As the case itself boasts in a rather tasteless red banner across its top, Something Wicked was the last movie in which the late Brittany Murphy appeared. If this uncomfortably poor attempt at a cerebral horror film will be remembered for anything, it will be that. Well, that and the fact that Murphy probably deserved to have been able to put a better final credit to her name.

While celebrating her graduation with her parents and boyfriend James (John Robinson, “Transformers”), Christine (Shantel VanSanten, “The Final Destination”) finds her life starting to take a turn for the worse. First, James indicates his desire to marry her, only to be shot down by her mother — an exceedingly rude and pretentious English professor — and her desire for Christine to pursue her education further before taking such a step. Next, while Christine is sleeping on the ride home, the car, which James is driving, is struck by a train, killing her parents but leaving the young lovers alive.

At least, a year later, once Christine has moved in with her much older brother Bill (James Patrick Stuart, “It’s Complicated”), a police officer, and his therapist wife Susan (Brittany Murphy, “Sin City”), James has successfully proposed, and she has started attending the University of Oregon, her life seems to be looking up again. Or is it?

See, strange things have started happening to Christine. She finds herself terrorized by real people at the school pool, the ghosts of her parents in the yard, and obscure Shakespearean messages scrawled on mirrors, car windshields, and china cabinets in her home. She might even, without her ostensible knowledge, be the object of the obsessive desire of a strange boy, Ryan (Julian Morris, “Valkyrie”), who works with James and whose father, John (Robert Blanche, “Bullet”) has been seeking Susan’s help on behalf of his troubled son.

When a campus security guard investigating the surveillance tape that shows Christine being attacked at the pool is murdered, and both James’ stolen cell phone and Bill’s stolen pistol are linked to the crime, Something Wicked begins to spiral into what was probably supposed to be an intricately plotted web of mystery and deceit, but was really an inconsistent, entirely unbelievable mess.

One of the hardest aspects of Something Wicked to watch was the deplorable treatment of Susan. A therapist who spouts such unrealistic and poorly researched pop psychology soundbites that they stand out in a genre fraught with them, Susan is otherwise entirely characterized by her devastating fertility problems, has a terrible, cheating husband who lusts after his own sister, and, after witnessing a random and inexplicable vehicular manslaughter, has a complete psychotic break that renders her entirely useless for the rest of the film. At one point she is shown in a bathtub, mascara running down her cheeks, blathering about how Christine clearly has two different personalities and is making up everything that has happened to her, even though the audience has never been shown any evidence that even remotely suggests this and, again, there is literal video footage of the first time she was harassed.

Equally aggravating are other implausibilities; Christine swimming in the campus pool at night, alone, in a bikini, with the lights off; Ryan even possessing the close up glamour shot of Christine that he apparently uses as a bookmark; the ability of a train to destroy exactly one half of a car and leave the inhabitants of its other half unscathed; the fact that Bill simply walks away from the Internal Affairs guy trying to investigate the use of his gun in a murder; the fact that Bill goes on to allow yet another one of his guns to be taken right out of his car . . . And that’s not even mentioning the inexplicable inclusion of constant, heavy handed Macbeth references (from Christine’s mother in the first scene to Ryan’s teacher talking about the symbolism of the three witches) which are in no way allegorically or even tangentially related to the themes of this film.

Worst of all, though, has to be the ending, which comes completely out of left field and, if believed, actually contradicts the majority of the events that preceded it. In spite of droves of cinematic evidence to the contrary, there actually is a difference between a plot twist and a complete non sequitur, a difference which the makers of Something Wicked appear to have absolutely no understanding of.

To pick a similar example, the ending of “Scream 4” reveals that one of its main characters was not the innocent girl she appeared to be all along, but rather a darkly manipulative villain who has had a hidden agenda. While this especially campy installment of a series whose gravitas significantly deteriorated after its first iteration isn’t particularly good on its own, it still manages to pull off that twist far better than Something Wicked does, proving that it’s not impossible to do — even in an otherwise bad movie — it just did not work here. I mean, not that this comparison isn’t a huge stretch, but classics ranging from “Primal Fear” to “The Sixth Sense” almost entirely rely on just such a surprise.

Contrarily, Something Wicked, from start to finish, is a wince-worthy attempt at throwing a bunch of shit at a wall and hoping even some of it sticks. Victims are killed by cars, trains, pistols, sawmills, and shotguns. There is adultery, incestuous attraction, marriages, proposals, and dubious trysts. None of it makes sense, and even less of it has anything to do with Macbeth. If you want a scary movie that does call upon the Shakespearean tragedy, check out Kurosawa’s 1957 drama “Throne of Blood.” If you’re interested in a similarly off the beaten path, less than perfect but enjoyable horror film with a significantly more interesting twist, try “Cry_Wolf,” a movie where the actor who plays Ryan is put to much better use. 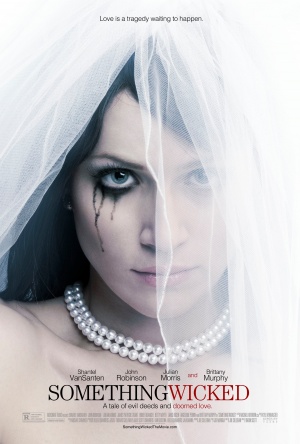