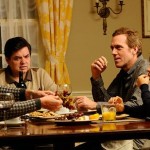 The Oranges borrowed the underlying suburban malaise of “American Beauty” and remolded it into a comedy. West Orange, New Jersey resembles the 2000 Best Picture winner but the atmosphere is different. The characters still make horrible choices which impact their immediate families and friends, but the looming dread and depression are replaced by a lighter air, snappy one-liners, and does its best to keep the grief off screen.

Two families live directly across the street from one another. The husbands, David (Hugh Laurie) and Terry (Oliver Platt), go jogging together every morning, barbecue together in the afternoons, and sip drinks together at night. The wives, Paige (Catherine Keener) and Carol (Allison Janney), sip wine most of the day and do their best to ignore their husbands. This is not a “Bob & Carol & Ted & Alice” situation either, the adults in these families are close, but platonic. David and Paige’s daughter, Vanessa (Alia Shawkat), moved back home after college to work on her design portfolio; therefore, some years later she still lives at home, works at a local furniture store, and haphazardly works on her portfolio. Terry and Carol’s daughter, Nina (Leighton Meester), disappeared after high school to travel which is code for go to cool cities she has heard about to party.

Each character and couple in The Oranges have their idiosyncrasies to not only help the audience tell them apart, but to establish them in a pattern so they have either an obstacle or an epiphany later on when the plot requires it. David and Paige have marital problems. They are in counseling but David is obviously spending most nights out back in his man cave. Terry and Carol seem fine but it appears to be more of a case of “Don’t rock the boat.” Nina unexpectedly descends upon the households for Thanksgiving gracing everyone with her presence. It is gracing because Nina does not have the most stellar attitude. She is crass with her parents by rolling her eyes at their natural and expected questions and though she strongly denies it, Nina is a natural troublemaker. She has been all the way to San Francisco and back so now she has all of this world experience which her suburban parents just wouldn’t understand.

It takes only a few days for Nina and David to kiss, act awkward around each other, and then get busted at a motel room by Nina’s mom. Boom, the families are split apart. Now, in “American Beauty,” someone would probably wind up dead here. In The Oranges, many of these break-up scenes are played for laughs, mostly by Terry whose stuttering words and faux attempts at outrage take the tension out of the room. The most aggrieved party here should be Paige. Sure, the couple had marital problems, but her husband is cheating on her with a 24 year old! So, what does the script do to Paige? It writes her out of it. Paige disappears for most of the middle of the film to a hotel room leaving David and Nina to flaunt their selfish relationship in front of all the shocked onlookers.

Why selfish? David and Nina try and explain that they are both happy and isn’t that the most important thing in the end? Those two might be happy, but the five other people directly affected by their affair are devastated. Well, they would be devastated if this family drama was handled as a dramatic film, but the audience must remind themselves that this is a comedy. The two writers credited with the screenplay are Ian Helfer and Jay Reiss; it does not come as a shock to find out this is their first feature film script. Not too many writers would have the idea and then courage to say, “Hey, let’s make a funny ‘American Beauty!'”

The Oranges is not completely horrid; Oliver Platt is quite funny to watch but that is about all the movie has going for it. David and Nina’s relationship turns out to be the catalyst each separate character needs to change their lives all for the better. One starts getting in shape, one discovers charity, and another acts on a long delayed life move. A ridiculous affair turns out to be just the right kick in the butt people need to turn their lives in the right direction. If only it worked out like that in real life too . . . 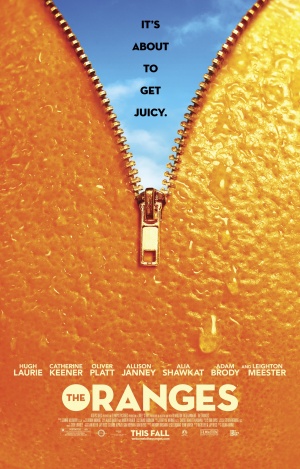