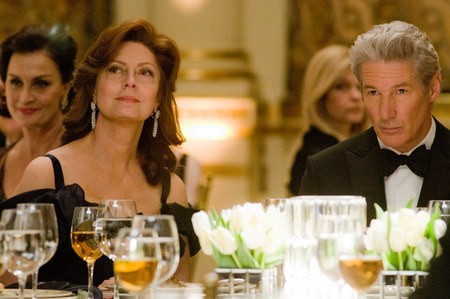 Robert Miller (Richard Gere) is guilty of multiple felonies including involuntary manslaughter and investment fraud, but he is not really an evil man. In fact, the audience is on his side in Arbitrage; you want him to win and get away with it all. You feel this way not because you’re callous and root for the villain, but because the film’s writer/director, Nicholas Jarecki, creates complex situations whereby innocent people will be hurt if the culpable party goes down. You root for the powerful billionaire instead of the persistent detective or any do-gooding truth seekers.

The Millers are a very powerful and wealthy New York City family. The patriarch, Robert, runs an investment firm who saw the housing bust coming. The rate of return they earn for their investors appears to be on Wall Street’s leading edge. Robert’s wife, Ellen (Susan Sarandon), is involved in multiple charities, is looking forward to retirement, and turns a blind eye to the secrets she is not supposed to know but seems to have a deeper insight of than most suspect. Their pride and joy is their brilliant daughter Brooke (Brit Marling) who is the Chief Information Officer at the investment firm. Robert has it all, family, successful business, friends; however, we learn quite quickly it is built on a foundation transforming very quickly from stone to sand.

The investment firm is involved in some very creative bookkeeping. This is not to the Bernie Madoff level, but it is noticeable. Robert made a bad bet and a lot of money is gone at the wrong time. His firm is going through an audit because a prospective buyer is about to buy the company and provide Robert and his family a very comfortable rest of their lives. If the audit, or even worse, Brooke discovers the missing money, Robert can kiss all of his hard work goodbye and say hello to a prison cell for the next 20 years. If this were Robert’s only problem, though, maybe he could devote his full attention to it, but he is about to become very distracted.

Contrary to his frequent proclamations and speeches, Robert does take his family for granted because he has a mistress. Julie (Laetitia Casta) is a fledgling artist but is doing fine because her entire life is subsidized by Robert’s affections and money. On a spur of the moment trip one night to atone for his chronic punctuality problems, Robert falls asleep at the wheel, the car flips, and Julie is dead. This is not a spoiler because 1.) the preview of Arbitrage gives it away and 2.) the vast majority of the plot relies on it. Robert is not the first billionaire in a movie with a dead mistress, but he lacks a true Mr. Fix-It. He cannot be at the scene of the crime because all of the police attention will scare away his company’s buyer and then he will have both the fraud charges and the manslaughter charges.

Robert calls Jimmy (Nate Parker). Jimmy is probably the one black guy Robert knows and for some awkward reasons, Robert thinks Jimmy will be cool enough to drive upstate, pick him up, and not snitch to the cops about it. The cop on the case though is Detective Michael Bryer (Tim Roth) and he is no fan of billionaires. Det. Bryer knows about the affair, knows Robert was the driver, and knows Jimmy went and helped him out. Jimmy is not talking though so the detective turns the screws by charging him with obstruction with an attached ten years in prison to threaten Jimmy to roll over on Robert. 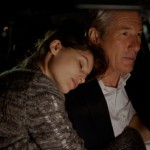 How many problems can one guy really deal with? Robert has the audit, the dead mistress, and the accomplice who can walk free if he just tells the truth about what happened. All of these events are effectively juggled by the script, the direction, and the actors. Every scene has some suspense attached to it because if the wrong person finds out about any of the enormous secrets circling Robert’s head, then it’s all over. Arbitrage is Jarecki’s first director credit; he was the executive producer on the great 2008 documentary “Tyson.” His debut work is so strong that his next effort will most likely garner a lot of attention.

Thoughtful and complex adult dramas of this caliber do not come along very often; therefore, do yourself a favor and go check it out. In fact, head to the bar afterwards, order your drink of choice, and sit back and think about it. Then look up the definition of Arbitrage — it turns out it is a real and most fitting word. 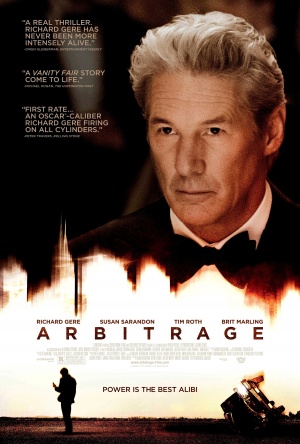