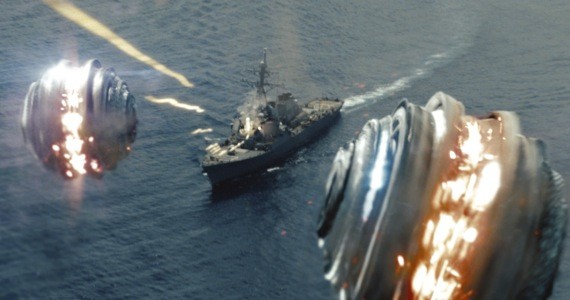 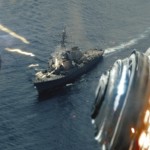 Picture it — a grizzled veteran cop showing the ropes to a rookie is tasked with solving a brutal murder of a young Hollywood starlet. Few clues were left at the scene, save for a red chip with the cursive letter “H” imprinted upon it — a calling card of the killer. A week later, a second girl is brutalized. The week after that, a third. The detectives know they must connect the dots before this maniac gets his (or her) fourth victim in a row . . .

Agreed, the plot for my action-fueled, detective thriller, “Connect 4” is rather weak, but so is the one for Battleship (and “G.I. Joe: The Rise of Cobra” and “Transformers: Dark of the Moon” come to think of it). They all share a common thread other than being predicable, explosion-filled fodder, however; they’re all properties owned by toy conglomerate, Hasbro. But whereas the G.I. Joe and Transformer toys had a built in path to the big screen, a boring turn-based board game didn’t. Solution: Add invading aliens! Absolutely stupid, invading aliens!

We should all hope, no, we should all pray that when aliens come to our planet to enslave us they’re all ill-prepared and idiotic as those in Battleship. Sure, they got themselves some awesome animalistic type of vehicles brandishing some innovative weaponry (which the computer effects department must have had a field day rendering) but these lizardy aliens have no concept how to use them or wage an effective war. It also gives rise to the notion that any jackass can save the world.

Our jackass is Lieutenant Alex Hopper (Taylor Kitsch, “John Carter”). He’s a routine fuck-up, who reminded me of Chris Pine’s Captain Kirk in “Star Trek,” only portrayed with 150% less heart or likability. Nonetheless, his Navy career having big brother Stone (Alexander Skarsgård, “Straw Dogs”) watches out for him and Alex has somehow managed to get the hottest girl in the world to love him (Brooklyn Decker, “Just Go with It”). He also just happens to be a part of the Japanese-United States naval games in Hawaii, where coincidentally, high powered satellite transceivers have invited the none-too-smart aliens to come kick our ass. 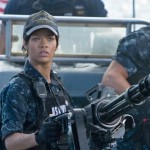 With much pomp and circumstance the invasion begins, things blow up, and lots of people die, including Alex’s bro. It’s sad really, as he was the only good character in the story — screenwriters Erich and Jon Hoeber didn’t bother to write anyone with a shred of resonating personality (even though 40 minutes are so are used for character introductions). But Stone’s death is the driving force for Alex to extract his head from his own ass to become the man he could be — the man his brother always saw him being. The one we wish he’d hurry up and become so this mess of a movie could end already.

And end Battleship does . . . eventually. Alex assumes control of the lone destroyer left out in sea and sets about exacting revenge, with, no I’m not kidding, a few coordinated strikes that resemble the board game! A perfect tie-in to the merchandise! The only thing missing was having Alex shouting, “B-8” and having an exosuited alien bemoaning, “You sank my super-duper frog shaped intergallatic battleship.” 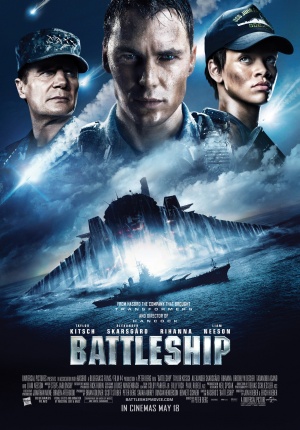