In his powerful and beautifully realized documentary, Tower, Keith Maitland (“A Song For You: The Austin City Limits Story”) movingly recreates the shock and heartbreak of the random shooting of 49 people at the University of Texas in the summer of 1966. The attack was the first mass shooting at any school in the U.S., but sadly, it was not to be the last. With seven guns and over 700 rounds of ammunition, 25-year-old Charles Whitman, a troubled ex-marine who had already murdered his mother and his wife, opened fire at 11:48 a.m., and kept firing round after round for one hour and 36 minutes before being shot and killed by police officers. When the carnage had stopped, there were 16 dead and 33 injured. It was a tragedy that those involved were never able to forget, though many tried to suppress its awful memories.

Using the technique known as rotoscoping, Maitland interweaves the animated recreations with archival footage, interviews culled from Pamela Colloff’s 1996 Texas Monthly article “96 Minutes,” and real-life images of the victims both at the time of the tragedy and as they are today, talking about the events 50-years ago. With devastating intensity, the film allows us to be witness to the tragedy as it unfolds minute–by-minute, hour-by-hour, allowing us to be present to the impact on the victims and those who risked their lives to save them. Tower builds up tension from the opening sequence as reporter Neal Spelce (Monty Muir, “Motorcycle”) is seen driving towards the campus, warning everyone to stay away from the University area because a sniper is “firing at will.”

The first victims are Claire Wilson (Violett Beane, “The Flash” TV series), a pregnant 18-year-old freshman walking to class with her boyfriend Tom Eckman (Cole Bee Wilson) after a coffee break. As the horrific sounds of the shots ring out, both are hit and fall to the ground, depicted in almost dreamlike fashion as white silhouettes falling against a background of bright red. The camera stays with the pregnant Claire who remains conscious while lying on the concrete in 100 degree heat, the unmoving body of her boyfriend lying next to her. Miraculously, another student Rita Starpattern (Josephine McAdam, “The Honor Farm”) risks her life to keep Claire alive by lying next to her and engaging her in conversation. Rita’s heroic efforts continue until the wounded girl is rescued by John (Artly) Fox (Séamus Bolivar-Ochoa), a student who, along with a friend, risks gunfire to carry Claire to safety.

The tragedy mercifully comes to an end when officers Ramiro Martinez (Louie Arnette, “Light from the Darkroom”), Houston McCoy (Blair Jackson, “Varsity Blood”), and the deputized Allen Crum (Chris Doubek, “Boyhood”), ascend to the observation desk to subdue Whitman while dodging bullets from well-meaning amateur gun owners on the ground firing up to the tower. Some of the most moving scenes of the film occur near the end when Maitland interweaves actual footage of the survivors as they reflect on the incident. In addition to Claire, interviewed are Aleck Hernandez Jr., a teenager delivering newspapers on his bicycle with his cousin when he was shot, Brenda Bell, a student who observed the shootings from afar, and Allen Crum, the bookstore manager who helped subdue the shooter.

Crum, Martinez, and McCoy talk about whether or not they could have gone up to the tower sooner and Claire introduces us to the Ethiopian boy she adopted (she also sponsored 26 of his family members to come to the U.S.), though admitting she still dreams about reuniting with the child she lost in the killings. As some witnesses break down in tears, it is clear that the trauma associated with the events of 1966 has not disappeared, though some are talking about them for the first time. Though Tower never becomes overtly political or uses the incident to advocate for gun control, Maitland’s reminder of the subsequent mass killings at Columbine, Newtown, Colorado Springs, San Bernardino, and too many others say all that needs to be said. 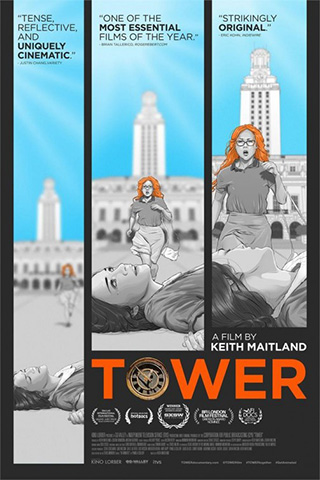