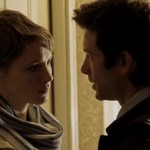 Though Upstream Color is supported by many other professionals in the field of visual and audio effects, it is mainly the product of one man, Shane Carruth, who is the director, producer, writer, cinematographer, composer, and co-star. It is no secret Carruth’s films play with our minds but, though his latest film is enigmatic and almost mandates repeated viewing, it does not reach us on the level of rational understanding, but on the level of being. Dreamlike and haunting, with its exquisite cinematography and poetic musical score, it is a film of mood and silences that evokes the work of Terrence Malick.

The opening segment deals with mind control as a young businesswoman named Kris, powerfully performed by Amy Seimetz, is drugged and abducted by the man known in the credits only as “The Thief” (Thiago Martins). Forced to ingest a live worm whose larvae is found among the leaves of blue orchids, she loses her sense of self as an independent being and is compelled to execute the thief’s commands. She sells her house and gives The Thief all of the proceeds. Copying pages from Thoreau’s Walden, she robotically folds them to form a chain. Thoreau’s book appears in several different scenes throughout the film but what its presence means is unclear. Though its theme is mainly “back to nature,” it is also about expanding one’s conscious awareness.

When Kris is finally released from hypnosis, she wakes up in an SUV on the freeway, her body covered in wounds, without any memory of her experience. On returning home, there is a puddle of blood in her kitchen and she discovers that she has lost her job. Seeing a roundworm underneath her skin, she tries to remove it with a kitchen knife but without success. Another character is now introduced who is known as “The Sampler” (Andrew Sensenig). His use of electronic sound waves brings Kris to his farm where the worm is transferred from her body into that of a young pig that is somehow connected to her. Later Kris meets Jeff (Shane Carruth), on a commuter train and they experience a strong mutual connection.

Reaching out to each other, it is not long before they realize that they have shared similar experiences. To the outside world, Kris tells people that she is mentally ill while Jeff admits to being a drug addict but lies about his professional job status. Unable to come to terms with their past, both engage in compulsive behavior as they struggle to deal with their discordant memories and fears. Depending on your outlook, Upstream Color is a spiritual, scientific, or romantic film but, regardless of your interpretation, it will challenge you to engage both your mind and your emotions. For me, it is not a thriller about worms or pigs but a film about discovering newly who we really are, our capacity for love, and our connection to nature and to each other. 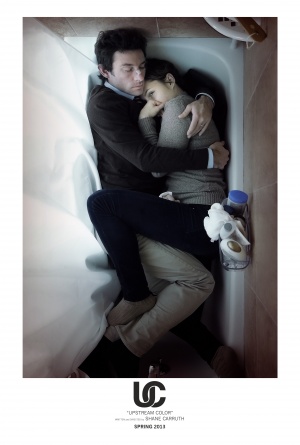