Nicolas Cage (“211”) generally uses a couple of different gears of crazed for his movies nowadays, one a sort of wild-eyed screaming banshee and the other not so much. In Grand Isle, he dials it back ever so slightly to give us the kind of unhinged lunatic that most audiences (me included) find entertaining. To put it another way, there are movies in which Cage’s character is whacked out but still seems to have a plan, some kind of vision for the way he wants things to go. He still has some kind of control over himself and has an endgame in mind. And then there are all the times he plays his role to the deranged hilt. I’m happy to report this role falls into the former category.

Cage is Walter, an alcoholic apparently stuck in a loveless marriage with Fancy (KaDee Strickland, “The Family That Preys”), who’s herself the very definition of a Georgia peach. On the day that a big ol’ hurricane is about to hit the titular island om which they live, Walter hires a handyman named Buddy (Luke Benward, “Life of the Party”) to fix a small section of the picket fence in the front yard. Buddy’s having troubles of his own, as he’s a bit cash-poor and needs to provide for his young bride and his newborn. So, on the shortest notice, Buddy agrees to fix the small bit of fence while Walter continues to ready his home for the incoming storm.

Buddy wants to finish up so he can get back to the missus and the little’un, but he’s delayed numerous times by the drunken antics of Walter and the amorous actions of Fancy, which of course leads to him riding the storm out in their nice house. And that’s when the fun begins. The spouses each try to play Buddy off of the other, goading him and seducing him to who knows what ends. Meanwhile, there’s a door to the basement that has, like, ten locks on it. Who does that? “Nothing down there!” Fancy says with cheer. We all know what that means. Even Buddy, who doesn’t seem to be banking on his brain to get through life, knows what that means. The young man also has to talk military with Walter, who apparently was in ‘Nam (even though he looks young enough to have seen action in Grenada or Afghanistan) while Buddy just got back from a harrowing overseas incident of his own with the Navy. The psychological games among the three of them play out over much of the night, with befuddled Buddy taking the brunt of the abuse.

All of this is told in flashback by Buddy to a hard-as-nails detective (played more-or-less convincingly by Kelsey Grammer, “Transformers: Age of Extinction”). You know, the old let’s-get-this-story-on-tape-during-your-interrogation thing, an old storytelling device used in countless police procedurals. Buddy, it seems, has been accused of murder — whose, we don’t yet know — and he’s telling his side of the story to Grammer. So we know from the beginning that Buddy’s alive at the end of the night but are left to wonder if he killed Fancy or Walter. Or neither.

The story follows some logical sense, and the characters make understandable and consistent (if not rational) choices. Both Fancy and Walter are conniving miscreants, but what’s really their end game? Are they truly at odds with one another, or are they playing in order to entrap Buddy, whom they know is down on his luck? There’s a twist near the end that makes sense and isn’t telegraphed too explicitly beforehand, although the audience’s opinion may vary.

My advice is to not think too much about the plot and enjoy strong performances by Strickland and Cage, offset by a somewhat uneven showing from Benward. The interrogation framing method is well utilized as well, but it’s really the performances that sell Grand Isle and allow it to overcome its narrative deficiencies. 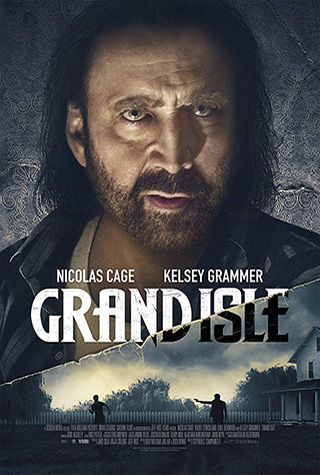