In a phenomenal pairing, two powerhouses of the British stage join forces for a film which depicts the disastrous consequences that occur when their lives unexplainably intertwine. Ian McKellen (“All Is True”) is Roy Courtney, a man with a murky past and plenty of questionable connections. After arranging to have dinner with Betty (Helen Mirren, “The Nutcracker and the Four Realms”), a woman he meets online, he gradually begins to ingratiate himself into all aspects of her life; first her home and then into her bank balance. However, Betty has a loyal protector in her grandson, Steven (Russell Tovey, “Mindhorn”) who harbors some dark suspicions about her new companion. As the couple spend more time together, they soon learn that the secrets they have buried lead to some unwanted discoveries.

Mirren and McKellen are both titans of the theater and have proven they can make the transfer to film and be just as commanding such as in “The Cook, the Thief, His Wife & Her Lover” (Mirren) and “Gods and Monsters” (McKellen). However, as we have also seen, they can make choices that don’t seem to stretch their acting capabilities and can produce some very mediocre results as evidenced in “Calendar Girls” (Mirren) and “The Da Vinci Code” (McKellen). Sadly, Bill Condon’s The Good Liar belongs in the latter category and while it’s indisputable that Mirren and McKellen are both magnificent actors who own every word spoken with confidence and believability, I couldn’t help thinking throughout that they probably had a much better time making this film together than I did watching it.

Adapted by Jeffrey Hatcher (“Mr. Holmes”) from the novel written by Nicholas Searle, The Good Liar touches on multiple genres and could be easily categorized as crime, thriller or even revenge drama. However, at its heart the film is a reflection on the art and powers of deception; how our understanding of what we see can often sit in conflict with the truth and by extension the conjoining of the past with the present. The opening scenes provide us with referential nods to the title which, whilst very on the nose, are skillfully executed allowing for moderate enjoyability. We switch between Roy and Betty as they register to an online dating site, both selecting carefully their preferences, editing their own truths and choosing which small lies to tell. As we move between shots of their faces starring into the laptop monitors juxtaposed with images of them peering into the screen we are watching them on (a reflection is even shown in McKellen’s glasses at one point), the themes of appearance and deception are firmly sowed. What follows is a journey through a series of heavily staged and at times overwritten sequences that depict the evolution of their relationship. In a nice touch, there is a premature admission from them both during an early meeting that they’ve been using false names thus luring the viewer into assuming they are both starting on an equal footing.

It would be impossible to go into any kind of detail about the two major plots twists which The Good Liar concerns itself with as any slight hint would give the game away completely. However, it’s safe to say that unfortunately, even with the stellar performances it doesn’t do enough to convince me that what is happening is plausible, a factor that is mostly attributed to the writing. While the piece is undeniably an exploration of identity, how we see how ourselves, how our history has shaped who we are and who we can become in order to achieve our desires, it also jeopardizes the effectiveness of who knows what by revealing too much too early on. Thus, any tension and suspense is negated and we are left with a sense of going through the motions that take us towards the climax as opposed to feeling genuinely compelled at what is taking place. The Good Liar offers an entertaining couple of hours, but with its inconceivable, high-concept plot twists and scenes that are overcomplicated (and therefore, devoid of purpose) Bill Condon’s latest work would be better placed as a television drama rather than a cinematic film going experience. 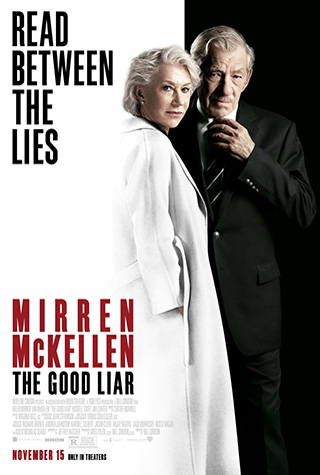