Inspired by true events, Bilal: A New Breed of Hero tells the story of a real hero who earned his place in history after liberating himself and inspiring others to do likewise. This Arabic animated feature is intoxicating and beautifully drawn. The animation is textured and multidimensional, almost reminiscent of cutting-edge video game graphics. There similarly exists texture and dimensionality to the main characters and the story, which interweaves the beginnings of Islam with one man’s struggle for equality and freedom. Bilal’s fight for personal independence parallels the continued fight for freedom of religion.

Like so many heroic origin stories that came before (but chronologically after), Bilal’s begins in tragedy. Young Bilal (voiced by Jacob Latimore, “Collateral Beauty”) is playing in the yard with his sister. He is pretend sparring with a wooden sword and bucket-headed adversary. This fictitious fighting is intercut with warriors charging across the dark desert on horses whose eyes glow bright red, foreshadowing the fight to come. In reality, this is young Bilal’s present. Devils raid his village and tragedy inevitably follows.

In the film, much is made of lineage and birthright. Without ties to their own, Bilal and his sister, Ghufaira (voiced by China Anne McClain, “Grown Ups”), are sold into slavery. Bilal’s only remaining link to his mother and his former freedom are the nightmarish dreams and dreamy nightmares during which she speaks to him. To her confused and constrained son, she conveys, “Being a great man means living without chains.” Placing a hand over his heart, she indicates Bilal will never be free as long as he harbors anger, vengeance, and fear. Bilal’s origins are borne out of childhood trauma. His motivations symbolize a new breed governed by love not hate.

The real-life Bilal was known for using his beautiful, melodic voice to call people to their prayers. When given his master’s permission to speak, Bilal finds this voice and his purpose in fighting for justice and equality. By breaking free of his own chains, he strives to liberate and protect others. In front of the master’s many advisers, he arrestingly sings: “Distant shadows / Mother please hide as the sky sends down its tears.” Bilal sends down tears of his own. He doesn’t shy away from his emotions, instead showing his vulnerability and instinct for introspection. For those who look within are awakened. Rather than shutting it out, he allows his pain in. It gives him strength and inspiration as he tries to live up to his mother’s vision of him.

As Bilal (now voiced by Adewale Akinnuoye-Agbaje, “Suicide Squad”) strives to look within, most in his community seek to commune with false gods and idols. Fear compels people to seek refuge in gods as opposed to themselves. For Bilal’s master Umayyah (voiced by Ian McShane, “John Wick: Chapter 2”), bribery and greed eclipse piety and devotion. He views idols like ideals, symbols to be bought and sold. According to Bilal, “I worship whatever empowers me. You worship something that will destroy you.”

This story is as much about faith as freedom, following one man’s journey to find liberation in and from both. God, or perhaps His absence, is seen in the actions of men. Bilal is ordered to kneel before his master, an act of submission in this context, though seen as devotion in another. When building a gathering place, Bilal carries wooden beams over his shoulder, calling to mind Jesus taking up his cross. While “exiled” in the desert, a eagle is seen snacking on a snake. Later, this same eagle flies over Bilal, who is on horseback riding toward the city. The eagle with its keen eyes symbolizes perspicacity, courage, and fairness. Bilal is the eagle — king of the skies and messenger of the highest gods. When Muhammad announced his prophethood and started to preach the message of Islam, Bilal renounced idol worship and became one of the earliest converts to the faith. Bilal is the messenger and the message, a man held up as an idol, reverent and revered.

The film’s structure is part straightforward Disney-like narrative and part theological text. The narrative ideology, simplified for mass consumption, is elegantly mapped onto Bilal’s true story: Orphaned Bilal and sister are sold into slavery; they are governed by an evil master; Bilal seeks the counsel of a wise, noble mystic (meant to be the Islamic prophet Muhammad); he is tortured for not forsaking his religious beliefs, sold to Abu Bakr, and granted his freedom; a battle-weary warrior teaches him to fight, culminating in an epic battle between good and evil.

The imagery of this battle is quite brutal. As Bilal embraces his vulnerable side, he and the film do not shy away from violence either. Bilal gained freedom with his voice and message, and the film seems to condone the use violence to hang onto that freedom. Though, heroism through violence is antithetical to his mother’s teachings and somewhat muddles the message of Bilal: A New Breed of Hero. In the end, Bilal confronts the dark parts of himself and the world in his effort to banish them with illumination and forgiveness. There will always be shadows in the distance, we must seek out the light. 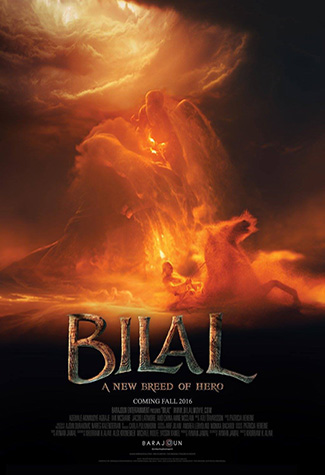