We all know that, in today’s world, telling the truth may set you free, but it can also make you an inmate or a corpse. Activist folk singer Joan Baez, however, reminds us that, “Courage has to do with being afraid and doing what you have to do anyway.” It is a fitting description of whistleblower Edward Snowden, whose story is told by the Oscar-nominated American filmmaker Laura Poitras (“My Country, My Country”) in her intimate and intense documentary Citizenfour. Snowden, a 29-year-old former NSA contractor and intelligence analyst, aware of the serious personal and legal consequences, nevertheless exposed the fact that the government, in the name of fighting terrorism, was spying on all American citizens and those of other countries, in every area of their lives, whether they were suspected of wrongdoing or not.

According to Snowden, he was able to access anyone’s records, bypassing codes, passwords and encryptions and said, “We are building the biggest weapon for oppression in the history of mankind.” As the film begins, Poitras tells us in voiceover that, when she was working on a film about the dismantling of personal freedoms after the terrorist attack on 9/11, she began to receive encrypted e-mails with the codename of Citizenfour, revealing the desire to come forward with startling information about government surveillance. One of the e-mails told her that “In the end, if you publish the source material, I will likely be immediately implicated. I ask only that you ensure that this information makes it home to the American public.”

Citizenfour almost exclusively relies on edited conversations, mainly between Snowden and author and journalist Glenn Greenwald interspersed with TV news reports, courtroom trials, and Senate hearings where officials are shown lying at hearings about the government’s role in data collection. It does not pretend to be objective and there is no debate about any of the issues brought up in the film or the efficacy of Snowden’s actions. It is his story, told from his point of view. Interviewed by Poitras (who is unseen), Greenwald, at the time working for the Guardian, and reporter Ewen MacAskill in a room at the Mira Hotel in Hong Kong where Snowden remained in seclusion for eight days, the heretofore unknown whistleblower reveals his identity for the first time saying that he wants to come out publicly as the source of the information, to show the NSA “I’m not going to let you bully me into silence, like you have everyone else.”

Snowden says that he made the decision to come forward because he feels there’s a great threat to the future of American free speech. “The elected and the electorate,” he says, have become “the ruler and the ruled.” Though he says repeatedly that he is not the issue and his personality should not deflect attention from the material disclosed, the human angle nonetheless becomes an important part of the film and we have an opportunity to assess the personality and character of a man who has already played an important role in history. Through all of the discussion of his methods and the nature of the material he revealed, Snowden presents his case in an eloquent manner, remaining calm and centered, saying that he anticipated the consequences and is prepared for them.

One of the few times he shows emotion is when talking about the government’s interrogation of his girlfriend who, he says, knows nothing about his activities. The tension is palpable, however, and the film takes on aspects of a spy thriller when, after the information has gone public, everyone in the hotel room reacts with paranoia to the fire alarm testing going on in the hotel. Communication, however, eventually reverts to coded e-mails which Poitras shows on the screen when Snowden seeks asylum in Moscow. Though it reveals no new information that hasn’t already been reported all over the world during the past eighteen months, Citizenfour is fascinating to observe as history unfolds before our eyes, offering the look and feel of immediacy, not that of a historical retrospective.

While it has taken several years, the warning message in Al Gore’s 2006 film “An Inconvenient Truth” on the potentially disastrous results of climate change seems at long last to be getting through, though even now, it may be too little, too late. When it comes to our right to privacy in today’s wired world, however, the prospects are not as bright. Though perhaps preaching to the choir, Citizenfour is an important reminder that in the words of the Rev. Martin Luther King, Jr., “Our lives begin to end the day we become silent about things that matter,” or those of abolitionist leader Frederick Douglass who said, “Power concedes nothing without a demand. It never did and it never will.” This film begins to crystallize that demand. 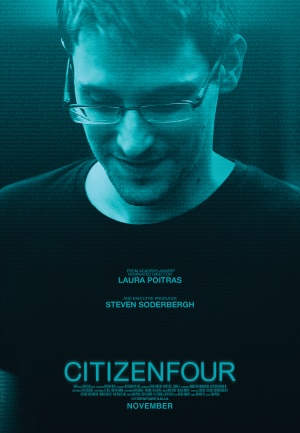