Perhaps there’s irony in the fact that it took Disney buying Pixar, sucking the animation giant into the maw of the even bigger animation giant, to jump start the studio’s feature animation production and give it the creative spark that once gave Pixar an arm up on its now parent company. Or perhaps it’s just simple math. When Pixar mastermind John Lasseter was added to the official Disney fold and began spearheading the animation branch, Walt’s beloved brand started revving up just as Pixar was slowing down.

Now, with multiple quality works in a row, including last year’s brilliantly revisionist princess pic “Frozen,” Disney feature animation is looking stronger than it has in nearly two decades. Their latest success clearly speaks to the impact of the company’s voracious appetite for other entertainment entities, as the cute, beautiful Big Hero 6 is a direct result of Disney’s Marvel purchase. With that connection, the movie is expectedly a superhero action flick, but other than the sub-genre and pilfered title, this is a genuine Disney experience through and through.

Using sumptuous animation to tell a tale of a kid who learns a valuable life lesson after being struck with horrible tragedy, Big Hero 6 is possessed of a big huggable heart. That heart beats sweetly in all facets of the story, but it’s personified (or, er, robot-ified) by squishy nylon nurse bot Baymax (memorably voiced by Scott Adsit). The creation of protagonist Hiro’s (Ryan Potter) big brother Tadashi (Daniel Henney), Baymax is destined to be a star with his innocent line deliveries, slow, waddling gait, and adorable appearance. He’s the quintessential Disney invention, an imaginatively designed creature with such soul that everyone in the audience will want to befriend him.

This is exactly what directors Chris Williams and Don Hall are banking on, of course, because much of their movie hinges on the budding relationship between Hiro and Baymax in what amounts to a sort of animated E.T. It’s easy to get on board with Hiro’s arc in this regard, because who wouldn’t want to go on adventures with a robot pal like Baymax? Williams and Hall smartly tap into that joyous pleasure center where the adventure is bouncily exciting, but they’re also keen to keep the focus on the dramatic meat of the story, so Hiro’s pursuit of the movie’s masked villain is driven by touching emotions and a rather stirring look at love and loss.

Even the antagonist is driven by love, so the theme has a special two-way significance. Everyone has meaningful, relatable motivation and so while the plot twists of Big Hero 6 are hardly its strong point, the hero/villain dynamic still leads to some interesting places as Williams and Hall tackle big subjects like the responsibility of wielding power and the importance of effectively applying great intelligence. Hiro is a boy genius, after all, and Baymax is the work of another genius, so the use of smarts and the specific tug-of-war between harnessing one’s big brain and the technological advancements that follow to help yourself and doing so to help others as a whole is a large part of what Big Hero 6 is concerned with.

Hiro learns his lesson through the added help of his brother’s equally brainy university classmates, a quartet of quirky characters that bring attitude and comic relief to the equation. Together, they all form the titular team thanks to the speedy fast-forwarding power of a fun montage sequence. That such a sequence is so dutifully employed here speaks to the movie’s adherence to a familiar formula, but the charm and magic of Big Hero 6 is derived from the tender treatment of these recognizable elements. There’s a heavy dose of classic Disney schmaltz in here that could feel like just another box being ticked off on a checklist, except Williams and Hall give the characters and situations such honest heft that the movie earns its emotions. Such is the great Disney way. Familiar, but fresh.

We’ve seen these pieces before, of course, but thanks to the animators, not quite as exquisitely as this. To call the animation gorgeous is fair in some ways, but it still undersells the visuals here. Disney soars so high with the computer-generated imagery in Big Hero 6 that the very idea of where they can go from here provides an overwhelming question mark. It simply seems that they’ve hit an unsurpassable peak now, achieving a look and feel that appears truly tangible, a world of living, breathing pixels textured and rendered to perfection. It’s another milestone in the studio’s long history of providing exceptionally executed images.

This all amounts to another warm hearted, carefully conceived and awesomely assembled adventure from a group on a roll. The Disney brand is rock solid right now and rightfully so. The studio’s artists have pushed the boundaries once again and while they’ve consistently proven that the sky is the limit for animated expression, the experience of Big Hero 6 is, visually speaking, a little like floating up in the clouds. 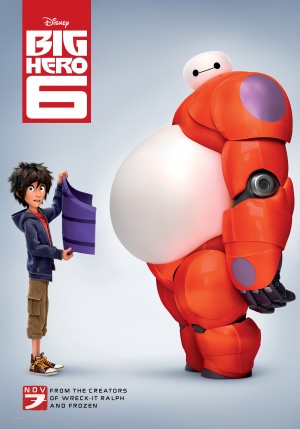