Watching Siskel and Ebert on television during the 80s and 90s was an important weekly event in my family. Their movie reviews, that included clips from each film, was a learning experience that offered entertaining and insightful opinions as to whether or not a film was worth seeing. Gene Siskel’s death in 1999 felt like a death in the family. Based on Ebert’s memoir of the same name, Steve James’ documentary Life Itself is a deeply moving celebration of Roger Ebert’s life, released just one year after his death in 2013 from cancer. It is an honest portrayal that does not try to sugar coat or gloss over his shortcomings.

Using archival photos, Life Itself touches on all aspects of his life, from his beginning as a journalist in high school to the last years of his life when his jaw was surgically removed and he could not speak, eat, or drink. The film shows him as a working reporter for the Chicago Sun-Times, winning the Pulitzer Prize for film criticism, struggling with alcoholism, co-authoring the Russ Meyer film, “Beyond the Valley of the Dolls,” and working on the television show with Gene Siskel that reached a nationwide audience and made him a household name. Also shown are outtakes of on and off-air bickering with Siskel, as well as anecdotes and testimonials from his friends, including some acid comments from Time Magazine Film Critic Richard Corliss and other reviewers.

Roger Simon, now with Politico, recalls how Ebert had the courage to stop the presses as an Editor-in-Chief for the Daily Illini when he thought something related to the Kennedy assassination was inappropriate. His drinking buddies at O’Rourke’s tell of his “terrible taste in women.” One of the funniest is a clip of Siskel and Ebert on The Tonight Show with Johnny Carson, where Ebert criticizes the film “Three Amigos,” while Chevy Chase makes funny faces in the background. Testimonials abound from filmmakers such as Steve James whose 1992 documentary “Hoop Dreams” was given a big boost by Roger, and from directors Errol Morris (“Gates of Heaven”), Gregory Nava (“El Norte”), and Ramin Bahrani (“Man Push Cart”) whose films he also praised on his show.

The most moving remembrance is that of Martin Scorsese who says that Ebert not only saved his film career but also his life. A remarkable presence in the film is Ebert’s wife Chaz who was there for him until the end, giving of herself each day in support. James’ filming began when Ebert was already hospitalized and there are painful scenes showing the results of Ebert’s several surgeries, including the excruciating procedure of draining a tube from his throat. Characteristically, Ebert continued working until the end writing his blog covering subjects in all areas of life whether or not they were movie-related.

Life Itself is a tribute to an individual who touched so many lives. It is without pretensions, gritty and down-to-earth just like Roger who is shown as a man who could be egotistic, who loved to hobnob with celebrities at Cannes, but was also a warm and compassionate human being. What made Ebert such a great writer in my view is that he was one of the few important critics who was willing to introduce films of new or obscure filmmakers to the public and call attention to small, independent and foreign films that most people may have never discovered. For me, however, his greatest quality was that his reviews were written from the heart in an intimate and conversational tone, without condescension.

Even more than that, he could write. That may sound obvious when talking about a writer, but it is not always the case. His reviews were not esoteric exercises in intellectual showmanship but concise, emotionally expressive, meaningful observations that were beautifully written and always connected with his experience of the real world. Nothing could be more fitting than Chaz’s description of Ebert’s last days (not in the film). “Roger looked beautiful,” she said, “He looked really beautiful. I don’t know how to describe it, but he looked peaceful, and he looked young.

“The one thing people might be surprised about — Roger said that he didn’t know if he could believe in God. He had his doubts (. . .) That week before Roger passed away, I would see him and he would talk about having visited this other place. I thought he was hallucinating (. . .) He described it as a vastness that you can’t even imagine. It was a place where the past, present, and future were happening all at once.

“It’s hard to put it into words,” she continued, “I just loved him. I loved him so much, I think I thought he was invincible. To tell you the truth, I’m still waiting for things to unfold. I have this feeling that we’re not finished. Roger’s not finished. To me, Roger was magic. He was just magic. And I still feel that magic. I talk to him, and he talks back.”

Life Itself gives us an experience of that magic. 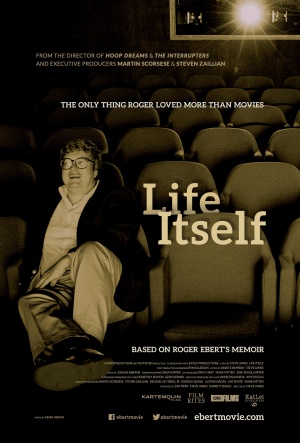