During the mid-fifties American puppeteer Jim Henson, and his muppets, a varied collection of custom marionettes, took the entertainment world by storm. Through the years, the most iconic has been Kermit the Frog, the only “amphibian” to address the Oxford Union, and also the first to receive an honorary doctorate from Southampton College. But although ol’ Kermie and his pals have been involved in a dozen-or-so television shows and just as many movies, after their inventor’s death, critical-acclaim dwindled. That is to say, until director James Bobin and screenwriters Jason Segel (who also stars) and Nicholas Stoller decided they had the cojones to bring them back, accepting the challenges of an entirely different generation of moviegoers. And in the case of The Muppets, it proved to be a worthwhile investment, and one that’s sure to please old admirers and newcomers alike.

The film is set into motion by Gary (Segel) and Mary (Amy Adams), two lovers, and their mutual friend (and the former’s roommate) Walter (voiced by Peter Linz), a slightly naïve “Everypuppet” with a confidence issue. They all live in the idyllic suburb of Smallville (the last place on earth where milk is still delivered to your door and your neighbors don’t completely hate you). As the last of a dying breed –Muppet fans — when the opportunity arrives to visit star-studded Los Angeles, they don’t hesitate in touring around the old muppet theater, which they find has long been abandoned and, with its contract about to expire, is in grave danger, as business tycoon Tex Richman (Chris Cooper) is eager to collect on the oil beneath it. Now, to keep the property safe, the trio sets out to reunite The Muppets, who, after a fall from fame, are either depressed, have found work as a high class plumber, or are prancing around as the fashion editor of Vogue Paris.

Now I always imagined The Muppets to have some sort of deeper meaning, yet amidst the self-parody, references to pop-culture, and a fear of sounding too pompous, I’ve been weary of looking too deep into them. But whether or not they were intended as hyperbolic representations of humanity, bizarre dissections of their creator’s psyche, or just talking puppets, matters naught, just as long as there’s a healthy dose of humor, and they’ve retained their quirks. Thankfully, that’s the case, as Kermit (voiced by Steve Whitmire) remains the team leader; Miss Piggy (voiced by Eric Jacobson) is still narcissist and obsessive; Animal (voiced by Jacobson) is still a beast on the drums; Fozzie Bear (Jacobson) continues to tell corny jokes; Gonzo (voiced by Dave Goelz) is more of a daredevil than ever; Statler (voiced by Whitmire) and Waldorf (voiced by Goelz) persist in their heckling; and, my favorite, the Swedish Chef (voiced by Bill Barretta) still speaks with a thick, almost undecipherable, accent. Even Walter, in his self-doubt and devoted fandom, becomes a welcome addition.

Countless cast interviews and press appearances have shown that the filmmakers are all very fond of the franchise. And they put a lot of love into the movie’s title troupe. However, that same can’t be said about their human counterparts. All we know for certain is that Mary’s a school teacher, and Gary, well, I’m not really sure what he does, but he’s a devoted Muppets fan. That’s simply not enough to want to invest in either of these characters, even if they do appear incredibly sweet and are played by two infectious performers. Thing is, it wouldn’t have been so much a problem had their onscreen romance been less relevant to the plot.

Blemishes aside, the film is still fantastic, and one of its highlights is the soundtrack. Supervised by “Flight of the Conchords” star Brent McKenzie, there are six new music numbers and three classic songs (“The Muppet Show Theme Song,” “Rainbow Connection,” and “Mah Nà Mah Nà”) performed throughout. Personal standouts include a surprisingly deep duet between Walter and Gary entitled “Man or Muppet,” and a hilarious rap recited by Cooper (whose asinine performance is another high point).

But all in all, although you can’t expect to be a changed person by the end of it, The Muppets proves that, under the right conditions, even old dogs can learn new tricks. The series’ first theatrical release in more than a decade shows that the magic is still there, and it marks a much appreciated return to traditional, non-CGI filmmaking. This Thanksgiving, that’s something I’m truly thankful for. 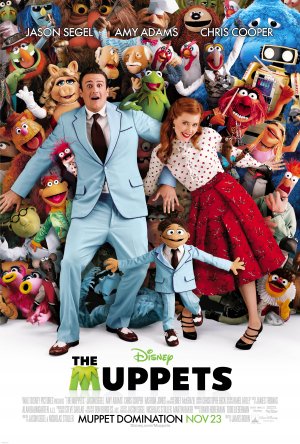