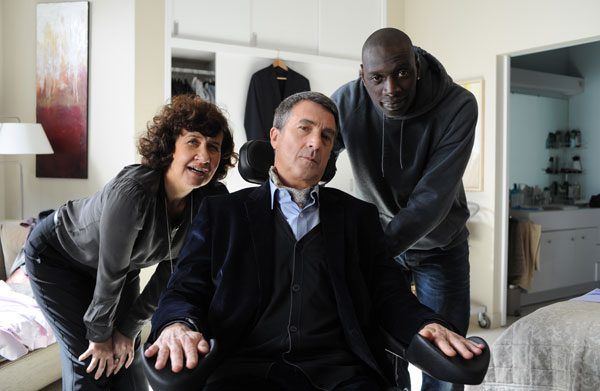 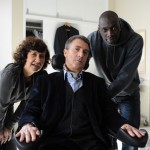 If you are looking for an alternative to blockbuster superhero movies or Hollywood cookie-cutter romantic comedies, you can do no better than Oliver Nakache and Eric Toledano’s film, The Intouchables. Though it has aspects that are familiar and even formulaic, the film redeems itself with its honest emotion and humane message of how vastly different people can learn from each other. Hugely popular in France where it earned $280 million (the second highest grossing film in their history) and was nominated for nine Cesar Awards, The Intouchables can make you forget, however briefly, the day’s headlines, and feel good once more about people and the world they inhabit.

Omar Sy, César Best Actor Award winner, is Driss, a poor Senegalese man from the ghettoes who is hired to take care of multimillionaire Philippe (Francois Cluzet), a quadriplegic from a paragliding accident. Based on a true story adapted from the memoir “You Changed My Life” by Abdel Sellou, Driss is an ex-con who served six months in prison for his part in a robbery and applied for the job in order to be eligible to receive government benefits after he was turned down. Surprisingly, Philippe hires Driss to be his caretaker, telling him that he likes people who “tell it like it is” without overt displays of pity or compassion.

The Intouchables begins with Driss driving Phillipe’s Maserati at dangerous speeds with Philippe next to him in the passenger seat. Stopped by the police, Driss tells the officers that his paralyzed friend must be taken to the hospital immediately as Philippe pretends to have a stroke. Exhilarated by their experience, the two men drive to the seashore to watch the waves in contemplative silence. The events leading up to the incident are then told in flashback. As Philippe’s recently hired caretaker, Driss moves into the aristocrat’s opulent Paris apartment and learns the job quickly. Before long, he is carrying Philippe from his bed to a chair, carefully dressing him, and even flirting with his assistant Magalie (Audrey Fleurot), but he does draw the line on some activities.

As a result of Driss’ high energy, Philippe begins to renew his enthusiasm for life and the two are drawn together by their love of music of diverse types, fast cars, and off-color humor. There are a few sub-plots including Philippe’s snarky teenage daughter (Alba Gaïa Kraghede Bellugi) and her problems with her mop-haired boyfriend, and that of Driss’ younger brother Adama (Cyril Mendy) and his fears of being the victim in a drug deal but they do not distract from what is essentially a two-character story. There is a lot of warmth and humor in the growing relationship. Driss introduces the staid Philippe to the music of Earth, Wind, and Fire to which Driss dances flamboyantly at Philippe’s birthday party, the young caretaker becomes Philippe’s barber, showing him some different and not too flattering mustaches, and they enjoy a hang gliding adventure in the French countryside. 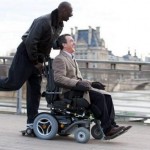 While some aspects of culture are ridiculed, the film shows respect for the arts in a way most Hollywood films never would. We actually listen to classical music, view paintings in a museum, and hear Philippe’s impassioned poetic letters to Eleonore, who lives in Dunkirk, a woman he’s never met. Driss also takes up painting and sells his first work for 11,000 Euros. Also, unlike mainstream American films that seem to exist in a vacuum, there are even references to real life contemporary figures such as Obama, Bush, and Nixon.

And while the opportunity is certainly present for mawkish sentimentality, Nakache and Toledano steer clear of that pitfall and opt instead for a genuineness and sincerity that allows us to truly care about each character. Though The Intouchables does have aspects of racial stereotyping, it can be enjoyed simply as a charming, warm-hearted, and funny depiction of friendship between two very different people who are willing to learn from each other about how to celebrate life. While happiness in their lives may still be elusive, in the words of existential psychiatrist Rollo May, “Joy, rather than happiness, is the goal of life, for joy is . . . based on the experience of one’s identity as a being of worth and dignity.” 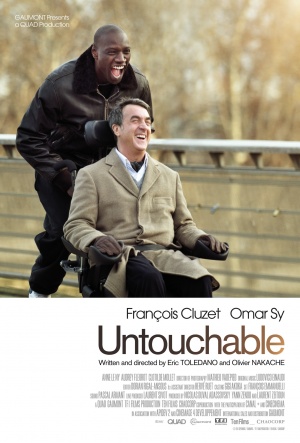