A good mystery movie doesn’t necessarily need a great mystery to work, but it certainly helps. So a bad mystery movie with a bland, boring mystery must be pretty damned from the start. That’s where Frank the Bastard finds itself, since despite having a mysterious title and a mysterious premise (a young woman confronts her past when she returns to the creepy commune she grew up in), the movie just spins its wheels as it looks for the dullest way to finally admit the pitiful details of its mystery plot.

At times, writer/director Brad Coley actually seems convinced he’s in control of a good mystery, so perhaps that’s where the film’s problems really lie. Whether Coley is delusional or not, Frank the Bastard embarks on a meandering search for the truth from the very start and only gets less interesting and more irritating as it clumsily progresses.

Our protagonist is Clair (Rachel Miner, “In Their Skin”), who is wracked with anxiety following her recently finalized divorce. During a relaxing evening with her best pal Isolda (Shamika Cotton, “Pariah”), Clair mentions the black hole where her memories of the past reside and how she knows only that she grew up in a Maine commune, the rest of the information buried too deep to recover.

Needing a reason to explore this further, Coley has Isolda insist on an impromptu road trip to the small town Clair once called home and then they’re off in search of whatever. It all feels rushed and forced and neither of the performances are good enough to give this even a whiff of authenticity, but the plot wants what the plot wants. So we arrive in the little town, where Clair and Isolda meet some nice old guys in a bar and then some not so nice guys outside the bar.

Ex-photographer and future seafarer Tristan (Chris Sarandon, “Fright Night”) is an amiable, trustworthy type that Isolda immediately takes a liking to, but he’s a mere bystander in this town compared to the local bullies who run the show. Led by Cyrus (William Sadler, whose career run as a nasty villain has seen much better, brighter days), who is followed by apparently half of the town’s men, the antagonistic group calls the shots around here and it becomes quickly clear that whatever piece of her past Clair is trying to retrieve is being kept hidden by Cyrus and his men.

Cue a bunch of back and forth between the different involved parties, as Clair and Isolda insert themselves into the town’s shut-in world and try to scratch at the surface of the mystery while Cyrus’s cronies try to bat them away as their boss preps for a big deal he’s near to brokering with a money-grubbing gas company. Cue more yawns, too. None of this is particularly exciting or engaging or remotely original as written and Coley manages to further cripple the picture with a blandly conventional approach completely devoid of creativity.

Several people in the town are aware of the tragic secret Clair is trying desperately to uncover, but no one wants to talk until Coley drags things out so long that there’s nothing left to do but activate the visually predictable flashback machine. Along the way, the titular character returns and helps Clair out in some ways, but it’s always a bit baffling why the quiet loner has the movie named after himself. I guess the Bastard title sells. Coley at least seems to think so. Isolda is a romance novelist and her latest book is called Love of a Bastard.

A quick search says that Coley’s movie was originally released under the snoozy title “East of Acadia,” so yeah, blah blah Bastard is probably a little more intriguing to have on the cover. Not that any of this matters. A good mystery movie doesn’t require a good title to work on any level and retitling this one to Frank the Bastard certainly does nothing to mask its general crappiness.

Anyways, as tensions mount in the small town and the truth comes slowly into focus, the big revelation, so teased throughout, ends up being pretty much what anyone could easily surmise from the evidence. The lack of surprise could at least be somewhat forgivable if the reveal was interesting in its implications, but it basically boils down to the message that some people are jerks and some jerks are arsonists. Something like that, at least.

With generic directing, mechanical writing, and transparent acting, Frank the Bastard doesn’t stand a chance. There’s room for an eerie, melancholic tale in here, but none of that potential is ever met. Coley probably deserves some semblance of credit for keeping a good pace, but that’s all the praise this reviewer can muster. With so many narrative avenues available, it’s baffling that Coley chose this particular path to wander. There’s nothing to see here that hasn’t been put through a cinematic meat grinder countless times before, so why bother? Who knows! It’s a mystery. 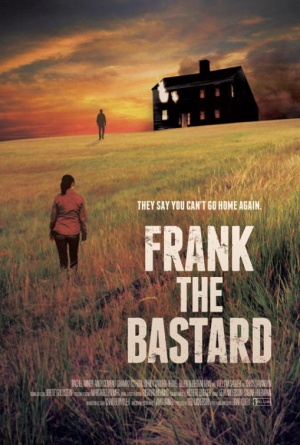