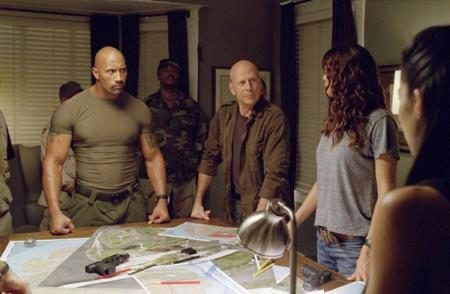 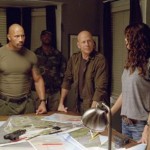 Loud, confusing, pointless and plotless are not exactly words one likes to use in a film review, but in this case, these terms are more than an apt description of G.I. Joe: Retaliation, the second G.I. Joe movie (the Hasbro Studio generation, not the classic 1945 picture starring Robert Mitchum). And like the company’s last venture, “Battleship,” this does no honor to the men and women of our military armed forces.

I wish, however, that I could report that it was loud, confusing, pointless, plotless and FUN, but in fairness, I cannot even do that (although it is infinitely better than the 2008 original production, “G.I. Joe: The Rise of Cobra“). G.I. Joe: Retaliation is just a series of explosions, gun battles and sword fights briefly interspersed with a theme about nuclear disarmament and a couple of scenes with Channing Tatum (“21 Jump Street“) and Bruce Willis, who, although is ten times more entertaining than he was in “A Good Day to Die Hard,” cannot save this enterprise. Likewise, neither can the presence of a genuine actor, Jonathan Pryce (“The Brothers Grimm“), in a double role as the U.S. president and an imposter to the office.

The “plot” has the elite commando “Joe” unit preventing a nuclear meltdown after the president of Pakistan is assassinated, but find themselves betrayed and almost wiped out by their own government. It isn’t their fault, however, since the Chief Executive is an evil Cobra operative in disguise. The three survivors, Roadblock (Dwayne Johnson, formerly “The Rock” and appearing in what seems his 20th picture of 2013), Jaye (Adrianne Palicki, the remake of “Red Dawn“) and Flint (D.J. Cotrona, “Dear John“), somehow make it back to the states, are hidden by an Ice-T clone, meet retired General Joe Colton (Willis) and plan their revenge. Meanwhile, something is going on in a monastery in Tibet having to do with Snake Eyes (Ray Park, “Ballistic: Ecks vs. Sever“) and Jinx (Elodie Yung, “The Girl with the Dragon Tattoo“) trying to stuff Storm Shadow (Byung-hun Lee, “I Saw the Devil“) into a bag. These mountain conflicts with a seemingly endless stream of Ninjas were impressive, but amazingly disengaged, almost as if director Jon Chu (the last two “Step Up” movies) just pointed the camera at the cast and then went on vacation.

As this is going on, we get a few tantalizing sequences with Jonathan Pryce gloriously chewing the White House scenery, insulting North Korea (hey, who could resist?) and blowing up London on a whim. As previously alluded to, his inclusion does not salvage this effort, but does make it go down — somewhat — easier. 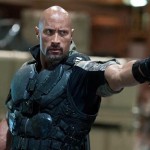 There are other elements to G.I. Joe: Retaliation, but none make it any better: Firefly (Ray Stevenson, “Thor“) cracks wise and releases explosive bugs, Roadblock gets to take on the U.S. Army in a dune buggy/tank contraption, Zartan (Arnold Vosloo, “Blood Diamond“) does his best Darth Vader impersonation and Walton Goggins (“Django Unchained“) as the smug warden gets his comeuppance.

Mainly, though, G.I. Joe: Retaliation is just a 12-year-old boy’s violence fantasy adventure with enough epilepsy-producing struggles that the identification of good guys and villains is reduced to simply hazarding a guess. Those familiar with “Snake Eyes,” “Storm Shadow,” “Lady Jaye,” “Roadblock,” “Jinx,” “Zartan,” “Firefly” and others may not have such a problem due to their closeness and affection for the characters, but to others like myself who could not care less, interpreting the differences is far too much of an effort to devote. 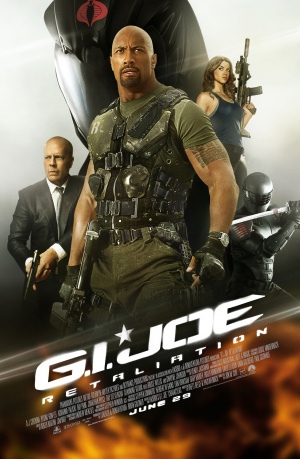