You will enjoy particular films even more if you do not know very much beforehand; think “The Sixth Sense” or “The Crying Game.” Previews of movies nowadays give away everything including the set up, the conflict, the climax, and sometimes even the ending all before you go and see it. The preview for The Skin I Live In sidesteps the problem of giving things away by only showing select scenes set to music. There is no dialogue to listen to for the potential audience member to find out who is doing what and why. Whoever had the idea to limit this preview did everyone a favor.

I will only cover the basics of the plot because you really want to go into this film as “blind” as possible. Robert Legard (Antonio Banderas) is a brilliant scientist and surgeon. He is on the leading edge of his field which has far exceeded standard plastic surgery. He has been involved in the first face transplants and is conducting extensive and methodical research into creating a new form of skin, one which is tougher than normal human skin whose practical application is to help burn victims but has the possibility to go much further than that.

At home, Robert is just as methodical and precise as he is at work. His live-in house keeper Marilia (Marisa Paredes) runs a tight ship to keep everything in order and Robert’s personal research lives upstairs in a locked room. Vera (Elena Anaya) is Robert’s captive and his prized research specimen. I will stop the set up description right here.

Directed by Pedro Almodovar, The Skin I Live In is a suspenseful thriller and verges on horror; however, in the director’s own words, it is a “horror story without screams or frights.” Robert is a modern day mad scientist, but instead of having an open lab with electricity captured from lightning bolts, he has a scalpel and a sterile workspace. Almodovar adapted the screenplay from Tarantula, a novel by Thierry Jonquet.

Since it is an Almodovar film, The Skin I Live In contains certain themes which are very common in most of his films. The first is that it has family secrets. Almodovar loves family secrets; think back to “All About My Mother” and “Volver” which were oozing to the core with them. He is a director who loves to go into people’s attics, find a chest full of dusty old secrets, pop the lid, and rip them out just like he would old clothes.

The second theme here which we have seen Almodovar cover before is gender identity. How society and individuals view themselves as male and female has always intrigued him, most recently in “Bad Education.” There are scenes here which reminded me a bit of “The Human Centipede” but it is nowhere near that tasteless or insane. The Skin I Live In wanders around a bit at first before you learn what is really going on and the reasons behind it. Once you learn that, you will understand it has not been wandering around at all, it has just been setting you up for one hell of a story. 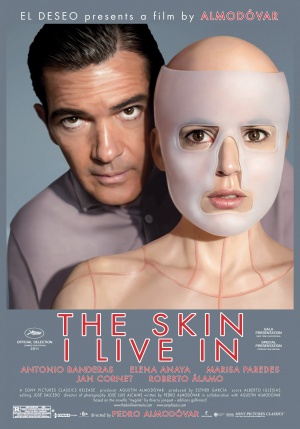