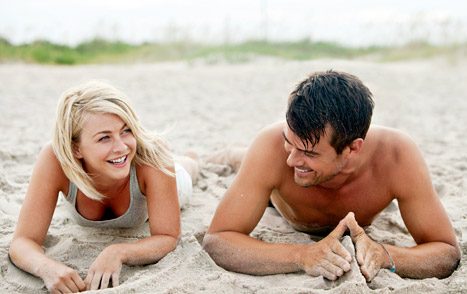 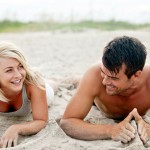 “We are so cute together!”

Since 2004’s “The Notebook,” which at least earned praise for the inclusion of veteran stars James Garner and Gena Rowlands, but catcalls for Ryan Gosling and Rachel McAdams (at least Gosling has become a better actor since), Sparks has become the antithesis to romantic dramas and to good film, in general. Follow-ups such as “Dear John,” “The Last Song” and “The Lucky One,” have all gotten progressively (or even exponentially) worse. That pattern continues with his latest Valentine’s Day release, Safe Haven, which is nothing more than “Sleeping with the Enemy” meets “The Lucky One.” In fact, during this picture I quietly prayed for Zac Efron to appear and make everything better again.

Directed by Lasse Hallström (the man behind such quality productions as “My Life as a Dog,” “What’s Eating Gilbert Grape” and “The Cider House Rules“), Safe Haven has a woman on the run trying to hide her identity but stumbles upon love in an unbelievably bucolic North Carolina fishing village.

Katie (“Rock of Ages” Julianne Hough, as in “hough” did she get up on the big screen? Answer, she’s living with Ryan Seacrest — talk about sleeping one’s way to the bottom) flees a murder rap in Boston in a bus and is trying to avoid a psycho police office (David Lyons, “Eat Pray Love“). Conveniently, she settles in South Point where few people speak, with the exception of general store owner Alex (Josh Duhamel, “Transformers“), a widower with a cute, ready-made Hollywood family (including the robotic kid actor who was so bad in “Playing for Keeps“).

He is smitten, but she’s a cold fish (remember, she has “secrets” that WE know about, but Alex does not). He makes small talk, she ignores it, he gives her a bicycle, she cannot accept it, etc., etc., etc. But of course, since this is a Nicholas Spark adaptation, you know love — and a certain amount of lust — is just lurking around the corner. 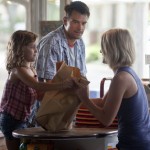 The spark is in the bag.

Soon, she discovers what a wonderful, caring, handsome man he is — and he loves children, to boot. Alex is, after all, a ’90s woman. In the third act, though, we know a certain cop will show up to add what little drama his arrival can add to a film like this and it takes a plot twist from the ex-planet Pluto to save the day.

It has been said that Sparks (who now boasts his own production company, so the “fun” will continue for years to come) has trouble writing men, but can certainly capture women. After Safe Haven, I can honestly only say he cannot write ANYONE. His latest effort is schmaltzy, predictable, clichéd to the point of absurdity, and has no chemistry whatsoever between his good looking leads. In fact, now that I think about it, Safe Haven actually is the perfect Valentine’s Day date movie — provided, of course, that you and your date avoid it at all costs. 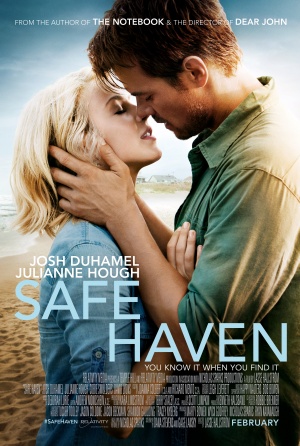