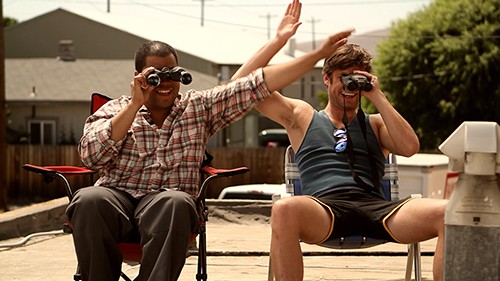 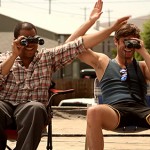 It isn’t likely one will recognize any members of the cast of Cement Suitcase, a film written and directed by J. Rick Castaneda (whose resume includes just a few short features, including “Math and Other Problems”). Yes, a person may have a fleeting bit of acknowledgement, but will most likely say, “Oh, he/she just looks like someone I’ve seen before.”

Such feelings, however, should not necessarily detract from the enjoyment of this picture, which tries hard to walk the thin line between silly comedy and heartbreaking drama. What ultimately undoes this production (besides the community college acting displayed by some of the cast) is that very indecision, though.

The plot reminds one of “The Secret Life of Walter Mitty” meets “Sideways” meets “Kangaroo Jack,” and features Franklin Roew (Dwayne Bartholomew, “Math and Other Problems”) as one of the top wine salesmen in the Yakima Valley, WA. Despite such success, he drives a clunker, is behind on most of his bills and is in danger of losing his late mother’s home to foreclosure.

Still, he manages to attract a beautiful girlfriend, Charlene (Kristina Guerrero, “The Bookie”), which is the first in a series of how REEL Life (the movies) can trump REAL Life. Another is that when Franklin advertises for a roommate to help with expenses, no one applies except a wacky Australian (why are all Australians wacky in the movies?), Jackford (Nathan Sapsford, “Key”) who appears one day out of the blue and on Franklin’s roof, to boot, goes through his personal belongs during their first interview and later pours soda on his X-Box and Nintendo systems. That would never fly in REAL Life.

Meanwhile, Franklin has discovered that Charlene is cheating on him with a golf pro named Brad Golob (Shawn Parsons, an uncredited appearance in “12 Years a Slave“) who just happens in the winery one day and invites Franklin to play a round of golf.

At this point, even I am not sure what is going on. Are Brad’s intentions pure? Does he know about Franklin and Charlene? Is he just a hapless dope trying to be nice? And does Cement Suitcase even have a point? While trying to piece everything together, there are some unrelated dreamlike sequences featuring Franklin standing on the rook of his car driving down the freeway, a strongman at a train station, a bunch of shopping carts piled atop one another, several unnecessary cartoon graphics scenes and Jackford teaching him how to dive into a moving vehicle and convince the driver to do what he says. All of this makes little sense. 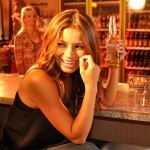 Even more nonsensical, though, is Brad inviting Franklin to dinner with him and Charlene; a meal which ends in embarrassment for everyone all around, but then again, what did they expect would happen? Anyway, after losing his job because of a drunken exhibition, Franklin decides to sell the house and car and then dive into a dairy truck he thinks Jackford is driving. It turns out not to be Jackford, but a jittery redneck with a shotgun (possibly the worst combination one could imagine) and the film, not really knowing what to do at that point, just ends.

I can give kudos to Castaneda for making a valiant effort in his feature debut (although he WAS responsible for some of the shortcomings in the script), as the sparse set design works with the slight story and the shots of small-town Washington State are convincing enough. Bartholomew is also the saddest of sad sacks and even though he looks as if he has channeled the spirit of former SNL cast member Kenan Thompson, he is the most convincing actor in this production. The others are just pretty faces and, in Sapsford’s case, just another eccentric Aussie character we’ve seen over and over again. Since Cement Suitcase is not likely to appear at the nearest cinemaplex, better search for it online somewhere, although the effort taken to find it may turn out not to be nearly worth the trouble. 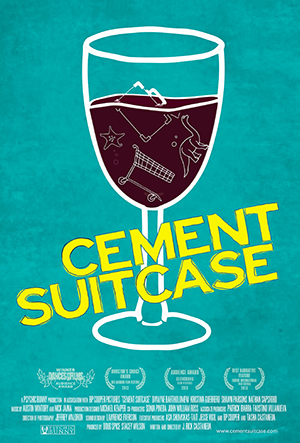