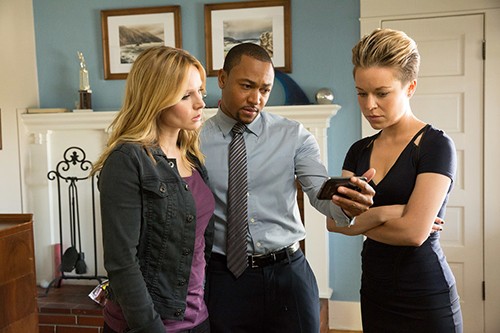 Time for a reunion!

If you were to travel back to the nondescript year of 2004 in your time machine (hopefully of the hot tub variety) and tune into one of those crappy upstart TV stations (the CW in this case) you’d find a little show about a girl detective who, while solving campy mysteries, also has to deal with high school trivialities. “Veronica Mars” was a relatively popular show but not quite popular enough to be kept on-air for more than a few seasons.

The fans of the show, however, are a vocal bunch and with their wallets they financed Veronica’s cinematic rebirth via a Kickstarter campaign. $5.5 million dollars is a lot of money to relive one’s youth and quite frankly it could have been better spent. Veronica Mars, the fruit bore of their tenacity, is about as exciting to watch as watching molasses stream down a slight decline.

Undoubtedly taking a heftier percentage of those millions than the rest of the cast is Kristen Bell (“Forgetting Sarah Marshall”) who easily slides back into the titular role that basically launched her acting career. And like her, this Veronica is older, supposedly wiser and basically just as cute. The story picks up with Veronica, now out of Neptune and with a Stanford law degree firmly in hand, interviewing with a prestigious New York law firm, guaranteeing to them her interesting past — which includes a sex tape — is in the past. It takes all of an additional five minutes more for her to go back on her words, however, as she is summoned back home to help her ex, Logan Echolls (Jason Dohring, star of many television series and movies), who has been charged with murdering his pop-singer girlfriend Bonnie DeVille/Carrie Bishop (Andrea Estella filling in for Leighton Meester).

Hold on though, it gets better. Smelling a perfect way to reintroduce characters from the TV show, original show writers Rob Thomas and Diane Ruggiero cleverly bookend in a 10-year high school reunion to coincide with Veronica’s trip back home. Best friends, Wallace Fennel (Percy Daggs III, “In the Hive”) and Cindy ‘Mac’ Mackenzie (Tina Majorino, “Napoleon Dynamite”), greet her and then basically slink off to the sidelines, while others like Gia Goodman (Krysten Ritter, “Killing Bono,”) Dick Casablancas (Ryan Hansen, “G.I. Joe: Retaliation,”) Luke Haldeman (Sam Huntington, “Superman Returns”) and Eli ‘Weevil’ Navarro (Francis Capra, “Rampart”) stick around to add intrigue and fun, albeit very little of both, to the mystery.

As to what dangers lie ahead for Ms. Mars, there are surprisingly few. Even though her clue gathering is about as discreet as a famished fat guy at an all-you-can-eat buffet and she is quickly on the radar of the people she is sleuthing as well as Neptune’s power-corrupted sheriff, Dan Lamb (Jerry O’Connell, “Piranha 3D”), no one seems to bat an eye. No one, that is, except for her dad (Enrico Colantoni, “Contagion”), although he has a litany of other reasons to insist she back off. 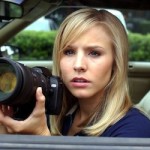 That’s because what she does and how she does it matters not, as everything falls into place following a strict paint-by-numbers formula, fearful perhaps, that if Veronica Mars were written with any level of intelligence, it may confuse longtime fans.

The lone bright spot to what feels like an overly long episode of a soap opera that everyone should be able to agree on is Kristen Bell brings the right amount of spunkiness and sympathy to her character. Sure the material is written specifically for her and tailored to her abilities but she owns it and she is quite convincing — possibly a side effect from Colantoni being one of the few in Veronica Mars with stronger acting chops — when interacting with her father during those “what are you doing with your life” talks we’ve all been privy to. It’s hardly a reason, unfortunately, to invest 107 minutes, especially for non-fans of the series. 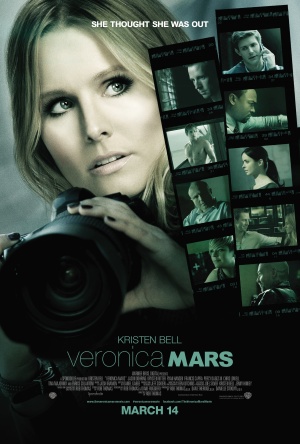