Throughout history, the phrase “Behind every great man, there is a great woman” never seems to lose its poignancy. And when such a remarkable male figure happens to be creative, the statement deserves to be shouted rather than whispered. This is where Tom Dolby’s The Artist’s Wife, starring Lena Olin and Bruce Dern, comes into play.

The film opens on an interview — one that showcases the loving relationship between celebrated (though fictional) artist Richard Smythson (Dern, “The Peanut Butter Falcon”) and his wife (for which the title references), Claire (Olin, The Reader”). In it, a very typical set-up is established, one in which an older man falls for the charms of a passionate younger woman. She’s his muse, his inspiration, his life. Yet when the magic of their on-camera warmth fades to black, Claire and Richard’s romance is anything but artistic splendor. Especially when Claire discovers that Richard has begun to succumb to the early stages of dementia.

There can be no denying that the world of film has showcased many similar stories to Claire and Richard’s. The dynamics of a sickly, yet powerful, figure being cared for by a compassionate, yet conflicted, individual is nothing new. But what sets Tom Dolby’s film from the others is the undefined lens for which he views Claire and Richard from — for they are ultimately two incredibly unlikable characters, who seem to be in love in ways we (as the audience) will never fully grasp. Perhaps such a magic trick could have been accomplished by seeing the earlier warmer moments within Richard and Claire’s relationship. These scenes could have acted as the receipts for audiences to realize why Claire would give up so much for Richard’s happiness. But for what is contained in the 94-minute runtime, it is hard to see how this romance even came to be.

Every other scene, however, there’s something new to discover to hold against these two. For Richard, it is his harsh words and radical views on life. Were these incidents created by his onset dementia, or rather, were they always there? And for Claire, her warm aura and decisions often read as creepy, desperate, and even offensive at times. Were these instances the product of her time with Richard or was this sort of behavior always bubbling under the surface? And how come no one has called the police in any of these instances? That’s a question that only the Tootsie Pop owl could answer.

Yet what keeps viewers feeling some level of interest towards Claire is the actress bringing her to life. Lena Olin is a talent that doesn’t receive anywhere near the amount of acclaim she deserves. For though she may be given scenes that could come across as unintentionally awkward in another actor’s hands, she portrays the dramatic shifts in Claire’s privileged life with believable grace. It’s just a shame that the overall script — co-written by Dolby, Nicole Brending, and Abdi Nazemian — hinders what otherwise could have been a memorable performance.

As for Dern, his take on Richard walks that theatrical tightrope of endearing fragility and cartoonish monstrosity. One scene will show Claire’s devotion towards him, while the next will make viewers question every single character’s motivations towards worshiping this supposed artistic hero. From speaking to his young students in the most offensive of fashions to treating family members in the most despicable of ways, its hard to find anything redeemable towards Richard’s struggles.

But perhaps that is the ultimate question that Tom Dolby is asking of his audience. For when you see a couple across the street, who are faced with the same struggles as Richard and Claire, what emotional side would you be on? Would you find yourself wanting to abandon Richard to a nursing home? Or would you find yourself relating to the love Claire has that makes her to sacrifice her own passions for Richard’s well being?

Overall, The Artist’s Wife is a test in sympathy. If you can withstand the too on-the-nose soundtrack, clumsy clichés, then you’ll likely discover a treasure from both Olin and Dern’s filmography. But if those elements (along with the sprinkles of unbalanced sequences — such as those with the way Richard handles his daughter and grandson) lead you to do any sort of head-shaking, than this drama — and its somewhat bizarre conclusion — will have you foaming in ways that no Starbucks drink could reproduce. 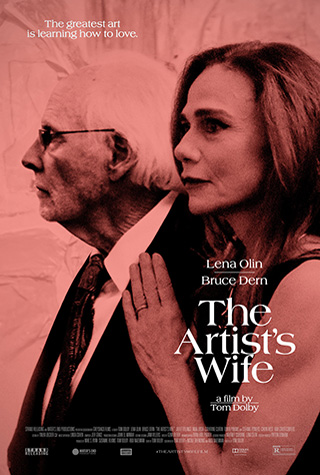