Every time something tragic involving a youth occurs — whether it be unhandled rage or mental breakdowns — it seems that the “prestigious” physicians and psychiatrists employed for the good ‘ol government have an answer. They usually disregard the obvious answer — prior mental or emotional issues — and blame the aggressor’s hobbies for his actions.

By harpooning the most common aspects of modern day youth: video games, music, movies, and of course, comic books, the general public is brainwashed to think that these are the seeds of evil that drive some teenagers and young adults to gun violence, drug-use, and masochism. In actuality, it’s the individual’s mental inefficiency or complete lack of common sense that’s to blame.

Some artists that are affected by this irrational public outrage quit the business due to social pressure. Others tone down on their material while compromising on their ideal works of art. Others just take the protest head on. Mark Miller is one of these unrelenting great minds. Considered one of the greatest contemporary graphic novel writers, Miller, has no doubt a large fan-base. I’m not a fan of comic books, but I’ve heard his name countless times, but this is the first time that I’ve heard so much public out-lash against him.

It all stems from his graphic novel, Kick-Ass, which was published two years ago by Marvel Comics. Just judging from the title, it isn’t hard to imagine this latest of Miller’s endeavors to be light on plot but heavy on bloody violence and looking at the cover of the second issue of the comic series which sports the line “Sickening Violence: Just the Way You Like it,” it seems like speculators were right.

But it’s unfair to judge on a book on its cover (or title) and after seeing Matthew Vaughn’s film adaptation which releases this weekend, I can honestly say that Kick-Ass is much better than I first expected and Vaughn’s big-screen version of the graphic novel features sharp writing, brilliant performances, and of course, indulgent action sequences and story-telling.

Kick-Ass wraps it’s self around realism. The heroes don’t use high tech radios — instead, they use iPhones. They don’t wear bulletproof, light-weight armor — no — they wear cheap spandex that they bought on the internet.

The protagonists include Kick-Ass, a socially awkward teenager who wonders why nobody becomes a “real-life superhero,” even though his friend, Todd (Evan Peters, “The Lazarus Effect”) tells him some words of wisdom that “real-life superheroes would get their ass kicked.” Aaron Taylor-Johnson (“Godzilla”) does a brilliant job portraying Dave Lizewski through his metamorphosis from irrelevant teenager to New York City’s famous costumed vigilante. The believable characterization makes Dave / Kick-Ass a very relatable character, even if he does use cheap batons to fight crime.

On the other side of the spectrum there is Mindy Macready (Chloë Grace Moretz, “Dark Shadows”) and Damon Macready (Nicolas Cage, “Ghost Rider”) whose superhero personas are Hit-Girl and Big Daddy. Unlike Kick-Ass, who is obviously an amateur at fighting against the city’s underworld, Hit-Girl and Big Daddy are hardened professionals. Though alike in looks, Big Daddy is almost the antithesis to Batman. Instead of fighting for personal vengeance by himself, Damon brings down his daughter alongside him. He trains the damaged Mindy to become a trained killer. Damon is the most selfish of all of the film’s characters (even more than Mark Strong’s character — Frank D’Amico — who is the film’s antagonist). The almost robotic performance by the increasingly unreliable Cage doesn’t help the character’s likability, however, the action scenes involving Big Daddy are easily some of the film’s best.

Mindy Macready is the most questionable of the characters. On one hand, Chloë Grace Moretz’s performance steals the show, but on the other hand, it’s easy to question Miller’s intentions for formulating such a character in the first place. Hit-Girl is sarcastic and brutish and it’s disturbing to see a protagonist as young as Mindy randomly stabbing hit-men and performing close-up executions.

Personally, I believe Hit-Girl is just one long over-complicated joke that is meant to anger the masses. She’s a caricature for what the public believes that comic books can do to young people. Neither Miller nor director Matthew Vaughn cares about their public opinion and actor Mark Strong, who has his own children, had to object to Vaughn’s decision to include even more violence including Hit-Girl, however, Strong’s wishes were granted and Vaughn luckily canned the idea.

The last of the film’s super-heroes is Red Mist, who is played by the usually likable Christopher Mintz-Plasse (“Role Models”). Red Mist, whose real name is Chris D’Amico, is the son of Frank, who is played excellently by Strong. Chris longs to be acknowledged by his father and thus creates his super-hero persona to capture Kick-Ass so that he can one day take Frank’s position as leader of the mob. Red Mist is sort of the Ozymandias of Kick Ass, but Plasse’s performance doesn’t hold up to the likes of Strong and Moretz and his portrayal of a potential villain for the inevitable sequel is incredibly whiny and annoying.

But Kick Ass is getting the most attention for its shock-value. The violence is amazingly stylish and the pacing never misses a beat. The entire movie is one-hundred and seventeen minutes, but for the first time in months, I can honestly say that I haven’t look at my watch throughout the entire viewing and once the climax was reached and the credits rolled, I thought to myself — “Wow, I can’t wait for the sequel.”

Audiences won’t be disappointed: Kick Ass is a surprisingly well-made film that warrants multiple viewings. Though it sounds cliché, this film is absolutely kick-ass. 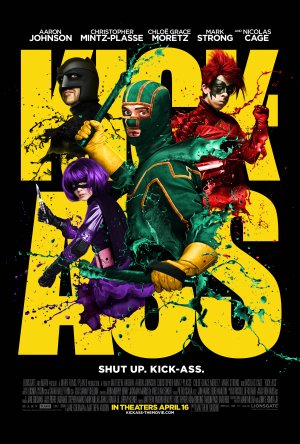