At the start, the title character of Lee Daniel’s Precious: Based on the Novel Push by Sapphire introduces herself to the audience: “My name is Clareece Precious Jones. I want to be on the cover of a magazine. I wish I had a light-skinned boyfriend with good hair. But first I want to be in one of those BET videos.”

Unfortunately for the beleaguered Precious, her hopes are destined to remain fantasies. The obese, illiterate African American teenager from Harlem is unlikely to grace a magazine cover or be hired to play a video vixen. There is nothing beautiful in her sad life, nothing that might encourage her to envision a better future. Yet grim reality can’t snuff out the flame of hope that burns weakly in her fragile heart.

Precious is about a young girl’s inspirational climb out of the mire of poverty and abuse and transformation from a battered soul into a capable young woman ready to embrace her responsibilities and the possibilities life has to offer. Unlike others who face similar issues, Precious breaks the pattern that threatens to trap her into perpetuating the cycle of abuse.

Director Daniels eschews sentimentality and melodrama in favor of taking a brutally frank approach, painting a realistic portrait of life in the ghetto for a teenager on the road to nowhere. Daniels explores the themes of sexual abuse, incest, domestic violence, and dysfunctional families found in Sapphire’s novel, Push, adapted for the screen by Geoffrey Fletcher. Precious might be regarded by some as a modern day “street” variation of Cinderella, but believe me, our heroine’s story is no fairytale.

Fifteen year-old Precious (Gabourey Sidibe) is pregnant with her second child (both pregnancies courtesy of her father) and failing in school. The concerned principal transfers Precious to an alternative school where she can earn her GED. Initially, she’s reluctant. Her abusive mother Mary (Mo’Nique) is even more so: “You’re a dummy don’t nobody want you don’t nobody need you. School ain’t gonna help you none. Take yo ass down to welfare.”

Preciouschallenges the concept of the traditional family unit. Our heroine discovers that one can find encouragement, love, and support in the unlikeliest of places and among people with no blood ties. The new “family” on whom she relies consists of a sympathetic teacher (Paula Patton), a social worker (Mariah Carey), a nurse (Lenny Kravitz), and her troubled classmates.

The movie has generated a lot of Oscar buzz. Aside from an anticipated nod for Best Picture, critics are predicting nominations for Sidibe and Mo’Nique. Sidibe’s unique face says as much about her predicament as her tortured words do: “Nobody loves me! . . . Love beat me down! Made me feel worthless!”. With genuine emotion and superb craft, she delivers a heart-breaking performance.

Comedienne Mo’Nique leaves behind her stand-up comedy routine to dive head first into her role as a maternal monster. She creates layers in her characterization of Mary by exposing the raw pain and fury that drives the woman to heap unspeakable abuse upon her daughter. I have my fingers crossed that Mo’Nique steals the Best Supporting Actress award for 2009.

The powerful and uplifting Precious emerges as one of the finest movies of the year. A word of caution, though. This film contains offensive language, violence, and disturbing sexual situations.

I've been a fanatical movie buff since I was a little girl, thanks to my parents who encouraged my brother and I to watch anything and everything we wanted, even the stuff deemed inappropriate for minors. I work, write, and reside in San Francisco the city where I was born and bred.

'Movie Review: Precious: Based on the Novel Push by Sapphire (2009)' have 3 comments 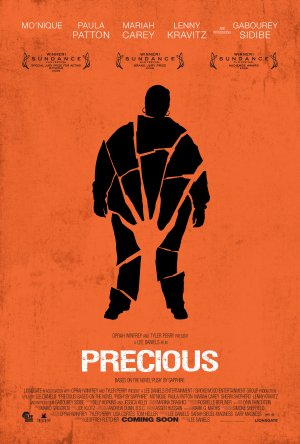 Precious: Based on the Novel Push by Sapphire (2009)