Can you spell low budget? I can. It’s spelled D-I-A-M-O-N-D D-O-G-S. For those that are having a problem understanding that, I spelled: Diamond Dogs. As everyone knows between screening the monstrous blockbusters all the time, I’ve got to give back to the community now and again. I do that by watching movies no one will ever watch. Consider this review two hours off of my sentence; 4,998 more to go.

The story revolves around an ancient Buddhist tapestry with extremely important Tanka (paintings that represent the images and stories of Buddha) on it. An extremely rich man Chambers (William Shriver) has a map that will lead him to it. The problem is it is located somewhere in the middle of Mongolia. Enter Xander Ronson (Dolph Lundgren). He’s a back-alley brute with green beret training. He’s also a guy heavily in debt, so he readily accepts the $100,000 paycheck to guide Chambers, his daughter Anika (Nan Yu) and the rest of his team to the treasure. But only if it were that easy. Zhukov (Raicho Vasilev) and his band of merry men want the tapestry too.

I purposely went into this viewing of Diamond Dogs with low expectations — let’s be realistic — it stars Dolph Lundgren. Not much has changed for Mr. Lundgren. He still can’t act (monotone delivery and a stone face). The one facet that has changed is he is skinny as hell now. I haven’t seen him since, shit I can’t recall the last movie I saw him in (maybe it was “Rocky IV”). Anyways, I remember him being buff and ripped. He now looks like an AIDS patient. He needs to put an extra 30 – 40 pounds back on.

As for the movie itself, I’m sure you can tell, it isn’t very good. If you ask me, I’d guess the writer (Léopold St-Pierre) wasn’t too interested in this screenplay. The plot is only half-baked — not nearly enough time was spent on the artifact retrieval. I’d say tops 15 minutes was spent on the actual discovery and capture of the artifact. Absolutely no build-up — one second they’re looking at the map, next they’re grabbing the chest (how no one else found this thing is beyond me). The majority of the focus was spent on some bizarre love triangle between Ronson, his ex-girl Sonia (NuoMing Huari) and Anika. Diamond Dogs didn’t need any heartfelt moments, it needed action. And that was the most disappointing aspect of all. The fight scenes were extremely tedious and boring to watch. The final battle between Zhukov and Ronson was pathetic at best.

I highly doubt Diamond Dogs will be released theatrically in the states. You can probably find it later this year in the bargain DVD bin at your local Wal-Mart. Even with a $2.99 price tag, I’d recommend skipping this feature. Instead, find yourself a good Jean-Claude Van Damme movie like “Lionheart” to rent. The acting is just as bad, but the action and fighting is 500-times better. 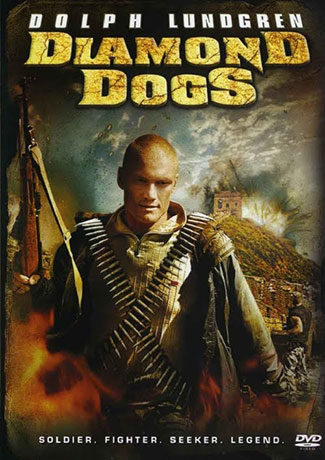