I’m sure I’ve said it before somewhere at some time — I may be the biggest fan of teen angst movies. Yeah, they’re not going to win any awards, but as I get older, I love reliving my youth through them. It’s a small pleasure. Plus, they usually have lots of naked girls running around in them. That’s a big pleasure.

Bickford Shmeckler’s Cool Ideas seemed to be just what I needed. A college nerd, Bickford Shmeckler (Patrick Fugit, “Wristcutters: A Love Story”) has himself a book of ideas. Every day, he writes thoughts in the book that would make the average persons head spin. So you can understand how upset he gets when a sorority girl, Sarah Witt (Olivia Wilde) “borrows” his book of deep ponderings. That unto itself is bad enough, but of course she gives the book to a friend, who gives to another person and another . . . until Bickford’s writings are being passed all around campus.

So, as he hunts down his prized possession he has the joy of being introduced to a few strange characters that have come into contact with the book. Matthew Lillard (“Without a Paddle”) is a crazy homeless guy who believes in inter-dimensional beings. After reading the book he thinks Bickford can lead them all. John Cho (“Harold & Kumar Go to White Castle”) leads an AD&D group that drops everything to spread the gospel of the book. It turns out everyone who reads the book either has a mental orgasm or feels enlightened by the thoughts on life, the universe and everything (shameless “The Hitchhiker’s Guide to the Galaxy” plug). Bickford has become a reluctant star.

That’s because he’s is an introverted goob. He’s one of those guys who make use of huge words that only impress complete idiots and he rambles on seemingly aimlessly when poised a simple question. In short, he’s a kid with absolutely no people skills. Casting Patrick Fugit in the lead role was an interesting choice. While his exterior is a bit clunky, I kind of expected someone named Bickford Shmeckler to look more like Gilbert from “Revenge of the Nerds.” Nothing particularly wrong with him in the role, it’s just a personal preference — I like my dorks looking like dorks not like emu semi-goths.

And while I applaud the fact that Bickford Shmeckler’s Cool Ideas doesn’t follow any of the set parameters of the typical college life movie, I can’t help but feel dismayed. First, and oh so painful, there’s no nudity. None. Casting hottie Olivia Wilde (she was the lesbo who broke Mischa Barton’s cherry in “The O.C.”) in the female lead without asking her to bare even the smallest amount of skin is a crime worse than dog-fighting (fuck you Michael Vick). Filming toga parties and luaus without heaps of reckless drinking is problematic too. There are a bunch of stoner scenes, but they’re not nearly as fun as watching guys and girls pound a fifth of whisky and puke all over themselves. Oh, how I miss the days of college!

There are a few endearing qualities about Bickford Shmeckler’s Cool Ideas that I suppose I shouldn’t overlook. It is a funny movie. I especially thought it was funny when the Dungeons and Dragons players thought Bickford was a nerd. Talk about irony! There was also the underlying message carried throughout the movie that even those atop the mountain need to reach out for help — everyone needs to clear something off of their conscious and there is always someone willing to listen (even if they’re someone unexpected).

I’d say give Bickford Shmeckler’s Cool Ideas a view if, and only if, you’d like to see a relatively new take on the tried and true teen movie formula. If you’re like me (read that as shallow), then skip and rent one of the other 100+ alcohol-fueled, naked girl obsessed college flicks. 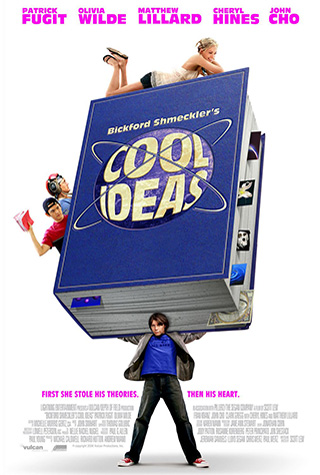