I’m college-aged, enjoy bad movies, and have a foul-mouth, therefore, I am the perfect candidate for Nima Nourizadeh’s Project X. At the same time, I’m potty-trained, and that makes me too sophisticated for it. Loosely based on an Australian house party where a teenager posted his address on MySpace, attracting over 500 people and causing $20,000 in damages, this movie is the latest abuser of the found footage craze. What remains lost, however, is a purpose.

Produced by Todd Phillips, this comedy revolves around three unnoticed high school students who, to get popular (and hopefully laid), host a blowout. When his parents leave Pasadena for their anniversary, Thomas (Thomas Mann), a meek senior, his crude friend, Costa (played by Oliver Cooper, who’s accurately described by one of the characters as “that dick in a sweater-vest”), and JB (Jonathan Daniel Brown), the fat third wheel, stockpile on booze and drugs, inviting the school’s elite for a night of recklessness. To their surprise and adoration, the breasts come in abundance also. But when dealing with drunken teens, the situation can quickly get out of hand. With commotion spreading and thousands of rowdy kids flooding the neighborhood — leaving terror and destruction in their wake — the threat of leaving his dad’s office unscathed becomes an afterthought.

The paper thin plot is an afterthought too. While the party’s supposed to serve as a jumping off point for the Hughes-inspired theme of spitballs-to-prom kings, it instead plays out like a series of WorldStarHipHop worthy twerking videos with dramatic close-ups of bugged out teens. Nourizadeh, showing his lack of directorial prowess, obviously focused all of his energy into finding and exploiting a slew of attractive models rather than expanding on any of his one-dimensional protagonists. Writing in a violent midget (Martin Klebba) is the closest scribes Matt Drake and Michael Bacall get to inspired.

To boot, nobody has anything interesting to say. Movies like “The Hangover” and “Superbad,” which dealt with similar subject matter, had protagonists who, at the very least, used clever innuendos, but the one and only thing the asshole characters in Project X talk about is “fucking more bitches.” The leads are completely unlikable and whilst Brown borrows Jonah Hill’s shtick (minus the timing and charisma), Cooper sticks to blindly spewing cusses and insults. As a last ditch effort to humanize at least one of the trio, the filmmakers try stirring in a romance with Thomas and a cute blonde named Kirby (Kirby Bliss Blanton), but ultimately it makes everyone seem even more obnoxious.

The soundtrack, although as shallow as the premise, is the best part of the movie. It’s full of indulgent, synth-heavy remixes, hip-hop bangers, and general ignorance, though there’s also a little variety — sprinkled in between the chaos some R. Kelly and Metallica can be found.

So, unless you’re an oblivious 9th grader who yearns to, one day, join the big leagues of high school and become one of the “it” crowd, Project X is not for you. Anyone who has graduated or half a brain can tell you keeping up with the chore of being popular is a worthless cause — in the end, all that follows are years of jadedness. So dream on. 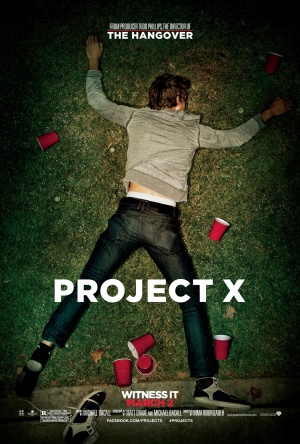