Orange is the new green in Chris Renaud and Kyle Balda’s eco-friendly, family flick The Lorax. Based on a Dr. Seuss book of the same name, it’s the latest offering from Illumination Entertainment — the studio behind 2010’s “Despicable Me.” Released on what would been the author’s 108th birthday, the animated feature explores the topic of deforestation and pollution by introducing a world where the Radiohead title “Fake Plastic Trees” is a reality.

In Thneedville, the bushes are inflatable, the water’s chemically-induced, and greedy businessmen like Mr. O’Hare (voiced by Rob Riggle) make a killing selling bottled air. The city is isolated from the outside world, which has been contaminated and stands a remnant of a once idyllic wonderland. Formerly ruled by the Lorax (voiced by Danny DeVito), a stumpy creature who protected the greenery, it’s now abandoned except by The Once-ler (voiced by Ed Helms) — a once businessman and revolutionary inventor responsible for the depletion of the forest. To impress the girl of his dreams, Audrey (voiced by Taylor Swift), an idealistic 12 year-old named Ted (voiced by Zac Efron), sets out to speak to The Once-ler and bring back the last tree seed, which he hopes can be used to remind his town of the importance of nature.

The Lorax, written for the screen by Ken Daurio and Cinco Paul, manages to retain Seuss’ eco-cautionary moral whilst being widely entertaining. Part of its allure is that it describes adult messages in ways that young children can appreciate. And surprisingly enough, in its portrayal of a plastic world, the filmmakers paint a far more haunting image of global pollution than any scientific study could.

But the script has a couple kinks. When it alternates between Ted’s journeys to and from town (which are tested by O’Hare’s involvement) and The Once-ler’s retellings, the transitions tend to be cheesy and expected. It’s also quite a bit preachy. Towards the end, an entire dialogue between Audrey and the townsfolk is used to describe photosynthesis. It’s not that it’s an undeserved topic but the way the scribes handle it seems like they were quoting directly from a textbook.

Still, a distinct comic presence helps move the movie along. With talents like Betty White, who plays Ted’s Grammy Norma, Riggle, Helms, and DeVito attached, it’s no surprise Renaud and Balda have fun with their frenetic characters. Jenny Slate, who voices the boy’s neurotic mother, is another standout. The performers’ energy works hand in hand with the idiosyncratic visuals, which adhere to the Seuss trademark. Yet when their liveliness takes a breather during the movie’s quieter scenes, a dry spell takes over. It’s unfortunate too that Efron and Swift, despite not being as intrusive as they could’ve been, aren’t as satisfying.

Some critics have blasted The Lorax, calling it an elaborate marketing scheme. With the characters being used in advertisements for Mazda and disposable diapers, they’ve claimed that modern culture has washed out the book’s spirit. Meanwhile, conservatives, like Lou Dobbs, have said it’s “insidious nonsense from Hollywood” and is liberal America’s attempt to “once again indoctrinate our children.” My response? Movie making is an expensive business and investors were needed to bring the book to a new generation. So unless you’re totally against nature preservation or commercialism, ignore the naysayers, The Lorax still proves to be beautiful, thoughtful, and sincere family entertainment. 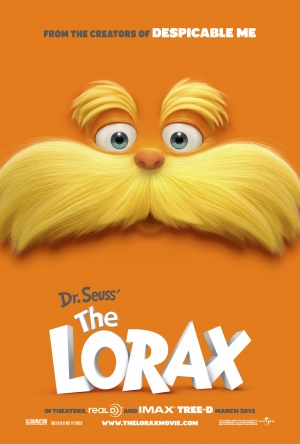