After ten years in L.A., Becky Westlake (Brigid Brannagh, “The Nurse”), a successful artist and potter, has decided to venture out of her comfort zone in search of the perfect place to start over. Having successfully managed a gallery and making a name for herself, she’s decided she wants to find a home far away from the chaos and bustle of California, and settles on Moldova, “an affordable gem nestled in the heart of Eastern Europe where the old meets new in surprising ways.” How do we know all this about this red-haired beauty? Because she’s being shadowed by “Home Hunters Global with Kate Banks,” a TV show that follows prospective buyers who want a international new start. The episode also introduces us to Vladimir Filat (Dimitri Diatchenko, “Chernobyl Diaries”), the local real estate broker whose favorite saying is, “Only broker in Moldova — best broker in Moldova!” Becky tells him that she’s fallen in love with Moldova’s sense of history and Vladimir brings her (and the crew) to the small rustic village of Pavolvka, and a classic fixer-upper deep in the woods. Once Becky tells Vladimir and the crew that she’ll take the house, the episode pauses, with a voiceover that tells us we’ll find out more about the renovations after the break.

They’re Watching formally begins in a van with three crew members who are on their way back to Pavolvka to check in on Becky and her six-month progress on her new home. Alex Torini (Kris Lemche, “In Time”) drives, and provides his partner Greg Abernathy (David Alpay, “Quantico” TV series) with commentary about the local scenery, complete with frat-house humor about Greg’s mom. In the back seat is Sarah Ellroy (Mia Faith), who is the boss’s niece and has just recently been added to the team. She is the very definition of wide-eyed newbie wonder, and Alex and Greg do their very best to teach her as much as they can before she meets host Kate Banks (Carrie Genzel, “Jennifer’s Body”) who completely lives up to her reputation as an aggressive and hard-to-deal with pseudo-celebrity.

Sent out to film some B-roll for the episode, Greg, Alex, and Sarah happen upon a church service, and they sneak their cameras in for some local color. Unfortunately, they’re caught, and the villagers become very angry. Even though the situation is diffused by a constable, the scene is set, and the crew is followed at every turn by Moldovians who are very displeased with their presence. While they start off by following the crew on their adventures around town, it escalates to a woman accosting Sarah outside her hotel room and blessing her before yelling at her to go home, go home. Once the crew returns to Becky’s beautifully-renovated home, however, the tension shifts, and is replaced by curiosity about the history of Becky’s home, and intrigue about the village’s troubling condemnation of a single woman as a witch. Crunched for time, the crew works to complete the episode while simultaneously trying to mend fences with the villagers who always seem to be lurking about, and gradually the crew realizes that they might have a harder time leaving Moldova than they first expected.

Written and directed by Micah Wright and Jay Lender, They’re Watching is a highly entertaining found-footage slow burner that is funny, tense, and intriguing, all at the same time. While the themes of otherness and witchcraft are certainly nothing new to the horror genre, the film still feels fresh and interesting. Kris Lemche, David Alpay, and Mia Faith are relatable characters and they’re played with a laidback ease that makes their interactions very believable. They’re bold and arrogant, but at the same time, respectful and attentive to detail, which makes for an interesting combination of personalities. Their sneakiness in filming the church service puts them right in their place when they’re caught, and they’re properly embarrassed and apologetic, rather than rude and dismissive of the angry villagers. When things start getting dangerous in the woods, they respond appropriately, without coming off as shrill or silly. Carrie Genzel and Brigid Brannagh are equally believable, as a diva TV show host who hates being on camera and a demure, sweet artist in a strange land, respectively. As a group they come together very realistically, and you truly do care for their welfare, unlike in many horror movies when characters are expendable pieces of meat.

Wright and Lender have also done a great job in utilizing the handheld camera in a way that keeps the viewer tense and attentive in all the right places at all the right times. While the found-footage thing (especially the night vision thing) has certainly been overdone, They’re Watching doesn’t feel old, and most of that is due to the characters themselves. Scenes with night vision shots are still successfully suspenseful, and though you know something is coming, you’re still uneasy.

As with many horror films, though, when the slow burn finally does turn into a full bonfire, it’s the point when, unfortunately, the movie loses its edge. Any realism and believability built up goes out the window with the finale. Here, the ending of the film is silly and clichéd, and there are more laughs than I think were intended. While I can certainly suspend disbelief with the best of them, this action-packed finale (which is clearly where most of the effects budget went) was mostly ridiculous, and where They’re Watching lost me. It’s really too bad Wright and Lender couldn’t keep their momentum going to find a less absurd resolution to a film that really was fun and interesting for most of the 95 minute runtime.

I’ve learned, however, to not solely judge a horror movie by its ending, since I’ve been disappointed time and time again by terrible, tacked-on endings or by cheesy wrap-it-up quick resolutions (to some extent most recently with “10 Cloverfield Lane”). Hopefully, you can do the same, because They’re Watching is worth your time . . . or at least 85 minutes of it. 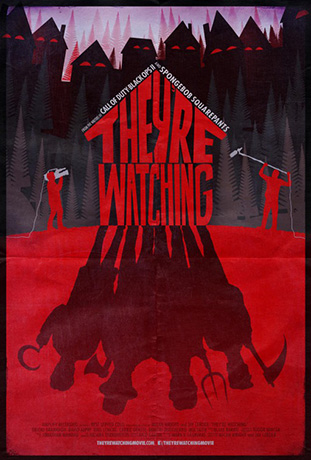