Both the original “The Houses October Built” and its sequel, The Houses October Built 2, open with quotes about the dark, primal volatility of human nature. The first cites Walter Jon Williams’ well known “I’m not afraid of werewolves or vampires or haunted hotels, I’m afraid of what real human beings do to other real human beings,” and the second, Marilyn Manson’s “Times have not become more violent. They have just become more televised.”

In the first installment of the now two-part “The Houses October Built” franchise, Williams’ quote goes on to become a thesis. The plot follows five friends, including Bobby (Bobby Roe), Zack (Zack Andrews), and Jeff (Jeff Larson), the first of whom directed and all three of whom wrote the films, along with goofball Mikey (Mikey Roe) and not-quite-Final-Girl but pointedly only girl Brandy (Brandy Schaefer). Together, but ostensibly at Zack’s behest, the group has decided to drive an RV through the American South on a hunt for the most extreme haunts October has to offer. Even though the film doesn’t necessarily follow a mockumentary format throughout, there are an abundance of clips of real news footage and actual interviews the cast carried out with people they encountered while filming, which are quite educational and frightening. Through these clips, before we see the five friends even enter their first haunted barn, viewers learn all about the lack of regulation within the haunt industry or background checks of scare actors, instances of sexual assaults or sex offenders working in haunts, scare actors and guests tragically and accidentally being injured and killed. One haunt owner, becoming slightly uncomfortable the more he speaks, says how unsurprised he would be if something went awry, given the kind of people drawn to and employed by this business.

When it came out in 2014, “The Houses October Built” was lauded for having breathed new life into an old narrative technique, even though plot holes and questions surrounding the narrative structure and editing of the film abound. What made it easy to overlook and forgive these plot holes, though, even as a film described by Bobby Roe himself in interviews as being very much grounded in the real world begins to take on more and more supernatural characteristics, is that even as it goes off the rails — and perhaps even more so, then — each twist and change still services its thesis.

Then, there’s The Houses October Built 2. When it is revealed that the horrifying end of the first film was recorded and disseminated online, at first it makes sense for its sequel to have begun with Manson’s words. The violence experienced by the friends (Brandy in particular) is difficult to watch but, it seems, the assertion the filmmakers are trying to put forward is that people do those kinds of terrible things to other people whether cameras are rolling or not and that, as long as they are, other people will want to watch them too.

Brandy’s torture, we learn at the beginning of the second film, while it did not kill her or her friends, as the first film seems to imply, did go on to become a viral video with a quite literally obscene amount of views on YouTube (the fact that, a year later, the video exists on that platform without any indication that any search for its creators or punitive efforts against them of any kind ever occurred is annoying in the same way the video at the beginning of “Unfriended” does is definitely annoying, but absolutely not its biggest problem). Because of this the friends are not only famous, but want to get back in the RV and attempt the same trip all over again, only this time as scare celebrities being paid to make appearances and experience haunts.

Naturally, Brandy has no interest whatsoever in the trip. Very clearly suffering long lasting effects of her trauma, she has dyed her hair, is noticeably more reserved, and doesn’t even humor the guys when they first come to her house to invite her along. Thing is, the venues and organizations that want to pay the friends to come by will sometimes only pay or even accept their attendance as long as Brandy is involved. Nobody cares about four guys, different characters say, repeatedly. The main event is, and must be, Brandy as “Coffin Girl.”

One of my favorite aspects of the first film was its adherence to both horror and general movie rules. In the words of Bradley Whitford’s character in 2012’s “Cabin in the Woods,” for example, if the main characters in a scary movie do not in some way transgress, then they cannot be punished. Early on in the original Mikey and others scale a roof at a haunt in order to rile up the crowd and a get a good shot. A masked clown is infuriated by this, confronts them, and only after that do the real scares begin. It’s almost as if the troupe’s fun and campy approach to being frightened in general, juxtaposed with their own inclusion of statistics about both scare actors and those who come to see them actually getting hurt, is a sign of necessarily punishable disrespect. Both we the viewers and they the filmers should not be afraid of werewolf masks or vampire fangs or haunted Texas barns, rather, we should be afraid of being scared by someone only play acting badly enough to accidentally fatally wound them or ourselves. We should be afraid of someone who truly does want to hurt people getting a job at a haunt. We should be afraid of what people really choose to do to each other, and ruminating on what it means when others want to film those things, or watch.

Unfortunately, as much as many parts of both movies may lead one to believe that is what we’re meant to glean from it, an abundance of repetition of elements viewers of the first film expect to be past in the second, self indulgent shots of the filmmakers with fans, and an extraordinarily messy ending tear this all apart. For example, in addition to the Manson quote up top, The Houses October Built 2 includes an interview with Margee Kerr, a sociologist who tells Brandy she began studying fear and “voluntary engagement with negative high arousal stimuli” as a way to “figure out how . . . we can engage with scary things in a way that will make us feel good and will even help us grow.” Brandy is shown to speak to this woman extensively about her experience, fears, and, in light of them, feelings toward her insensitively pushy friends, but in the end still goes along with them, with no real retribution ultimately coming their way at all.

The way that Brandy is forced, both by her both passive and overtly aggressive, peer pressurey, gaslighting friends and by scores of violent masked strangers over and over again back into situations she clearly wanted no part in in the first place, does not help her grow. The second film focuses far more on her specific experience than any of the others’ but the more one pays attention to it, the less sense it makes. She mentions in the first film that she hasn’t been to a haunted house since she was eight or nine years old, and it is obvious by the second that, after the ending of the first (which takes place over a mere six days, much of which are spent driving or being attacked in the RV at night), she has not gone to one again. Yet, when talking to Dr. Kerr, before going to any haunts in the second film, Brandy says that she’s attended fifty of them.

When I mentioned earlier that while Brandy is the final girl, she is not a “Final Girl,” this is what I meant: Carol J. Clover coined the term “Final Girl” in her book Men, Women, and Chain Saws: Gender in the Modern Horror Film in 1992, and is exemplified by women characters like Sydney Prescott in the “Scream” franchise. Not only are Final Girls, as their name implies, the last of a given monster’s victims left alive, but they are also the protagonists, the ones the audience is expected to root for and feel aligned with, the ones with whom we share satisfying, bloody victory when they break away from their original role, achieve new heights of independence, and brutally dispense with their story’s final boss.

To avoid spoiling the ending of The Houses October Built 2, Brandy almost has a moment entirely of her own, a moment of strength and independence and revenge. Almost. Unfortunately, that moment comes both because and in the middle of a series of twists that, while initially fascinating and satisfying to watch, upon second glance not only contradict each other, but undermine the entire premise of both films up until the moment that they are introduced.

That being said, as with the first one, The Houses October Built 2 has great, realistic dialogue, a group of people who truly care about each other, and a menagerie of fun and frightening clips from some truly awe inspiring haunts, even including, this time around, hilarious and exciting footage from an Escape the Room Adventure. The creepy porcelain doll masked character remains my favorite as far as creature design goes, and the movie’s manipulation of dark and silence kept me on the edge of my seat for most of it, although the farther I leaned in toward them, the less impact they made. 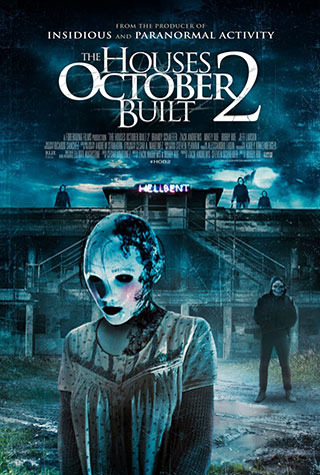