One’s enjoyment (or better yet, interest) in Legend, as written and directed by Brian Helgeland (an Academy Award winner for “L.A. Confidential” and a Razzie winner for “The Postman”), will most likely hinge on one’s ability to understand the deep Cockney accent everyone speaks here (even a universal translator would not help with much of this dialogue), as well as their ability to stand Tom Hardy (“The Revenant”) in a dual role, the likes of which have not been seen since “The Patty Duke Show.”

And while some critics have written that this is an amazing performance, this scribbler can only say that Mr. Hardy is just twice as bad as he was in movies like “Dot the I” and “This Means War.”

Also, viewers who don’t appreciate things like plot, pacing, competent direction and a coherent story may like Legend, as well. For the rest of us, however, this re-telling of the story of the Kray brothers — psychotic twins who ruled London’s underworld for a few years in the mid-1960’s — was done better by Peter Medak in “The Krays” and more substantial mob movies such as “Goodfellas,” “Casino” and “Mean Streets,” among others which this gloriously steals from.

Hardy/Hardy plays Reggie, the intelligent sibling (which is like saying that Jerry Lewis is more intelligent than Moe Howard of the Three Stooges), and Ronnie, his deeply-disturbed twin (that’s a considerable understatement, friends), small-time thugs who bully their way against equally minor gangs through brute force, fear and intimidation until they reach the top — or bottom, in this case — before finally being brought to justice.

Of course, various supporting characters, including Emily Browning (“Pompeii”), Christopher Eccleston (“Thor: The Dark World”) and Chazz Palminteri (“Once Upon a Time in Queens”), come to various ends, while others appear onscreen only to be slapped, beaten or shot, stabbed or generally dispatched as an illustration of Helgeland’s use of semi-graphic violence for the sake of well, semi-graphic violence.

Yes, the Krays were vicious an unrepentant criminals who used whatever weapons or advantages they had at their disposal, even managing to physically intimidate the police, the military members of Parliament and even Prime Minister Harold Wilson (if one can believe the narrative).

It’s also revealed that while Reggie finds love with ill-fated Frances Shea (Browning), Ronnie “likes boys” (the scriptwriter brings this point up, not me). Hardy seems to have fun, though, with Ronnie, who is also borderline schizophrenic and seems to wallow in the character’s mental illness, which, in this film’s case, means doing pretty much anything he wants.

He threatens, clubs, maims and kills at will, even belting several characters with liquor bottles (like Joe Pesci in “Goodfellas,” only not as funny). There is even an unintentionally hilarious scene where Tom Hardy gets to beat himself up with fight choreography designed by a second grade girl.

We are introduced to the demented duo as they were on the rise in the early ’60s, but that’s the only backstory the audience is given. Never mind that The Kray twins were boxers who grew up receiving and handing out beatings on a regular basis. Or that they were called up to serve with the Royal Fusiliers in 1952, but walked out after punching the commanding corporal in the face. Or that they were among the last prisoners held at the Tower of London before being transferred to Shepton Mallet military prison in Somerset for a month to await their court-martial. This, I think, would have made a valuable exposition and possibly explained some of the murky motivation the writer/director provides.

Another disappointing aspect of this film is the incidental music and background scores. Despite being in the heart of London, where the feared — and celebrated — brothers ran what was referred to as a “swinging nightclub,” not one Beatles or Rolling Stones tune can be heard on the soundtrack. Instead, we get tame instrumentals such as “Green Onions,” “Forever” (by the Little Dippers), “Sleepwalk,” “Theme From ‘A Summer Place’” and “Soulful Strut” (which was not released until 1969, when the brothers were already serving time for two murders). Don’t get me wrong, these songs are fine in their way, but not one classic hit by the Fab Four, the Kinks, Stones, Donovan or any other popular British artist of the era?

Still, like the recent “Black Mass,” Legend is a decent enough endeavor that, with a little more research and backstory, could have been a much finer and compelling gangster effort. 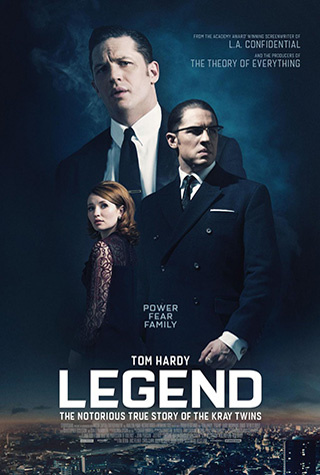