“And it feels like it’s so long till morning” — Kate Rusby, “Until Morning”

While many holocaust survivors openly express rage and uncontrolled bitterness towards their persecutors, other survivors display only an emotional deadness and a pervasive feeling of being alone and scared. In the movie “Fateless,” Gyuri, a young man sent to Buchenwald, moves from a childlike innocence to world-weariness in the span of one year. When he comes home, he feels more alone than he did at the camp and even expresses a sort of homesickness for the camaraderie he felt. As a disfigured Holocaust survivor in Christian Petzold’s “Phoenix,” Nina Hoss’ shattered look, repressed emotions, and shaky voice feel so natural that her gradual awakening to life epitomizes a Phoenix rising from the ashes.

Hungary’s entry for Best International Feature Film at the 2019 Academy Awards, Barnabás Tóth’s (“Camembert Rose”) Those Who Remained (Akik maradtak) asks us to rethink our idea of what liberation meant to those just released from the camps. Based on the 2004 novel of the same name by Zsuzsa F. Varkonyi and set in Budapest between 1948 and 1953, the suffering of the Holocaust years are deeply etched on the face of Doctor Aládar (Aldo) Körner (Károly Hajduk, “One Day”), a slender, gaunt man of about forty who is going through the motions of his Ob-Gyn practice at a Budapest hospital, but the look in his eyes cannot hide the trauma of his wife’s death and that of his two young boys.

Coming from the Israelite Community Orphanage, Klára (Abigél Szõke, “X – The eXploited”), a mature-looking 16-year-old girl, sees Dr. Körner, for a gynecological exam to find out why her puberty has come so late. At first, angry, fearful, and wound into a tight knot, when she reaches out and suddenly embraces the doctor, it is clear that she is seeking more than an exam but a respite from her desperate loneliness. Outspoken in her disdain for her classmates at school and her great-aunt Olgi (Mari Nagy, “Budapest Noir”) with whom she lives, Klára only begins to reveal her repressed humanity when Aldo responds to her like a fellow human being in pain, not a wounded animal.

Bringing the film to life with her tremendously affecting performance, Szõke refuses to return to Olgi even though she loves her and wants her to be happy. Instead, she moves in with Aldo who acts as a foster father, sharing custody with her aunt. He makes the rules, however, and is strict about physical contact, especially when she crawls into bed with him at night. Gradually, both open up though to each other. They talk about God, her parents, the sister she feels guilty about not being able to save from death, and, in a tender scene, he shares with her his photo album from before the war.

Though Aldo strictly adheres to the rules of propriety, their developing relationship raises some eyebrows, and the interest of Soviet operatives. Amidst talk of a Soviet crackdown on personal freedoms, Aldo and Klára do their best to be discreet, but it does not prevent others from gossiping. In one instance, after being seen in a park laying her head on Aldo’s lap, Klára is defiant when interrogated by a Communist official. Similarly, Pista (Andor Lukáts, “The Whiskey Bandit”), Aldo’s colleague at work, says that people have disappeared during the night and tells him that he has joined the Communist Party and has been asked to inform on him.

Those Who Remained is an intimate look at two damaged souls who have been bruised and shaken by life but are now ready to begin the reconstruction of their life, a process which will, in Percy Bysshe Shelley’s phrase “lift the veil from the hidden beauty of the world.” Knowing that any expression of the love they feel for each other will push the boundaries of what is considered acceptable, both realize that their protestations of innocence will not be enough to keep them safe, and that they must now reach out to others, bringing solace and joy in a world in dire need of both.

Those Who Remained screened at the 2019 Vancouver International Film Festival.

'Movie Review: Those Who Remained (2019)' has no comments 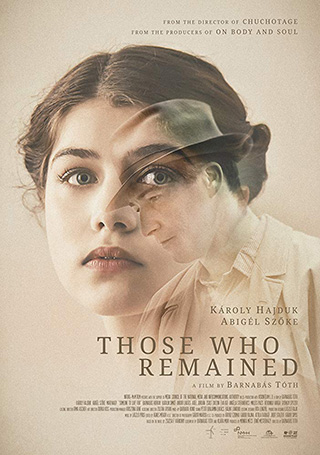