Tower Heist enjoys a coincidence of sorts in its choice of opening weekend. The Occupy Wall Street protest is alive and well not too far from where this film is set and hundreds of other Occupy protests are simultaneously happening around the world. Tapping into a particular segment of that angst, Tower Heist is about the blue collar vs. the mega rich; the staff (99%) vs. the penthouse owner (1%).

Arthur Shaw (Alan Alda) is a Bernard Madoff archetype who is put under penthouse arrest by the FBI for running a Ponzi scheme and defrauding his investors. His smallest investment account happens to be the pension funds of the staff that run the vast and luxurious tower he lives on the top floor of. Josh Kovacs (Ben Stiller) plays the tower’s manager and trusted staff leader. Stiller tries his best to pull off blue collar and everyman characteristics here even though he was paid $15 million to try and do that. It was Josh who convinced the rest of the staff to ensure their pensions to Arthur Shaw so he feels responsible when everything goes bust.

Josh is not going to go down without a fight though. He is in shock that a man as rich as Arthur would swindle the meager pensions of the very employees who cook his food, take out his trash, and open his doors. The film abruptly transforms Arthur from a nice and congenial billionaire into a miserly and insulting billionaire overnight. During his house arrest, he relishes reminding the staff of their lowly station in life and just how replaceable they are as part of the service industry. Whether or not a man in Arthur’s position would alter his behavior like that in reality is unclear — the script requires it of him here to provide the requisite motivation for the upcoming heist.

Casing the hotel, Josh picks up a motley crew of robbers who have no business robbing a piggy bank let alone a high-tech penthouse. There is Josh’s brother and hotel concierge Charlie (Casey Affleck), Mr. Fitzhugh (Matthew Broderick), a former tower resident and now bankrupt banker, Enrique Dev’Reaux (Michael Pena), the brand new elevator operator, and finally there is criminal and parolee Slide (Eddie Murphy). Josh knew Slide as a child; however, it takes awhile for Slide to remember Josh and when he does, he goes off on a not too funny rant on seizures.

Now that the team is in place, it is very lucky the film chose to open with a sort of “Day in the Life” of operating a luxury residence. Josh performs his morning checks of the staff and conveniently runs into an assortment of supporting characters each with their own specific quirk or skill which may or may not come into play during the heist at an integral moment. There are Miss Iovenko (Nina Arianda) who Josh reminds not to study for the Bar Exam during work hours; Odessa the maid (Gabourey Sidibe) whose skill will be revealed during the film; and there is Lester the doorman (Stephen McKinley Henderson) who is the tower’s longest serving staff member.

Tower Heist has quite a few similarities to “Ocean’s Eleven” so it wasn’t surprising to see it was co-written by Ted Griffin. Like it, this too has a very large and recognizable cast. And like it, I frequently noticed the actor instead of the character — an occurrence a director never wants to happen during a movie. Does anyone actually remember Brad Pitt’s or George Clooney’s characters? I only remember Brad Pitt, the sidekick and George Clooney, the ring leader. The caper itself is extremely elaborate and requires precise timing and coincidences.

There are not too many hearty laughs here although it all works in spite of the lack of slapstick comedy the audience expects (thanks to the relentless previews). The only person who routinely cracks jokes and amusingly remarks about how inept everyone else can be is Slide. Eddie Murphy, thankfully, has decided to revisit the realms of his better roles from “Trading Places” and “Beverly Hills Cop” and shelve the utter garbage he routinely chooses to be a part of lately (“Norbit,” “Meet Dave“). The set up scenes before the heist are the most effective, especially the back and forth banter between Stiller and Alda. They represent their respective economic worlds and do not want to back down from one another for fear of letting down more than themselves, but ideas and principles which embody their positions in life.

Even though Tower Heist follows all of the standard comedic heist film rules to cleanly fit inside of the genre, it succeeds due to the funny sneak peak into the every day, behind the scenes look at staff life in the tower and some amusing bits during the inventive heist. It doesn’t, however, quite meet the gold standard set by Soderbergh’s Ocean’s franchise. 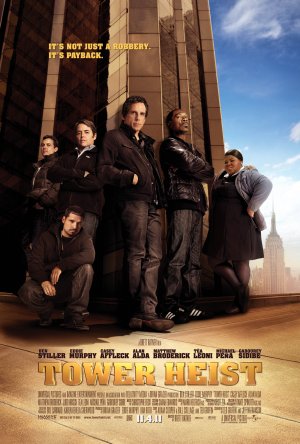