Robert Redford (“Our Souls at Night”) is an American icon and, in David Lowery’s (“A Ghost Story”) The Old Man and the Gun, has ostensibly made his final curtain call as an actor. Adapted by Lowery from a 2003 article in the New Yorker about Forrest Tucker by David Grann (“The Lost City of Z”), the movie is characterized as being “mostly true.” Though it takes liberties with the real story, it is an entertaining crowd pleaser that gives a strong cinematic sendoff to Redford who just seems to be really enjoying himself. In giving life to a smiling career criminal who stole over four million dollars during his “career” as a gentleman bank robber, he has turned Forrest Tucker into a legend to be spoken of in the same breath as outlaws Jesse James, Doc Holliday, and Billy the Kid.

First jailed as a teenager, Tucker, an escape artist as well as a thief, escaped from prison according to his own account, “18 times successfully and 12 times unsuccessfully,” a fact that may be fancy, but seems plausible in Redford’s confident portrayal. The film begins with an introductory course on Tucker’s modus operandi which he repeats in the course of multiple holdups throughout the Midwest. The polite old codger moseys up to a bank teller almost as if he is ready to ask her out on a date. Quietly displaying his gun (which he claims he has never used), he softly requests that she hand over all of the bank’s money.

The teller, originally scared, becomes fodder for Tucker’s charms who compliments her on the good job she is doing (presumably in efficiently collecting the money for him). Fleeing from the scene, he avoids the chasing police cars by stopping to help Jewel (Sissy Spacek, “The Help”) a woman about his age whose car has broken down on the side of the road. Though he knows nothing about cars, it is a convenient place where Tucker can hide while the bumbling police cars sail by. Offering Jewel a ride, they hit it off in some of the best scenes of the film. Stopping together at a diner, Tucker learns that Jewel is a widow who lives by herself on a spacious ranch. When asked what he does for a living, he says that he is in sales and gives her a false name.

Even though she can see through his deceptions, she is powerless to avoid falling in love with him. When she does find out the truth, she still loves him unconditionally. For Tucker, however, she will always come in second to his first love, relieving banks of their cash on hand. Of course, being a shipping heiress in Miami who became Tucker’s third wife, the real Jewel did not care much about the bank’s piddly sums. The Old Man and the Gun is also the story of police officer John Hunt (Casey Affleck, “Manchester by the Sea”) assigned to bring Tucker to justice. Hunt, like Tucker, has a “what’s to get excited about?” attitude, but becomes increasingly determined to crack the case once he realizes that Tucker is part of what is referred to as the “Over the Hill Gang,” consisting of cohorts Waller (Tom Waits, “The Imaginarium of Doctor Parnassus”) and Teddy (Danny Glover, “Sorry to Bother You”) who form a fearsome group of gentleman robbers.

Complete with topical songs and an overbearingly “cool” film score by Daniel Hart (“Pete’s Dragon”), the film has a seventies look and feel that brings us back to the time when character studies were more in vogue than superheroes. Lowery has said, “I wanted him (Redford) to be the prototypical American outlaw. I felt that it needed to look as if it was made in a bygone era and that the archetype itself would work better if the movie felt like it was entirely cut from a cloth that was several decades old.” In showing the easy social acceptance of Hunt’s African-American wife, Maureen (Tika Sumpter, “Ride Along 2”), and their two mixed-race children Abilene and Tyler (Ari Elizabeth Johnson and Teagan Johnson), however, the film becomes nostalgic for a 1981 Texas that never existed.

While The Old Man and the Gun may give some viewers moral pause, it simply continues the Hollywood tradition of glamorizing outlaws in films such as “Bonnie and Clyde” and “Butch Cassidy and the Sundance Kid,” once enemies of the law but today regarded as colorful folk heroes. Of course, at the end they all got their comeuppance, but breaking the law can be fun while it lasts. There are no moral distinctions in the film and critics have referred to Tucker’s criminal activities as a “skill,” a “hobby,” or even an “art form.”

Sounding like a volunteer at a homeless shelter, one critic states that Tucker is “a man who loved his work.” Lowery asserts that he is “always attracted to these characters because of their spirit.” For the director, the idea of “getting away with it” has a certain appeal and he compares it to his own life as a filmmaker who feels like “he consistently has to get away with it.” For others, however, who do not look at robbing hundreds of people of their money as a fun thing to do, getting away with it is problematic. 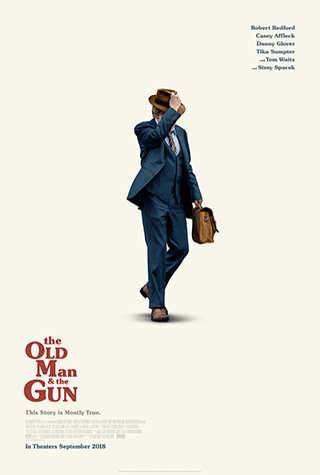