Caught between action flick thrills and hefty existential drama, Timothy Woodward Jr.’s film, Silencer, ends up in an unconvincing purgatory which neither excites or provokes.

We open with a squad of US Marines in Iraq. It’s all radio banter and “Copy that!” and it looks like it’s been filmed with sunglasses over the lens, so the fear is we’re about to see “Call of Duty 4: The Movie.” But this is just setting up the context for our traumatized hero, Frank (Johnny Messner, “Hostage”).

Ten years after the botched op, Frank is living in New Mexico with his girlfriend Cass (Nikki Leigh, “The Sand”) and her daughter Shannon (Kai Scarlett Williams, “American Violence”). Now working as a mechanic, the military life is behind Frank — except for the memory of killing an Iraqi family, the guilt of which is eating him alive.

At some point in the ensuing years, Frank has been in prison. We assume he’s also worked as a mercenary or contract killer of some kind. He has a history — perhaps a blood oath — with ex-inmate Lazarus (Robert LaSardo, “The Human Centipede 3”), who now works for local ganglord Lenny (Danny Trejo, “Machete Kills”).

When Lenny’s daughter is killed in a hit and run incident, he calls upon Frank to take out the person who did it. This “one last mission” does not go to plan, and Frank’s new family is threatened. Events slide predictably toward a violent showdown with Lenny and his gang.

So, without going into the finer nuances, Silencer is basically “Commando” (right down to tracking down the evil Central American overlord’s mansion), only it’s shot like “Sicario.” By which I mean New Mexico seems to be without electricity and everyone illuminates their homes with carefully positioned candlelight.

Inevitably, Sean Mick’s debut script has none of Taylor Sheridan’s bleak poetry or existential incision. “One of us isn’t walking out of here alive,” Lenny says to Frank. “And as I have a gun, that might be you.” Wait, so Frank is walking out . . . dead? At best it’s closer to Cormac McCarthy’s ear-bleeding screenplay for “The Counselor.”

Woodward Jr. has a sense of style, but no sense of storytelling. The pacing is simply too slow for such a simple and over-familiar story. It’s a C-movie masquerading as art. There’s more footage of Frank drinking (or thinking about drink) than action; more footage of Frank remembering violence than doing violence to others. Treating subject matter seriously is one thing, but over-indulging a plot we’ve seen countless times before is another.

The opening act is glue-shoed in its march toward the overused “last job” trope. And it makes way for the equally tired trope of the hunter’s nature. “You can’t escape who you are, Frank!” warns the mob boss. To be fair, Lenny, he might be able to escape if you weren’t ruthlessly blackmailing him. One of the opening scenes sees Frank sitting in silence in group therapy for alcoholics, and you can practically hear the cathartic bookend being placed at the other end of the movie.

Between those bookends are occasional sprigs of action, both melee and gunplay, and those scenes admirably prioritize clarity over kineticism. On the macro scale, the editing is less successful — or perhaps it’s a flaw with the writing — but either way certain key events aren’t clearly depicted. For example, at one point the fact that Shannon has been kidnapped seems to be left to audience assumption. Later, I only realized the characters had traveled beyond the border when they whipped out a map of Mexico.

Moreover, the plot doesn’t dovetail with the characterization. Frank is haunted by his past — the memory of killing that Iraqi family — which appears to make the decision to go after Lenny peculiarly agonizing for him. Yet there’s no moral quandary here, at least not in the language of the action movie. Go and kill the evil druglord who blackmailed you, attacked your wife and kidnapped your daughter? It’s a no-brainer with no emotional or moral parallel with the killing of innocents in wartime.

The prolific Messner delivers a truly bizarre, wild-eyed performance, while Trejo is vastly out of his depth trying to convey the inner conflict of a grief-stricken father. In truth, former Playmate Nikki Leigh gives the performance of most range, even if her character makes no sense. She yearns for a regular life, begging Frank not to draw their family into violence — but then, when he rescues them from violence of his very own making, it seems to draw her closer to him.

It’s indicative of the uneasy marriage between genre cliché and vapid attempts at profundity that muddle the film. For a work that ambles painfully early on, and is ostensibly concerned with the repercussions of killing, Silencer leaves a lot of loose ends and easy resolutions, as if returning to its simplistic trash roots in its final reel. So, it feels like a film that’s not so much subverting the rules as cheating them, and from an audience perspective that makes it particularly hard to swallow. 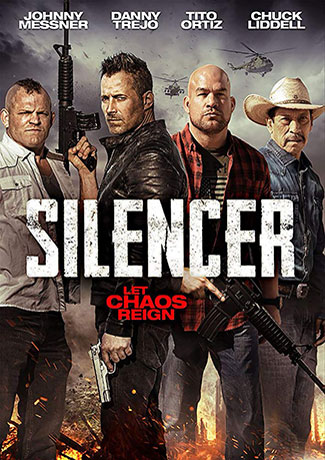