In comparison, the western world’s absurd fascination with social media, online celebrity/fandom, and socioeconomic gain in virtual reality seems to take a noticeable backseat to the immense obsession that is China’s ultra-live streaming epidemic. Filmmaker Hao Wu’s tellingly spry and insightful documentary People’s Republic of Desire is an involving expose of this technological addiction gone wild. Slickly produced, energetic and intrinsically revealing, the film craftily delves into the fragile psyches of the souls — live streamers and their devoted patrons — and taps into the lucrative business of the YY live streaming platform and its persuasive impact on its dedicated youthful creators and eager consumers.

Wu (“The Road to Fame”) creates a schism of sorts when exploring the popular (and polarizing) realm of China’s two biggest and influential stars in the YY live streaming game: Shen Man and Big Li. In doing so, it is clear it is meant as a cautionary tale of success and admiration for the content makers and their invested backers as they desperately seek validation from the millions in the Chinese population — the haves and have-nots alike — who are willing to revel in the adulation of these profiting personalities. Interestingly, the movie audience is left wondering about the whole live streaming experience as a whole. Is it a cemented lifestyle that is here to stay for the countless millennials it either recruits as instant celebrities or paying customers? Is it a glorified scam posing as innovative, glossy escapism for its faithful followers willing to pay for the pleasure?

Indeed, People’s Republic of Desire makes viewers aware that digital invasion as online entertainment is the ultimate pastime where young people — if they are lucky and resourceful enough — can earn big-time bucks and wallow in notoriety and wealth. However, the downfall in dealing with the pressures of maintaining the top spot of the live streaming ladder (measured by viewership) can take its toll. The live streaming performers and their specialties — singing, comedy, dancing, topical discussion, etc. — inherit the burden of financially keeping afloat the YY outfit, hired talent agencies, and alas . . . their friends and families. Often with devastating outcomes.

As mentioned, Wu’s narrative specifically spotlights a couple of twenty-something YY players in Shen Man, a former petite and pretty nurse-turned-singer and Big Li, a slightly chubby man-child comedian. The story line traces both streamers as they drum up support from their fanatical followers around a “star-studded” online event crowning the live streaming elite. Affluent followers, in particular, get a golden opportunity for recognition from their favorite online entertainer by buying votes for them to push them ever higher on the leader board.

The backstories for Shen Man and Big Li are first slated in their obvious triumphs within their live streaming “brand.” Shen’s singing is intoxicating to some of her patrons (the gals see her as inspiration while the guys sexually suggest their titillating thoughts towards her). On the other hand, the cocky Li’s wild and wacky shouting convincingly satisfies his hungry fans — particularly an impoverished migrant worker stuck at low-paying menial jobs who sees his live streaming hero as “a king.” By vicariously living through the splashy on-air lives of “once ordinary” nobodies such as Shen and Big Li these devoted patrons of low-income means (or “daosi”) can fantasize about their own potential dreams for stardom and riches. For some, much like the hopeless migrant worker, they can find a robust connection through the interactive world that seemingly would never get within grasp of their harsh realities.

Inevitably, the wheels start to roll off the gravy train for the touted twosome.

21-year-old Shen Man is the sole bread-winner for her family. She contemplates funding her sister’s expensive college education, while her unemployed father and step-mother visibly leech off of her live streaming fortune. She admits to being completely exhausted. Furthermore, Shen has deep-seated mommy-related issues. When she entertains meeting up with some of her male viewers to boost her live streaming profile she is criticized and called derogatory names in retaliation.

In the meantime, the loutish 24-year-old Big Li believes in his own hype to the point that he is neglecting his wife Dabao (an instructor/agent in the live streaming industry) and toddler son. Big Li is bored with his marriage, but the swagger is ignited when the crazed comic showboats for his patrons in front of his webcam and microphone. However, the one thing that eludes the roguish man and consumes his every thought is prevailing as the champion at the revered live streaming competition after coming up short year after year. When a big donor fails to put Big Li over the top at the competition as promised the dejected host, handlers, and his fanbase are deflated beyond repair (again). Now with a broken family life and financial setback, the defeated Big Li succumbs to an on-air breakdown of uncontrolled tears.

People’s Republic of Desire is an intriguing documentary about the rigors of youth and online entertainment in China. Wu deftly investigates the potentially shady phenomenon behind YY live streaming and how it engulfs the wannabes looking to break out of poverty for the lifetime shot of privilege, as well as the desperate worshipers trading in human interaction for the illusion of a connection with their youthful, online heroes. Noteworthy praise goes to Eric Jordan’s graphics, animation, and special effects that give the film its wily, frenetic makeup. His work is brilliantly combined with the toxicity of Chinese youth-driven angst where the passport to unreachable prosperity and respectability is situated in the cradle of manufactured exploitation — a shadowy solution to the destitution and detachment of China’s aimless populace. 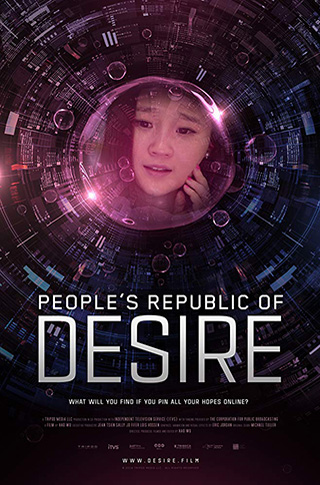