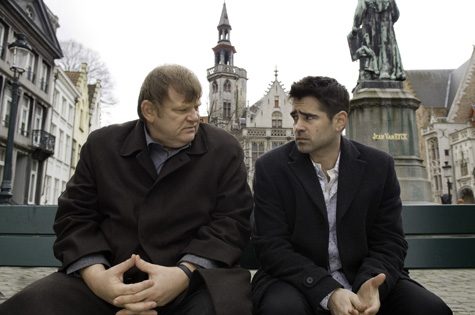 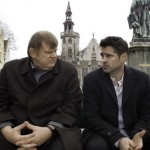 Wow. That one word is all that is truly needed to complete a movie review of In Bruges, the movie from novice writer and director Martin McDonagh (his short film Six Shooter discounted). The reason for the high praise is simple, he’s taken his cues from Quentin Tarantino (Reservoir Dogs and Pulp Fiction) and Guy Ritchie (Lock, Stock and Two Smoking Barrels, and Snatch.) and put together his own darkly funny, smartly written, character driven story.

Those characters are Ray (Colin Farrell) and Ken (Brendan Gleeson) — a seemingly recast of The Odd Couple — two Irish hitmen sent off to lie lay low in Bruges, Belgium, when a hit orchestrated by Ray goes horribly wrong. Ray, we quickly find out, is a politically-incorrect, live in the moment fueled kind of guy, with a strong penchant for finding trouble (or having trouble find him, as he would put it). Len, on the other hand, is the time-grizzled veteran — the defacto father figure of the duo — intent on doing as instructed by their handler Harry (Ralph Fiennes).

Doing as they’re instructed turns out to be harder than it seems though. Ray is completely unenamored with the city, finding faults with all that it is know for — canals, architecture and cobbled streets — and letting everyone in earshot know it. But when he stumbles upon a set at which a film is being shot that features midgets, his attitude changes to that of a spoiled kid in a toy store. Oppositely, while Ray is canoodling with the set caterer Chloe (Clémence Poésy) and the starring dwarf Jimmy (Jordan Prentice), Ken is delivered news that changes his entire outlook on the situation. To tell you what it is would be a great disservice to the film, so I’ll just say that the turn the movie takes to the end is superbly done — never losing a beat — even if there is a bit of exaggeration thrown in to make it all work. 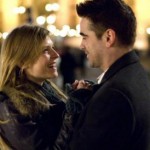 Love is in the air.

But this exaggeration is so easy to overlook, because the characters and the actors portraying them are so damn good. To all the critics that have pissed on Colin Farrell in the past (I’ll have to double-check but I don’t think I’m one of them), In Bruges is his response to you. I can honestly say that I didn’t think he was acting. Everything he said and did appeared completely natural to him (so let’s hope he hasn’t actually killed anyone!). Likewise, Brendan Gleeson plays the perfect straight guy without playing the straight guy. And while it was hard to fathom the decisions he makes, I could certainly empathize with him. Ralph Fiennes once again proved to me why he is one of the more accomplished actors of the day. He’s not in much of the movie, but his presence took everything to the next level.

Which leads me to Martin McDonagh, the man responsible for In Bruges and its high level. It’s clear he’s done his studies on Tarantino and Ritchie because his intertwining of seemingly unrelated characters is so very well done, that it can only be surpassed by them. And it was a master stroke, setting such a dark and, at times, violent movie in such an inspiring locale (it’s on my list of places to visit that I never will). Simply put, everything he needed to happen, happened, just as he envisioned it when he first sat down to write this screenplay. I can honestly say that I am anxiously looking forward to his next film project (he’s mainly focused on theater).

So what are you waiting for? Just because In Bruges is in a limited U.S. release is not a reason for you to not find a cinema it is playing at. See it. Become a better person for doing so. 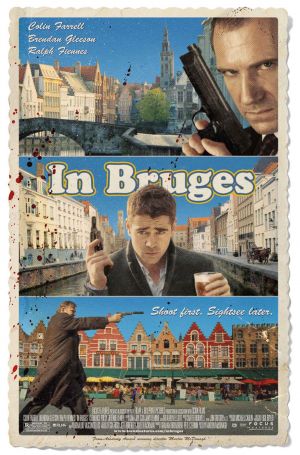