They are children of the streets. You can see them in the slums and marginalized neighborhoods of every major city in the world — begging, selling trinkets or other wares, carrying heavy loads for some uncaring employer, or just hanging out. Without papers that prove their identity, they cannot go to school, find work, qualify for a passport, or even receive treatment at a hospital in case of emergency. Many do not know when or where they were born and have never celebrated a birthday. Winner of the Jury Prize at the 2018 Cannes Film Festival and one of five films nominated for Best Foreign Language Film at the Golden Globes, Lebanese director Nadine Labaki’s (“Where Do We Go Now?”) masterful and deeply affecting Capernaum focuses on these street kids of Beirut, Lebanon whose daily life is marked by a struggle to survive against odds stacked against them.

The film’s title refers to a “disorderly accumulation of objects,” a name appropriate for children who are regarded as objects, not people. Labaki spent years researching the film by talking to hundreds of children and their parents, often visiting detention centers and areas of the city off-limits to the public. One of her conclusions is that some people should not be parents. “I would go into these shacks,” she says, “and see kids who were left alone all day. You start to ask yourself, what kind of mother leaves her child alone, with nothing to eat for the entire day? I would see a mother breastfeeding tenderly,” she says, “and then minutes later, she would turn around and smack her child.” The main focus of the film, however, is on Zain (Zain Al Rafeea), a Lebanese boy of uncertain age who looks like eight but is thought to be twelve. He is serving a five-year sentence for stabbing a victim whom he describes as a “sonofabitch,” much to the judge’s (Elias Khoury) consternation.

Represented by his lawyer (Labeki), Zain is suing his parents, mother Souad (Kawsar Al Haddad) and father Selim (Fadi Yousef), for bringing him into the world without being able to offer any affection or adequately provide for his care or safety. As Zain, Al Rafeea is not only a charismatic actor but an authentic one, a boy who, as a Syrian refugee, has been working as a delivery boy since age ten, living through similar traumas faced by his character in the film. Capernaum opens in a courtroom. As the scruffy, foul-mouthed boy is led into the room in handcuffs, we are taken back to events leading up to the present moment. While the lawsuit at first appears frivolous, the heartbreaking story that ensues makes it seem credible. Running errands for a local shopkeeper, taking part in his family’s scheme to sell the drug Tramadol to prison inmates, and taking care of his many brothers and sisters, Zain knows nothing about the joys that childhood has to offer.

Especially close to his 11-year-old sister, Sahar (Haita Izzam), he is distraught when she is sold into marriage and runs away headed for a town near the beach. On the bus, a strange-looking man (Joseph Jimbazian) dressed in a Spider-man costume (calling himself Cockroach-man) leads him to a raunchy amusement park. It is here that he meets undocumented Ethiopian immigrant Rahil (Yordanos Shiferaw) and her one-year-old son Yonas (Boluwatife Treasure Bankole), a child she keeps hidden from her employer and the authorities for fear of deportation. Working to save enough money to buy a new forged ID card from the sleazy trader Aspro (Alaa Chouchnieh), Rahil shows kindness by bringing the hungry Zain to her ramshackle home.

Here she provides free room and board for his service as a babysitter for Yonas, whom he passes off as his brother (irrespective of the difference in their skin color which he attributes to his mother drinking too much coffee when she was pregnant). Though Zain cannot escape his impoverished circumstances, in bonding with Yonas, he finds that touch of caring that has always eluded him. When Rahil disappears after a visit to Aspro, however, a heartbroken Zain has to care for the little boy by himself, once again taking to the streets, wheeling Yonas around in a makeshift cart built from a skateboard and a cooking pot. Under the guidance of cinematographer Christopher Aoun (“Kalveli: Shadows of the Desert”), it is an indelible image.

Reinforced by Khaled Mouzanar’s haunting score, even though it is filmed in a specific location, Capernaum touches a universal chord. Like the biblical city of the same name where, according to the New Testament, miraculous healing took place, the film does not wallow in misery but offers a glimmer of hope and a common humanity. While it is dark and often hard to watch, Capernaum gives us the opportunity to listen to the “voice of the voiceless.” It is a voice that must be heard. 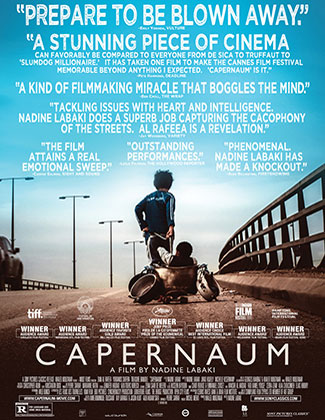