Simply put, Who Will Write Our History has an intriguing premise. Set in the World War II and during the massacre of people famously known as the Holocaust, it depicts a group of Jews’ desperate and personal journey to leave behind time capsules, so their pain and suffering would never be forgotten. It’s an interesting dichotomy that juxtaposes the aggressive nature of the Germans against the more passive approaches of the Jewish writers.

However, even though the idea is interesting and boundless with potential, this 90-minute documentary is far too bloated, cold, stale, lifeless, and worst of all-indulgent. For a massive portion of the film, director Roberta Grossman (“Above and Beyond”) simply goes in circles, with little progress in the story being made. It’s a frustrating mistake that seems to reveal how little ground Grossman was able to stand on. And while its ambitious attempts in merging a variety of mediums: Interviews, recreations in original scenes, voice-overs, photographs, historical footage, etc., are respectable, it comes off more disjointed as the mediums never merge to create a collective experience.

If there is one thing that Grossman and company handle capably is the film’s gorgeous look. It certainly won’t rival high-budget productions, but cinematographer Dyanna Taylor has some excellent shots bundled in here. One in particular towards the end of the film sent actual shivers up my arm, with its sheer intricacy juxtaposed with a short simplicity. In addition, Jowita Budnik (“Saviour Square”) as Rachel Auerbach and Piotr Glowacki (“Dark Crimes”) as Emanuel Ringelblum are moderate, even if their roles aren’t much by any stretch of the imagination. At their worst, they are minor annoyances, but at their best, they propel the constantly dragging story.

But what makes Who Will Write Our History a disappointment more than anything is its disastrous pacing and storytelling. It certainly has the story ideas to tug at heartstrings and create dynamic emotion with the audience, but it does nothing even remotely close to that. Its atmosphere is so stiff that it becomes impossible to relate with any of the characters. In addition, its focus proves to be so scatter-brained that the audience’s attention is never set on a character for more than a mere twenty minutes. Grossman chooses to transition between multiple characters, most likely to envelope the audience in the dire situation, but it comes off as overbearing. There simply is no practical use to these sequences and just the very inclusion of the first half of the film ruins whatever concept the script may have had planned. She isn’t able to fully express the characters, making them anonymous strangers at best.

As a whole, Who Will Write Our History plays like an embarrassment of riches when the host actually has no riches to begin with. Its overconfidence and egotistical attitude with its storytelling proves to be its downfall, as it causes the film to lose any footing with the audience. Its conclusion isn’t satisfying, mostly because it relies on groundwork that wasn’t done in the previous acts. Grossman and cinematographer Dyanna Taylor may have created a visually stunning film from a rather small budget, but the sheer amateur-nature that the storytelling entails is far from excusable.

'Movie Review: Who Will Write Our History (2018)' has no comments 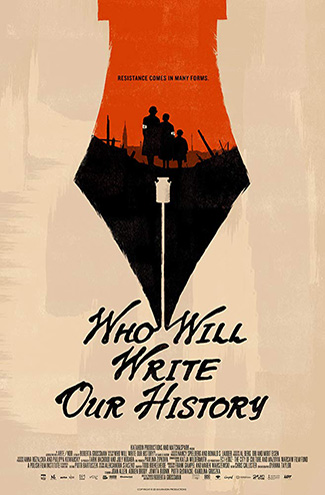