I decided to take a chance. Rarely do I sit and watch movies or television shows about poker. The last time I did was in 1998 for the movie “Rounders” and that was only because I think Edward Norton is a great actor. I avoid movies about poker because they are boring. Unless you’re heavily into the mechanics of playing a hand, it is impossible to sit and watch a poker game. And no matter how you cut it or try and dress it up, there will be a lot of scenes of poker games — which leads us down the boring path. I’m not entirely sure why I took a chance on Lucky You. I believe it had two possible reasons:

I suspect the second reason is the truer . . .

Whatever the reason, Lucky You falls short of any possible expectations I may have had for it. The overwhelming reason (putting aside the poker aspect) is the lack of chemistry between Huck Cheever (Eric Bana) and Billie Offer (Barrymore, “Music and Lyrics”). Within the first few days of meeting, we are supposed to believe these two people are romantically linked. Yet, each scene in which they are in together gave me no feelings of intimacy. They almost played against each other like friends of convenience — no real emotional attachment — just a buddy to go to the bar with because you’d rather not go alone. This lack of connection hurts the movie in a major way, because Billie is the arrow that breaks through Huck’s tough exterior and helps him to repair his relationship with his father, L. C. Cheever (Robert Duvall, “Kicking & Screaming”). It was extremely hard to swallow that pill when they gave off such chilly feelings.

On the other hand, a plus for Lucky You was the casting of Robert Duvall. As always, he comes to the party to dance. He doesn’t have much in the way of screen time, but the moments the camera turns his way, he steals the show. The man has been onscreen since the 1960’s — 40+ years — and he’s still got that special aura emanating from him. Watching him school his son (in the movie) and Eric Bana (in real life) is almost worth the price of admission. Another plus, on a much smaller scale, is Horatio Sanz as one of the Las Vegas bet-on-anything guys, Ready Eddie. His is a minor part, but his comic delivery and outright zaniness are welcome tangents to an otherwise ho-hum movie. 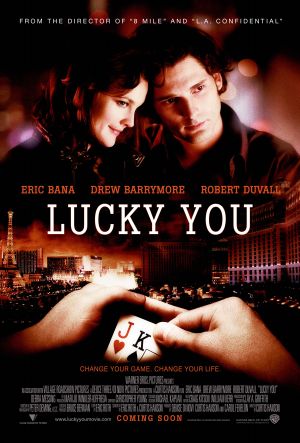