Entertainment guru Tyler Perry plants his fingertips on yet another toothless comedic concoction that has more cockeyed misfires than Madea’s gun rack display. In Perry’s latest baseless romantic comedy Nobody’s Fool, more of the same formula applies; tiresome stereotypes accompanied by forced melodrama and transparent seeds of recycled zaniness. Clearly, it has been a reliable formula for Perry’s creativity in film and television throughout his career, so why should the relentlessly contrived Nobody’s Fool be any different from the previous formulaic farces that Perry force feeds his ardent admirers?

This time Perry peppers his misplaced material with spotty plotting and strained chuckles while relying on the uneven pairing of big screen beauties Tiffany Haddish (“Keanu”) and Tika Sumpter (“The Old Man & the Gun”) to carry the lopsided load of labored smirks.

Haddish, the Emmy-winning anointed “It” girl since her breakout turn in “Girls Trip,” is on board to showcase her trademark shtick as an over-the-top “loud and sassy black chick” caricature out for easy laughs. Sumpter, who currently enjoys her long-time dastardly diva role on Perry’s television serial “The Haves and the Have Nots,” is there to counter Haddish’s eye-rolling manufactured mockery. Unfortunately, the teaming of Haddish/Sumpter fails flat because, as potentially capable and striking as these women are, as a comedy connection they are undermined by the seen-it-before, slapdash script.

Danica (Sumpter) is a successful Manhattan-based advertising executive that seemingly has it all together: Good looks, materialistic stability, and a profitable, professional career. However, Danica has one glaring blemish — her questionable love life. Danica is, against better judgement, courting a mysterious online boyfriend that may be cheating on her, and her co-worker/best friend Callie (Amber Riley, “Straight Outta Oz”) is not too thrilled about it.

Just released after a five year prison stint, Tanya decides to crash at her sister’s posh pad. Their mother, Lola (Whoopie Goldberg, “Teenage Mutant Ninja Turtles”), is fine with her offspring living as roommates just as long as Tanya stays away from her place of tranquility. Queue the obvious give-and-take between the uptight, money-making sibling and the carefree, uncouth sibling. Interestingly, Perry chooses to not go the “Cain and Abel” route to highlight the adversarial nature between the sensible Danica and seedy Tanya. Instead, he opts for more of an “Odd Couple” approach to the sisters’ quirky relationship.

Soon, Tanya agrees with Callie’s disdain towards the man Danica pledges her blind faith in, especially since, while landing a job at the coffee shop that Danica frequents on a regular basis, Tanya witnesses how her boss Frank (Omari Hardwick, “Sorry to Bother You”) has eyes for her clueless sister. Tactically, Tanya enlists MTV’s “Catfish” personalities to help reveal the true shady nature of Danica’s internet beau. Even so, Danica is frustrating because she wants to solely gamble on the affections of an unknown entity that may be double-dealing her as opposed to a checking out a humbled, flesh-and-blood barista who would cut off his right arm for her.

Indeed, Danica would appear to be someone’s fool.

Unfocused and a total mess in narrative sensibilities, Nobody’s Fool needlessly shifts gears from sister squabbling as a supposed three-way love triangle unfolds further muddling the one-note story and paper-thin plot. Perry had something quite promising — a seemingly independent well-to-do woman that does not exactly have her act together. The insecurity of an attractive professional woman hanging on to an unknown online love interest while dismissing a front-and-center suitor could have been an intriguing, unconventional premise. Sadly, Sumpter’s Danica is shallow and unlikable and it is unclear as to why she has such an aversion to considering the handsome Frank for her heart. Is Frank not good enough financially for her? When was the last time her cyberspace wooer sent her his financial portfolio? How stuck up can Danica be anyway? After all, she has a stoner mother and ex-con sister!

Of course none of that matters as the comedic keys are simply handed over to the exasperating Haddish to drive this slapstick vehicle into the ground at speed. And once again Haddish delivers the cartoonish “black woman sass” — an exhaustive and embarrassing display of foolery that is relentlessly loud and out of tune. When it comes to giving the movie masses dismissive cinematic junk, both Perry and Haddish again show audiences that we’re the fool for lining up at the box office for this trippin’ tripe. 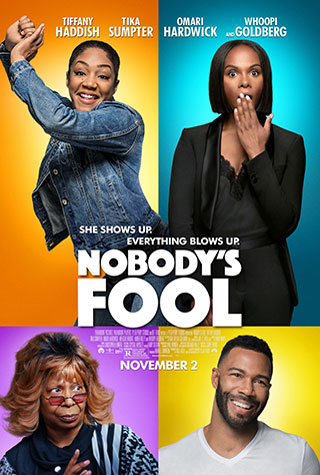