The effects of bullying and the pressures to achieve popularity in a high school setting are put under a harsh and unforgiving microscope in director Jonatan Etzler’s dark short Get Ready With Me. Opening with mopey teacher Lukas (Shanti Roney, “Applause”) asking his students to show their video projects to the class, the movie immediately takes a chilling turn when willing volunteer Vendela (Miriam Benthe) plays a video wherein she instructs her viewers how to most effectively kill themselves.

Lukas interprets this as a cry for help and finds himself so worried about Vendela’s safety and mental health that he tries to befriend her and even confides in her by sharing tales of his own self-esteem issues. The script by Amanda Högberg and Axel Nygren is designed to keep us guessing, dangling clues in front of us, but keeping the answers just out of reach until the end.

Once all is revealed, the movie has formed a clear statement about its subject matter and it’s here Get Ready With Me proves somewhat difficult to grapple with. Vendela’s story is quite unpredictable, but the twists and turns still align with the opening scene’s suggestion that the challenges of navigating adolescent social circles are compounded by the expanding presence of social media.

Vendela has a YouTube channel where she posts her instructional videos for a small audience and it seems her primary goal is to grow her viewership. Social media offers a gateway to popularity that can be achieved with little more than a smartphone and an idea, something that Vendela apparently finds intoxicating.

Even that veiled semi-synopsis risks giving too much away, but the puzzle pieces are assembled cleverly enough that it’s tough to know exactly where the story is headed until the credits are rolling. That’s impressive for a short film that appears to show its cards quite early and which focuses its plot almost entirely around just two characters.

The issue that becomes increasingly hard to ignore is that this is a story of an adolescent girl going through a tumultuous experience, seeking acceptance and identity, and yet the movie’s protagonist is a thirty-something male teacher who is given a deeply sympathetic arc. There’s something backwards about the narrative approach and the decision to adopt this angle seems to be merely the result of a plan to structure the pic as a sinuous mystery.

As a result, Get Ready With Me is less an insightful look at the intense pressures adolescents operate under and more a crafty suggestion of how nastily and dangerously a response to these pressures can manifest itself. The movie vilifies the youth, which seems a curious choice given the chosen topic.

The presentation is so gravely serious that there’s a heavy sense of condescension on the part of Etzler, who makes clear how warped he feels youthful minds have become in the digital age. At the same time, an alternate approach might have skirted too close to sentimentality, which wouldn’t have done the subject justice, either. This is a mean-spirited look at an extreme scenario, but perhaps there’s some truth buried in its excessiveness.

With fantastic performances to lend authenticity to a potentially far-fetched concept and an eerie mood that magnifies the grim details of the plot, Get Ready With Me certainly leaves a mark. It’s a difficult movie to embrace because it’s concerned with human emotion in scary situations and yet it alienates our own emotional response by opting for shock turns, which then trivializes the plight of its characters. But it remains a strangely searing work that is deeply rooted in the now, so its modern concerns emit a vicariously vital vibe. 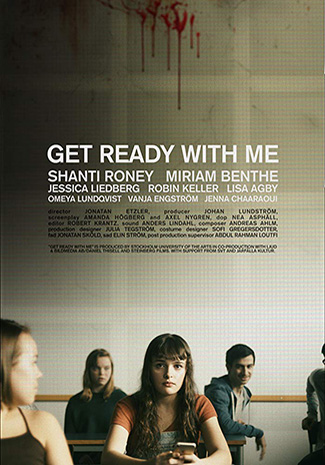