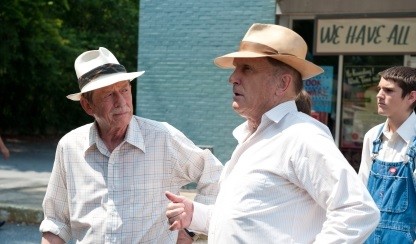 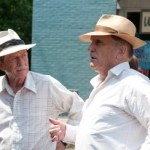 Jayne Mansfield’s Car is a tedious, depressing dysfunctional film about a tedious, depressing, dysfunctional pair of families, headed by patriarchs Robert Duvall and John Hurt, respectively. It seems that 30 years before, Kingsley Bedford (Hurt) stole Jim Caldwell’s (Duvall) wife, Naomi (Tippi Hedren, whose most famous role was in Alfred Hitchcock’s “The Birds“) and took her to England. Upon her death, and after honoring her request to be buried in her native Alabama, the two groups get together and relive just about every stereotypical situation involving these divergent bodies from sitcoms to equally bad motion pictures.

It’s also a movie where the title makes no sense whatsoever, except to fool this critic into actually thinking the plot was about the last few days and death of blonde bombshell Jayne Mansfield, who perished in an automobile accident in New Orleans in 1967 (her three children, including “Law & Order: SVU” actress Mariska Hargitay, survived in the back seat). There is a very loose connection with this movie to that death car, but THAT story would have made a much better and much more interesting film than this disjointed, disheveled, directionless and pointless misadventure which seems to be played at 33 1/3 RPM and was helmed and written by Billy Bob Thornton (who also stars and has efforts like “Sling Blade” and “All the Pretty Horses” to his credit, although one would not deduce that from this travesty).

When combined there’s enough cracker barrel cornpone dialogue in Jayne Mansfield’s Car to fill three seasons of “Hee Haw,” forced drama that would make the producers of “Dynasty” and “Knots Landing” cringe, while the families’ attempts to mix and interact socially is as awkward as Barack Obama teaching a college course on the history of Syria. And, despite the legitimate anger the Caldwell’s feel for the Bedford’s, Skip nevertheless comes onto Camilla in a most ridiculous and embarrassing way (making Bill Clinton’s advances look like the height of courtly honor; although later she recites the “Charge of the Light Brigade” for him totally naked while he, uh, pleasures himself), Carroll hangs around the world’s squarest hippy commune and ogles creepily as his twenty-something girlfriend dances nude in their shack, and Papa Caldwell get his kicks by interfering at the scene of fatal car wrecks (a ludicrous montage shows various examples of these crashes with victims hanging out of windows causing no end to the unintentional hilarity). Meanwhile, Jim’s promiscuous daughter, Donna (Katherine LaNasa, “The Campaign“), begins flirting with the ponderous Phillip and we find out that the cold-hearted Jim was somehow a World War I veteran and the peacenik Carroll served in WW II. And, to top everything off, the picture boasts one of the single lamest musical groups ever, despite the fact it was supposed to have taken place in the 1960s.

All of these scenes, of course, are meant to show that both clans are Hollyweird types, just quirky enough to be harmless, but nowhere near as clever and intriguing Thornton and co-scribbler Tom Epperson (“Camouflage“) hoped they would be.

Holding together (albeit loosely) all of these sad plotlines is the wise-beyond-her-pay-grade servant, Dorothy (Irma P. Hall, “My Son, My Son, What Have Ye Done“), who fills us all in on the boring backstory. Boring because there is no sympathy, empathy or concern for any of these cretins. Not one iota of interest is generated by these far-out characters so over-the-top and devoid of any real human qualities as to be less than one-dimensional, if that’s even conceivable. Then there is a subplot of a black dude who gets drafted, again, a dilemma which causes no emotional response whatsoever, but does illicit this bland response from Carroll: “A kid like Connell has a dream and he doesn’t get a chance to live it.” 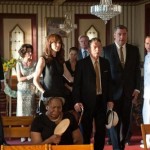 Gathering at a funeral.

Hurt (whom some may remember as the guy whose stomach the monster came of in “Alien“) was nominated for a Best Actor Academy Award for “The Elephant Man,” Thornton was given a nod for the same prize in “Sling Blade,” and Duvall actually won the Oscar for “Tender Mercies,” so the acting talent and pedigree is certainly there. Unfortunately, there is nothing any of these people can do with this tepid script, however. Hurt, though, does have the good sense to pass out at the funeral, thereby giving himself (as well as the audience) a reprieve for a while.

Jayne Mansfield’s Car, which has been left in the film can for more than a year (and certainly smells like it), is enjoying a limited release schedule, but that is only because distributors knew no one would see it with any wider distribution. One would be most prudent and wise to follow their example. 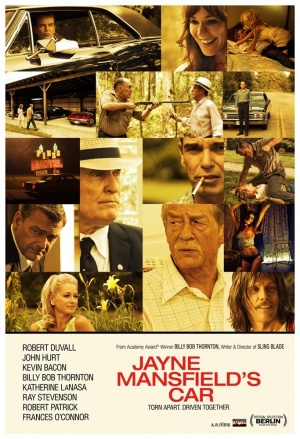