From Andrew Wiest, director of the Christian fable “The Adventures of Chris Fable” (no, really), a bargain bin supermarket exclusive from 2010, comes The Forlorned, an inept, micro-budget horror movie. It aims low and delivers; and although it fundamentally fails as a horror movie — or indeed any kind of a movie seeking to tell a coherent story — there are moments of silly fun.

Tom Doherty (Colton Christensen, “Treasure State”), grieving over the drowning of his fisherman father, arrives on a remote island off Nova Scotia to become the caretaker of a haunted lighthouse. I mean, the haunted part is right there in the job description. The local publican, Murphy (Cory Dangerfield, “Templar Nation”) – one of only three people apparently living in the mainland town — is entirely upfront in his prophecy that Tom will go mad and die, like everyone else who’s taken on the role.

Tom is mercilessly taunted by disembodied voices, suicidal seagulls and a family of creepy dolls nailed to the bedroom wall. And that’s just the first night. It doesn’t help that Tom is an already nervous fellow, freaking out at the slightest bump in the night. (Or day, or whenever.) “Old houses make noises,” dismisses Murphy. Sure, Murphy — but they don’t usually contain a phantom radio which willfully plays the sounds of human torture.

Murphy also says, “Don’t you go nuts on me!” after explaining the house’s history of violent death. Of course, Tom does go nuts, and rapidly. The plot doesn’t so much involve Tom peeling back the layers of the lighthouse’s mystery; rather, he meets a series of slightly unhinged side-characters who each deliver yet another backstory. By the end of the movie we have a veritable compilation of spooky tales — so many that it’s difficult to discern a single coherent threat. Is it the clergyman from 1812 we’re meant to fear? Or the Ladies of the Lighthouse Restoration Committee, who keep leaving sinister notes and poisoned cake?

At least John Carpenter had the sense to stick with one historical context when he made “The Fog.” Borrowing from elsewhere, we also get the murderous boars from “Hannibal,” some “Prince of Darkness”-like radio chatter, and a dead-eyed doll on a rocking chair from . . . well, every horror film ever made. None of this is scary, you understand. The Forlorned is too impatient to build tension; too poorly framed to make us fear the space (there’s virtually no depth of field); too scrappily edited to build anxiety about the next cut; and too narratively overstuffed to provide an elemental threat.

But these flaws — born of the catastrophic tonal collision between hammy fun and creeping dread — also lend The Forlorned the honor of being enjoyably bad. It’s the kind of movie where an invisible pig setting off mousetraps is considered a legitimate horror set piece; or where a character will gladly believe a ghost saying that a demon lives within a farmyard animal, but will then scoff when the same ghost suggests reading the Bible. There’s fun to be had, even if we are laughing at the simple kid.

Whether the cast are embracing the film’s inherent absurdity, or whether they’re simple choking on the risible dialogue, isn’t always clear. Christensen appears permanently startled throughout; it’s only when he goes full Jack Nicholson in Jack Torrance mode — even to the point of directly addressing the camera — that his limitations as an actor are fully laid bare. In contrast, the late-coming Elizabeth Mouton (“The Singles Ward”) is so understated, she seems almost embarrassed. Or perhaps she’s just overwhelmed by the scenery-chomping behemoth that is Dangerfield, riding his lines like Robert Shaw’s Quint after a barrel of pirates’ grog.

They all talk of frightening things, but we’re subject to none of it. Wiest’s over-reliance on sound design is maddening: The sonic equivalent of excessive CGI deposited in post. Luke Dowler’s music is a schizophrenic mix which often points to doom, or hints at a distorted sea shanty, but is equally content to veer into listless acoustic guitar, vague piano or pedestrian Hans Zimmer pharps. The score is symptomatic of a film without a unifying theme to bind it. Yet, perhaps a more coherent film employing the same dubious talent would be truly unbearable. At least, as it is, The Forlorned can cling to the lifebelt of its campy, so-bad-it’s-goodness. 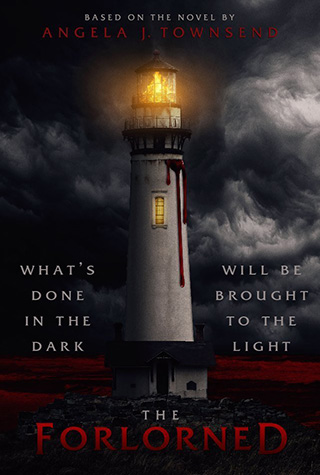