Neil Hamburger’s first gig in town was Neil Hamburger’s last gig in town. It took place on one of those flawless summer nights during which the desire to be covered by the sky tends to turn any indoor activity into an uncanny choice. And uncanny was the result. His act was the antithesis of the night lingering out the wannabe diehard pub that hosted it. It was one of the most awkward comedy gigs I have ever been to. Not only was it unfunny, but it was also confrontational and chaotic and grimy and . . . sad. And it could have risen to a most special niche in my heart (being the comedy lover I am) as a cult hero were not it because I was already prepared for that — somehow, he had made the front page of this city’s most popular independent newspaper (something like a weekly press release for local hipsters). Unfortunately for me, having read the story (mainly due to the fact that he defined his act as an anticomedic act) made me miss the shock his show would’ve given me had I had attended it without knowing a thing. Even more unfortunately, no one in the crowd ignored what they were going to see — even the hecklers seemed indulgently overacted that night.

Yet watching Entertainment gave me a little taste of what it would’ve been like for me to see one of Hamburger’s shows with no clue of what he did and no context of what he’s done. When I saw “the comedian” (Gregg Turkington, “Ant-Man”) without his stage persona’s attire, wandering around an airplane graveyard in the middle of the desert, I thought I was instantly going inside that world I missed the day I prepared myself to see him fail, the day I spoiled the surprise of having to listen to his jokes with no background, and then I reminded myself this world was not nice; it was depressing in a way that went beyond being merely sad — though sadness is the key of every note, of every single sound spawned by Hamburger’s mouth.

As a matter of fact, mono is the modality in which everything is shaped in this film. It is monotone, monochromatic, monocular, monodic and monadic, monogenetic, monographic, monolithic, monologistic, monophonic, monotonous and monomaniac and yet, strangely enough, not monolingual. This makes for the creation of the remarkable unidimensional characters that populate the comedian’s life, starting, of course, with the comedian himself. The unidimensionality of these characters, however, is not to render symbolic or allegorical types whose actions stand for larger qualities (vices or virtues). On the contrary, the characters’ whole make-up echoes the structure of the narrative they find themselves in: The point in which Greek and Latin loneliness intersect. The monouniversal navel present in every comedic act is the scar of the cord that once connected it to its original boredom.

The comedian, the main character in Entertainment, is nothing less than a professional pessimist, a licensed loser. We meet him visiting a lame touristic attraction (but a great site if found on your own) only to see him entering, repetitiously, into a string of cheap motel rooms, of crashed couches, of public bathrooms, of dirt roads and of dead-end shows. Each venue harbors a single action — beholding, calling his estranged daughter while she’s asleep only to leave her temporarily irregular messages, hanging out with people he doesn’t like from his creepily happy-go-lucky cousin (the always solid John C. Reilly, “We Need to Talk About Kevin”) to the down-on-his-luck creep he stumbles upon in a public washroom (the always eerie Michael Cera, “Scott Pilgrim vs. the World”) to an attractive chromotherapist he randomly meets (the always aloof Lotte Verbeek, “The Fault in Our Stars”) and who he somehow forces himself to hit on, refusing to help other people, futilely helping other people, peeing, showering or bombing on stage — that repeats itself in a capricious series of irrelevant events. At its core, we see a disgusted man constitutionally bereft of laughter. The only time we see him laugh is while he listens to another man talking in a different language (Spanish) as he delineates a gesture that signaled death, either suicide or murder (i.e., slitting his throat with his finger); the comedian mimics the gesture and laughs because, as it should be clear by now, death is a universal language.

Thus, the comedian is the imperfect mix of anger and sadness, which flows into an unnerving form of chronic impotence. Entertainment consequently develops into an eerie kind of road movie about a mean man meanly searching for the meaninglessness of life — and unsuccessful at that. It is as well an autobiographical film, the autobiographical account of an antithesis. He can only assert something when he talks to his daughter, and that’s because he talks to her only when she’s sleeping, so that during those days in which he’s too beaten up to avow anything at all, he can take shortcuts to wish her a good night. These calls usually proceed long shots in the desert, immediately followed by yet another bad show. And these shots make clear to us “the great distances” he’d traveled “to come here and bring some laughs to this community.” The truth being, he’s constantly oblivious, maybe even diffident of others’ needs. This is a man who would live in darkness weren’t he forced to turn on the lights. This is a man who has to be forced to see and to change and to change the lens with which he sees the world. It is only when his glasses are broken by an unwitty heckler he completely trashes (verbally), and who, in retaliation, completely trashes him (physically), that he’s moved to try a different lens, to see the world through a different color, to see himself with a different eye — and even then is just an emergency measure. This is a man whose first and only motivation is the inertia that keeps everything else going — the universe included.

The kind of character we find is therefore a man who is unable to listen to gratitude, but can only react to ingratitude. Those few who, however insufferable (i.e., the talentless clown that opens his gigs [the always cocky Tye Sheridan, “Mud”]), are good to him he ditches, leaves or openly insults. Those who are not so good to him, or just indifferent to his jokes, he ditches, leaves and openly insults. He is the kind of entertainer that “thrusts” his jokes into his audience’s “fool faces,” for he would trust his jokes to no one. Not his jokes. Not anything else. Thus Neil is nailed on stage, night after night after night. He just shoots and shits on his audience.

Perhaps Rick Alverson’s previous work showed nothing more than a promising director lost in a cornucopia of pointlessness. His films were too irregular for their own sake. He was able to go from brilliant to boring, from precise to pretentious in less than one shot. Perhaps. But Entertainment is an example of consistency — it is consistently tedious, and consistently sound. For instance, it is worth praising the way in which Alverson weaves the crisscross perspectives between audience and comedian, almost as though distancing themselves from the clash that’s happening right in front of their eyes (and ours). From an objective shot at a point right behind the slim audience pointing at the stage to the objective angle behind the comedian’s head that very much resembles the subjective point of view of his homunculi coldly, almost condescendingly observing a greasy, balding, sticky, smarmed blindspot — and being the only one laughing in delight.

Equally deserving of praise is Turkington’s work; his is a performance in the nude. Everything in his body incarnates what the comedian is, maybe because the comedian has been dwelling in him for far too long. From the defeated posture of a man who has made many mistakes and who bears many more to come to the wrath and woe imprinted in his weary face, Turkington owns his character and becomes the very extension of the hollow horizon that follows him through the Mojave Desert.

For yes, the comedian’s act is a replica of the airplane graveyard we saw him in at the very outset of the film, his jokes the planes crushed and scattered throughout the hopeless plain, right at the middle of a desert that replicates with much exactitude the meandering lines contouring his very self. When we see him laughing for the second time, right at the end of the movie, laughing at himself attired as a white cowboy in a low-budget Mexican sitcom we have watched him tune in every single motel he’s been in, we look at him slowly losing himself in what becomes a tantric tantrum. Laughter and sadness have become indistinguishable, pretty much like the sand is in the desert: Sandness. He, we have attested, does have the courage to bomb on stage, repeatedly, over and over again; his homunculi witnessing with us each and every time he does. Yet it becomes impossible to tell whether he’s doing it on purpose anymore, whether losing his dignity is an act he has prolonged for a minute too many or for a second too long. The courage though does deserve some credit. And this I would like to give by paying him a little tribute. 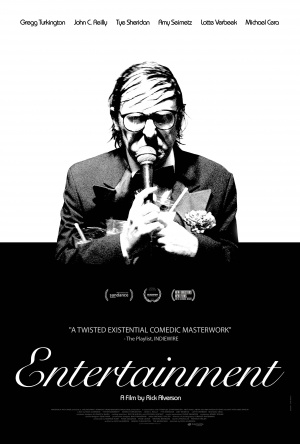