“And you will look with open eyes, And see the world clear, And when your crying is dried up, Then you will feel your heart, And know a new and deeper love” — Alexi Murdoch

There are no men in Céline Sciamma’s (“Girlhood”) Portrait of a Lady on Fire (Portrait de la jeune fille en feu) but the male presence still dominates. Set in an isolated home on the Brittany coast in the eighteenth century, it is the story of an “impossible” relationship between two women in an era that rejected their form of sexual expression. Told with an understated passion, the lovers, Héloïse (Adèle Haenel, “The Unknown Girl”), the daughter of a countess, and artist Marianne (Noémie Merlant, “Paper Flags”), are bound by the rules determined by the patriarchal society in which they live, and the full expression of their love is burdened by the knowledge that it is doomed to end.

Though the film is without stories of taboo, struggle, and self-abnegation and the language often feels contemporary, Sciamma says, “This movie is not about wondering if such a relationship would be possible — it’s not, and they know it. But I wanted to show how luminous and how satisfying it could be. We all know what society thinks — I don’t need to repeat it.” Powerfully supported by cinematographer Claire Mathon (“Atlantics”), Portrait of a Lady on Fire begins in present time and unfolds in flashback. When a student of art instructor Marianne discovers the painting of an elegant young woman with fire consuming the bottom of her dress, the film takes us back to the circumstances that generated the mysterious painting.

Dripping wet from having to rescue her pallet that fell overboard on her voyage to Brittany, Marianne waits in the reception room of a large chateau, placing her wet canvas near the fireplace to dry, smoking a pipe, and helping herself to bread and cheese from the kitchen. She has been commissioned to paint a portrait of Héloïse, but her subject’s angry refusal to sit for a portrait reflects her defiance of her mother, La Comtesse, (Valeria Golino, “Daughter of Mine”) and her wishes for her to wed a Milanese nobleman (whom she has never met) if he approves of her portrait. She is told by the young servant, Sophie (Luàna Bajrami, “Happy Birthday”), that Héloïse’s younger sister had been promised to the same suitor, but has just fallen from a cliff and died, an event Sophie considers a suicide.

Pretending to be her walking companion, Marianne joins Héloïse on her daily walks, closely observing her every feature, then painting her at night from memory in a hidden corner of a room illuminated only by candlelight. During their first walk together, we only see the back of Héloïse’s head until she suddenly begins to run towards the cliff, swiftly pursued by Marianne who is uncertain if she is going to jump or just admire the scenery. Upon reaching the edge, however, Héloïse turns towards the camera, her hood blown off by the wind, revealing her blond hair and the sublime expressiveness of her face, alive with idealism but burdened by the sadness and lack of freedom that defines her life. “I’ve dreamt of that for years,” she tells Marianne. “Dying?” Marianne asks. “Running,” she responds.

The attraction between them is obvious from Marianne’s furtive glances, but it is uncertain how — and even if — it will make itself known. According to Sciamma, “The journey of the gaze, the fact that it’s stolen at first, then consensual, then mutual, then . . . we don’t even know who’s looking at who makes it really physical and organic.” Marianne, however, must comply with the artistic rules, conventions, and ideas of the day even if they render her portrait inert, which Héloïse is not reluctant to point out. Their relationship only begins to grow when the subject begins to return the artist’s glances and surprisingly agrees to pose for her.

Discarding her first painting, Marianne begins again, and it is clear that her new painting will be transformed by their growing bond. Obligingly, her mother goes away for five days, leaving the two alone with Sophie. In a telling sub-plot that reinforces Sciamma’s theme of a women’s right to choose, Sophie is found to be three months pregnant and Marianne and Héloïse deal with the choice she has made with loving care and concern for her well being. Music also plays a large role in the film. One day, the three encounter a large group of village women who are participating in a feminist community ritual, singing the Latin lyrics, “fugere non possum,” which means “I cannot escape,” a metaphor perhaps for the plight of women in that era.

Though the fate of her relationship is sealed, like Elio’s tears by the fireplace in Gaudagnino’s “Call Me by Your Name,” Héloïse’s reaction to hearing Vivaldi’s “Four Seasons” for the first time at a concert is a poignant moment of beauty and power. If Portrait of a Lady on Fire is a heartbreaking film, the pain is rewarded by the knowledge that happiness lies not in months or years but in indelible moments that will always remain with you. The film may or may not allow you to come to terms with these moments, but the tears it evokes can be healing. 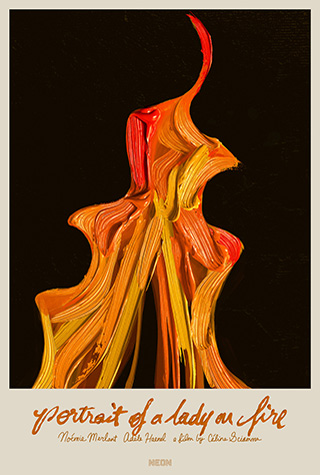