It does feel that the romantic comedy is becoming a lost art. Big movie studios no longer want to invest in it, and if we think back to the biggest one of 2019, it was the movie “Long Shot” starring the odd coupling of Charlize Theron and Seth Rogen. And while it was good and critically lauded, it is not a movie we see making its way into the true rom-com repository which includes the likes of “When Harry Met Sally,” “Sleepless in Seattle” and “You’ve Got Mail” (coincidentally, all these movies star Meg Ryan).

Interestingly, romantic comedies only seems to gain any real traction when they’re handled by Netflix, whose “Set It Up” and “Always Be My Maybe” have generated a lot of recent buzz on social media, and for good reason. Netflix has realized that as audiences have diversified, so to does the romantic comedy need more nuance and diversity than what it has been receiving. If the genre is meant to capture the experience of love on the big screen, then there needs to be variety in the stories that get told. This is why Top End Wedding is such a welcome breath of fresh air — it tells a love story in a genuinely moving way, with the recognition that weddings aren’t about the wedding dress or how good the hors d’oeuvres are.

The film begins with Lauren (Miranda Tapsell, “Doctor Doctor” TV series) and Ned (Gwilym Lee, “Bohemian Rhapsody”), a couple who just had very contrasting days at work. While Lauren’s skills are praised and she lands herself a promotion, Ned realizes that being a lawyer isn’t the occupation for him. So he quits his job and proposes to Lauren, one act spurring on the other. He explains why later on, with quite a beautiful metaphor of life being a room filled with boxes.

In quitting, Ned recognizes that all he has been doing is filling up his boxes with nothing significant. However, Lauren is someone significant, and he sees a life with her as boxes filled with beautiful things. It is moments like this that really sell the romance and love story, because they feel authentic and not overdone. The metaphor isn’t expressed perfectly as well, which really highlights the strengths of the script writing of Joshua Tyler and Tapsell.

Lauren becomes aware that her new title and increased workload would make it very difficult to plan a wedding, given that it is an event that takes at least a year to plan (I speak from experience). She is given ten days to do the deed, which involves her dragging Ned to the top end of Australia (hence the title), and calling all significant family members to head over from Adelaide to Darwin. It all feels a bit manic, and to add to the chaos, Lauren discovers that her mom has run off. Her dad Trevor (Huw Higginson, “Total Control” TV series) is distraught, constantly going to his safe space in the pantry and sobbing to Chicago’s If You Leave Me Now — yes, the man is heartbroken, but that is funny stuff.

The juxtaposition of the masculine space Ned and Trevor share set against that of Lauren and her girls at her bachelorette party is just sheer comedic gold as well. The women dance to Janet Jackson’s Escapade (it is a must for every rom-com to have a dance sequence) while the men watch “Die Hard,” and come to the conclusion that real men walk through glass and pain for the woman they love. The film thus allows men to be sensitive, to weep when they are devastated, to wear their emotions on their sleeves, but also step up to the plate when they need to. This is a nice contrast to the usual display of masculinity in traditional rom-coms, where feelings are kept tightly to one’s chest, and vulnerability is feared until the declaration of love needs to be done.

Lauren and Ned’s relationship is so real and relatable, and I like that Ned can propose in a very normal way, yet be romantic when the occasion calls for it. They face hurdles in their communication with each other, but there is never any doubt on the part of the viewer that they will overcome these obstacles and end up with each other. The best thing about Top End Wedding is that even the sub-plot is equally engaging.

We follow Lauren and Ned as they go on a journey to find Lauren’s mom Daffy (Ursula Yovich, “Around the Block”), who has run away due to an emptiness that she feels within her life. You see, Daffy eloped with Trevor when she was young, leaving behind her life on Tiwi. While she starts afresh in Darwin, there is still a lingering regret that her embracing of a new life that she wanted with a man she loves meant a loss of a past that mattered to her. As the world gets more globalized, I think this is a love story that becomes more common — more and more people are stepping outside their own cultures to marry, but this doesn’t mean they desire abandonment of these cultural traditions that make them who they are.

It is sad to see the cost that sometimes comes with exercising a sense of agency in love, and what makes the movie stand out is that it allows both the poignant and happy moments to stand together. Yes there is a lament of what Daffy left behind on Tiwi, but because she decided to choose Trevor, they created a family together, a family that gives her happiness and that has added so much significance to her life. Top End Wedding is a firm display of amalgamation, giving us a mixed couple, a wedding with mixed traditions, and with an ardent message that new ways does not have to come at a cost of roots and traditions.

Top End Wedding is a wonderful movie, an absolute testament to the beauty and swirling hopefulness of a romantic comedy. 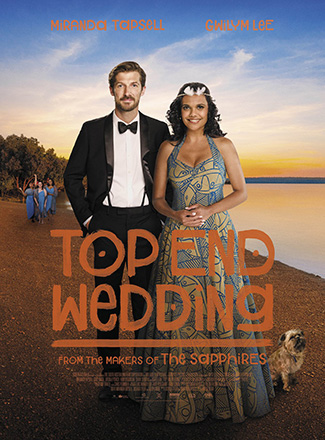