Trauma Center, a brutally dull alleged action movie that nominally stars Bruce Willis (“Glass”) as a world-weary cop, is not the kind of movie that anyone will remember in ten years, or, for that matter, even later this year. Its premise is flimsy, its execution is disjointed, its acting is atrocious, and its conclusion is forgone.

Willis technically plays Detective Wakes (no first name given) and is the star of the movie, but all things considered his screen time is fairly minimal. The real star is Nicky Whelan (“Knight of Cups”), who plays waitress Madison Taylor. Madison’s the lone caretaker of her teenage sister after their mom has died, and she has an aversion to hospitals. Wouldn’t you know it, sister Emily (Lala Kent, “10 Minutes Gone”) has an asthma attack that, for some reason, requires her to be hospitalized overnight. To clarify, she had the attack because she left her inhaler at home. Maybe the hospital and the kindly doctor (Steve Guttenberg, “Police Academy”) don’t trust her to use the inhaler. It’s not important. What’s important is that she’s stuck in the hospital, overnight, the hospital her sister doesn’t want to be in, what with their mom dying in one and all, so the young Emily has to spend the night alone in a scary environment.

Now, lest we hate too much on Madison, she is an overworked waitress with a heart of gold. Hey, someone has to make money to pay the mortgage and take care of her younger sister. So what a stroke of luck it is when Madison, taking the trash out that night, in the dark, is first accosted by a dying, bleeding man and then shot by a couple of unknown assailants. Whoops! Looks like someone’s going to the hospital after all!

Enter Wakes, who’s annoyed about being pulled into a case after already working a double shift. It seems he’s had an informant stashed away somewhere, and now that informant might be in danger. Off goes Wakes, only to find that his man’s been brutally murdered. When word reaches him about Madison’s shooting, he springs into action . . . by showing up at the hospital to tell her things are going to be all right and to call him Steve. Which, I guess, is his first name? See, Madison now has a bullet in her leg, one that the good doctor doesn’t want to remove until the morning, because of reasons. Wakes wants that bullet so that he can run ballistics on it to see whose gun fired the shot. So he has Madison stashed on a vacant floor in the hospital and posts a guard. Note to Hollywood — hospitals don’t have vacant floors, even if they’re specialty floors and there are no suitable patients.The bad guys quickly realize that the bullet can implicate them directly. So they make it their mission to find Madison and remove the bullet. They make the point, several times, of taking care not to kill her. At first, this doesn’t make sense, since all they need is the bullet, and then it makes even less sense, because then she sees their faces and can identify them. But a Macguffin pops up to prop up the plot, thus dragging out Madison’s fate.

If you think that the idea that Madison’s sister Emily is in the same hospital will figure into the story at some point, you’re right. But just as it takes Bruce Willis forever to show up onscreen and even longer to figure out that Madison’s in danger, it takes a long time before Emily’s presence is weaponized. The bulk of Trauma Center is an uninspiring cats-and-mouse game between the two bad guys and Madison. You’d think it’d be pretty easy for two armed men to find a hobbled young woman, especially since the rest of the hospital has been told to stay away from the isolated patient. But there’s no way this movie could have been expanded to 87 minutes if they’d been able to get at Madison right away, so the plot allows her multiple escapes. During the (long) sequence, Madison shows us all she’s not the timid, weak woman we first were meant to take her for. No, she knows skills like breaking open a locked metal door, using an AED to shock a doorknob, or firing a gun. I suppose we could assume she knew all that stuff before, like she was Angelina Jolie’s character in “Salt,” and that would make more sense than her learning it on the fly, under tremendous stress, and (of course) still bleeding quite profusely.

It wouldn’t be fair to say Willis sleepwalks through this role. It’s as if he thought he was merely auditioning and intentionally tanked it. The worst line readings, the least-believable shambling. Even for a guy who has played seemingly thousands of world-weary cops, this performance has to be just about a career nadir for him. He isn’t asked to do much and can’t manage that. Wakes’ job is to show up late, right about when Madison is really at the end of her rope, and then save the day.

We are well into the only-a-paycheck years for Bruce Willis, who presumably has enough money that he doesn’t need to do this kind of work. But it’s not just that Trauma Center is bad, he’s bad in it, and there’s no excuse for the astonishing lack of effort. 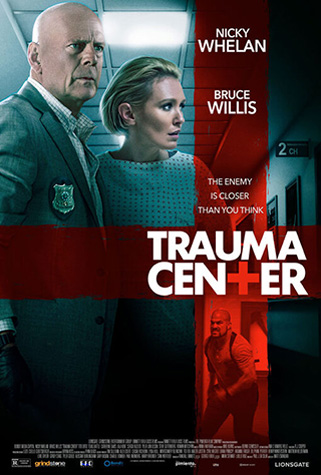