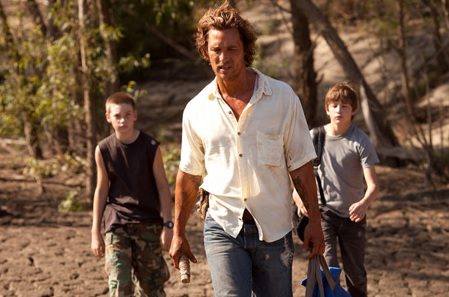 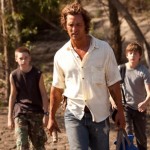 Set on a mighty river in rural Arkansas, Mud tells the story of teenage boys Ellis (Tye Sheridan) and Neckbone (Jacob Lofland) forming an unlikely bond with a mysterious fugitive called, Mud (Matthew McConaughey). Exploring the forest to see if the recent flood really did leave a boat up in a tree, they find not only the boat, but a mud-covered convict, who regales them with fanciful tales of his lady love Juniper (Reese Witherspoon) and the rapscallion that he murdered in order to avenge her honor. He and Juniper are deeply in love, he claims, and as soon as he gets the boat fixed up the two of them are going to sail away together to the great blue sea. All he has to do is not fall in the hands of his victim’s bounty hunting brothers, and get a little help from the boys in acquiring the necessary materials in town.

Neckbone is skeptical, conceding only in exchange for Mud’s prized pistol, but Ellis agrees right away. With his parents on the brink of divorce and his heart set on his own little lady in town, he sees Mud’s fractured relationship with Juniper as a way of proving to himself and the world that true love does exist, even though the obligatory old wise man in the movie tells Ellis that Mud has a habit of fabricating and Juniper has a habit of sleeping around (the “Liar and the Tramp,” a classic American love story), even though Ellis’ love interest is clearly ambivalent about being his girlfriend, even though his dad warns him that you can’t trust people and loving a woman isn’t worthwhile (if you think you know where this is all going, then you’re very right).

Ultimately, this is a coming-of-age story, one whose ending we know all too well, about how much it hurts when someone you love doesn’t love you back, and how much it hurts even when they do. And the title, Mud presumably alludes to the statement the movie makes about human nature, the way we’re all an indivisible mixture of good and bad substances, some part water and some part dirt.

You also know it’s a serious movie from the beginning because Matthew McConaughey is actually (usually) wearing a shirt, and the shirt, in fact, takes on some sort of magical realistic powers, sort of as a symbol of living up to people’s expectations, of doing the right thing, of giving up the only thing you have (literally the shirt off your back) for the people you love, ending up with nothing and starting all over again. The role suits McConaughey well, as he’s good at playing that charming, rugged, equivocal Southerner who you know you shouldn’t trust but kinda want to anyway. Reese Witherspoon’s acting talents are wasted a bit in her stock character, and there’s only one scene, in which she and Mud stare at each other over the great divide of a motel parking lot, that actually makes use of her considerable emotional oeuvre. The real breakout star here, without doubt, is Tye Sheridan, whose silent response to the moment he realizes all the harsh realities of young love is enough to make you want to drown in a lake from sorrow. 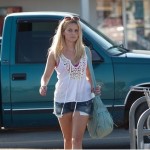 Mud was a hit at Sundance, and it’s plain as water to see why. Nichols employs all of the film techniques that critics love: Slow pacing, fleshed out relationships, complex but sympathetic characters, an exploration of the light and dark elements of human nature, gorgeous shots of pastoral scenes, minimal dialogue, brilliant acting, and coming-of-age themes that never grow old. Furthermore, the film is as American as the can of baked beans that Mud digs into by his campfire, with its Southern drawls, its stoic cowboy masculinity, its vivid snapshot of life on a swamp in rural Arkansas, and its overt homage to Huckleberry Finn and the American cinematic tradition.

But, for the average viewer, Mud might seem a bit like listening to your grandpappy tell the same story over and over again as you nod your head politely as though you haven’t heard it a million times. Sure, it’s sweet and sincere and heroic and heartfelt. But it’s also a little boring and predictable and really rural, kind of like . . . well, kind of like mud.

Diana Bruk is a freelance writer living in NYC. She studied creative writing at Sarah Lawrence College, and completed a Masters in Comparative Literature at the University of Oxford. She writes regularly for MTV Voices, Examiner.com, and Brooklyn Exposed, as well as others. You can find more of her work at www.dianabruk.com. 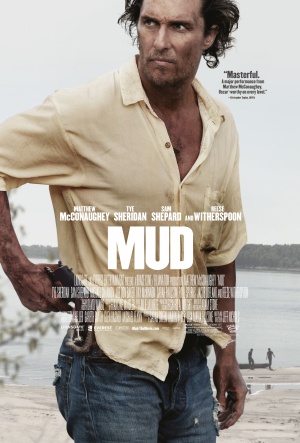