Social media giant Instagram receives some light ribbing in Martin Sofiedal’s four minute short, Instapocalypse, which suggests that a world-ruining zombie apocalypse was actually caused by the public’s unhealthy obsession with their smartphones. This is all a comical setup, established in a clunky piece of expository dialogue, on which to hang a single scene where two human survivors stumble upon a working iPhone and fight over the opportunity to use it.

As silly as the concept sounds, it’s a relatively clever jab at how device-addicted we have become now that smartphones contain so much power over our daily lives. Andrew (Patrick Finzi), the survivor who first mentions Instagram as the thing he misses most from pre-zombie living, is aware of how ridiculous his stance is, but can’t help but mourn the loss of life’s simpler pleasures.

Claire (Cecilie Svendsen, “Benjamin Falck and the Ghost Dagger”), the other survivor, also acknowledges the silliness, but once the pair finds an iPhone in the possession of a seemingly freshly deceased undead stuck in the engine compartment of a junked car, they quickly turn to verbal jabs and then fisticuffs to decide who can get their fix in first.

Slapstick violence ensues as they beat each other up over the phone, but it isn’t all that interesting to watch the cleverness of the satire be capped off with nothing more than standard fight choreography. That’s the extent of Sofiedal’s concept and the very short movie as a whole. It’s a cute idea executed well enough to elicit a few chuckles and that’s about it.

“The Walking Dead” television series, which Instapocalypse is very clearly targeting, is certainly ripe for parody and could use a sense of humor every now and then, so Sofiedal’s aim is mostly on point, even if that shot to the head only grazes the funny bone instead.

'Movie Review: Instapocalypse (2016)' has no comments 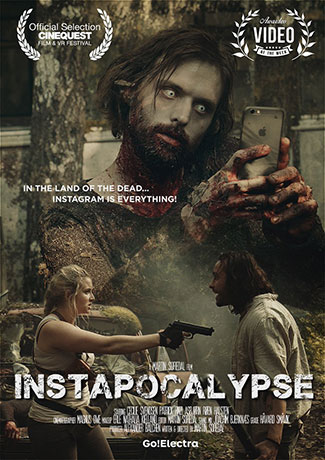