In an era where digital imaging allows anything from polymorphic robots to elongated super-limbs to be seamlessly integrated into live footage, animation could seem redundant. The old adage that “anything is possible in a cartoon” is no longer restricted to animation as anything is possible in any film. Yet we appear to be experiencing a golden age of animation. Mainstream digimation releases such as “Big Hero 6,” “Minions” and “Inside Out” jostle for attention alongside hand-drawn offerings like “The Tale of the Princess Kaguya” and Claymation efforts like “Shaun the Sheep,” all of which have their own merits and demonstrate the potential of the medium. This potential is the breadth and depth of animators’ imagination because, however fantastical a live action film may be, the presence of “real people” creates a sense of groundedness and connection to our own reality, which places certain restrictions upon the film. No such restrictions exist for animation, allowing it greater imaginative scope.

Tomm Moore’s Song of the Sea demonstrates this scope with an animated film that is both beautiful and beguiling, a deeply moving story of family, landscape and tradition that merges myth with modernity. The film explores the myth of the selkie, a being that is part human, part seal, and features the romantic tragedy of a woman who must leave her husband and children to return to the sea. But this is only the beginning of Song of the Sea, as the bulk of the narrative follows children Ben (voiced by David Rawle) and Saoirse (voiced by Lucy O’Connell). Ben and Saoirse live a strained life with their melancholy lighthouse keeper father Conor (voiced by Brendan Gleeson, “Calvary”), who constantly grieves for the loss of his wife Bronach (voiced by Lisa Hannigan), who returned to the sea upon giving birth to Saoirse. Ben is angry and resentful of his sister, blaming her for his mother’s absence and jealous of his father’s attention, bonding more closely with his dog Cú. The main action begins on Saoirse’s sixth birthday. The little girl has never uttered a word and tensions are increased by the arrival of Conor’s mother (voiced by Fionnula Flanagan, “The Guard”), who demands that she take the children back to the city with her. As Saoirse shows signs of wanting to follow her mother into the sea, Conor accepts Granny’s recommendation and sends the children away with her. In the best tradition of stories that feature children who know far better than silly old adults, Ben and Saoirse resolve to make their own way home.

What follows is a quest that is in equal parts heart-warming, funny and moving, rendered in truly beautiful traditional animation. Early sequences of the sea present it as mysterious yet welcoming, deep blues merging with the darker hue of the night sky. Seals appear both animalistic and strangely human, their snouts possibly smiling if looked at in a certain way. The design of the human characters is similarly uncanny. Conor is huge, his hands able to encompass the heads of his children, yet he never appears threatening. Granny is a rotund, potentially comical figure, which serves to distance her from the longer forms of Conor and the children, while visually aligning her with the subsequent character of Macha (also voiced by Flanagan). Similarly, Cú is proportionally larger than any sheepdog would be to a human, but this allows for sequences between him and the children that are both endearing and exciting.

The designs of the characters aid their characterizations, as Conor’s somewhat distant treatment of his children is understandable if not admirable. Ben, meanwhile, could easily have been annoying, but any viewer familiar with sibling rivalry will likely recognize the boy’s resentment. And it proves a façade, as when Ben and Saoirse set off together their bond is unmistakable, Ben’s devotion to his sister unbreakable and deeply affecting. Therefore, we travel with Ben on his inner and outer journeys towards home and family, sharing his anguish and joy in equal measure. Along the way, the children meet various other folkloric figures, including Faeries that have been turned to stone, the Great Seanachai (voiced by Jon Kenny, “Insatiable”) who appears to be all hair, Mac Lir the giant and the Owl Witch Macha, both of whom have their own emotional problems. The film blends these fantastical figures into the film’s overall milieu brilliantly, making the quest of Ben and Saoirse as much through myth as through the countryside. The viewer takes this journey also, travelling through exquisitely detailed landscapes that evoke the sense of a children’s picture book come to life, complete with distant hills and rounded trees, foxes in the fields and landscape cutaways that show subterranean badgers. Best of all are the ocean sequences, plunging the viewer into carefully shaded depths with the seals, an immersion that is no less effective for being in 2D.

Furthermore, Song of the Sea is also a journey into humanity and feeling, as a key theme is learning the right outlet for feelings. This links the film with the higher profile animated feature, “Inside Out,” and while Song of the Sea is less (literally) inward looking than Pixar’s masterpiece, it still explores similar territory of children coming to terms with difficult emotions, not to mention dangerous destinies as Saoirse’s selkie nature and its associated problems become more pronounced. The final act of the film is increasingly tense, as Ben and Saoirse must race against time and fight against family obstacles and what seems to be common sense. How much can be taken on faith is a concern the film grapples with, as the children encounter ever more bizarre situations and can only trust their feelings (which they know to be true). But the film unashamedly embraces its conceit of faith, maintaining a constant sense of wonder and hope in the fantastical. It is to the film’s great credit that it communicates this sense so effectively to its viewer, both through its classical story and its gorgeously rendered animation. 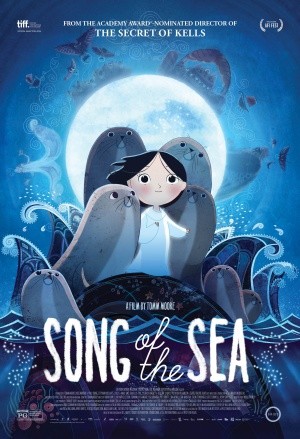